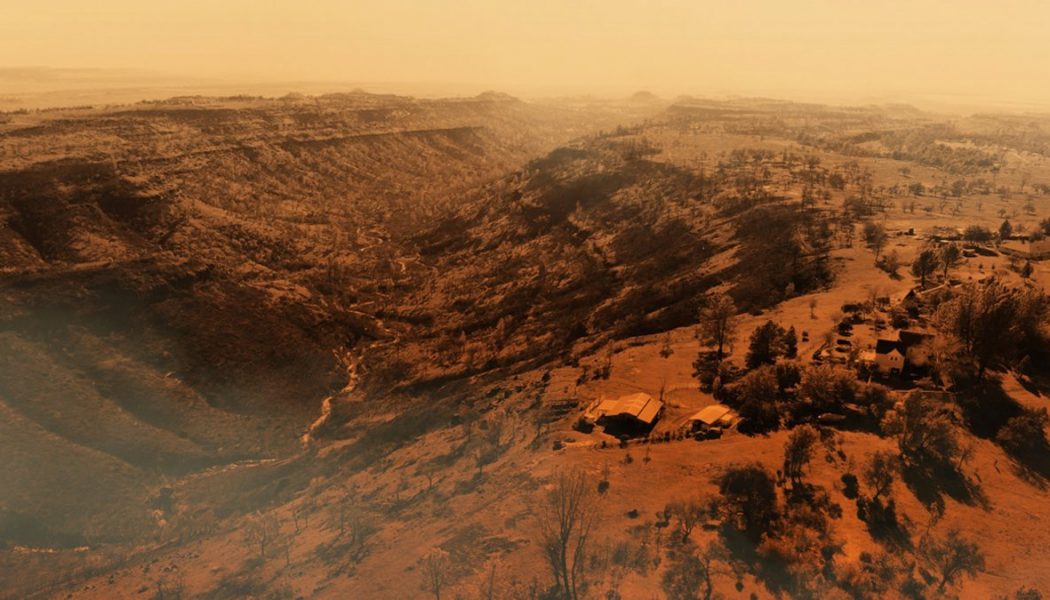 By noon, the skies to the north of the Houstons’ property were pitch-black. Every few minutes they heard the huge explosions of propane tanks erupting. Kathryn had gathered up their pets—three cats, four dogs, a parrot, and a cockatiel—and loaded them into a box trailer parked in the horse pasture, which was bare dirt at that time of year. As the fire drew nearer, they started wetting down the house and nearby vegetation, in hopes that the water would snuff out any stray embers that happened to land.

On his scanner app, Doug heard increasingly horrifying updates about the situation in Paradise. The fire hydrants had run dry, and fire engines struggled to make it through falling trees and downed power lines. The firefighters already on the ground had abandoned attempts to save houses and were focused on saving lives. “Doug heard a lot of things on the scanner that he won’t even tell me about,” Kathryn said.

In Australia, research has shown that many people who intend to stay and defend or wait and see end up fleeing at the worst possible moment, when the reality of confronting a wildfire sinks in. But the Houstons weren’t thinking about escape; they had made their decision, and they planned to see it through.

Around 2:30 P.M., Kathryn headed down to the edge of the property to douse the solar panels before the fire arrived. She was standing there, water pouring off the array, when she heard a sound coming up the canyon that was like nothing she’d ever heard. It wasn’t the crackle of logs burning, and it wasn’t a roar. It was just bone-shakingly loud, so loud that it made it hard to think clearly, and Kathryn stood for a moment, frozen. She was on a patch of gravel, well away from anything that might burn but also in a location where she couldn’t see the approaching flames over the edge of the canyon wall. Maybe this isn’t smart, she thought. But even as the sound of the fire tearing its way through the trees in the canyon grew louder, she didn’t move.

Doug was at the north end of the property, near a large patch of trees. In the aftermath of the 2008 Humboldt Fire, Doug and Kathryn had refinanced their house to purchase the empty parcel north of them so they could thin its overgrown trees and reduce their fire risk. Kathryn had spent countless hours out there with her chainsaw, hauling away tons of timber. But when the fire arrived, it ripped through the remaining vegetation with alarming speed. Doug stood at the edge with a hose, trying to spray down trees that were throwing huge showers of embers toward the house, barn, and other outbuildings. He was wearing an old set of standard-issue firefighting gear, but he didn’t have a helmet or a face shield, and the heat was overwhelming.

“I didn’t realize—I mean, I sound stupid—but I didn’t realize how hot it would be,” Doug said. “It was really hot.” He drew on his military training to focus on the task at hand, but he was sweating profusely beneath the heavy gear, and he felt anxious about Kathryn. He kicked himself for forgetting to pull their walkie-talkies off the charger before the fire arrived.

Down at the solar panels, Kathryn finally made a decision. She dropped the hose and backed up toward the house. Seconds later, everything went silent. The fire had burned through the scrub and brush in the canyon, but when it hit a cleared area at the eastern edge of the property, there was no fuel to keep the flames going. There were still small fires everywhere, but to Kathryn, it felt like the worst was over. She ran around spraying trees and shrubs, trying to keep embers from starting fires near the house.

Meanwhile, Doug’s efforts at tamping down the ember showers were starting to pay off. He began moving west, dousing grass and trees as he went. Across the road, the fire was burning intensely through the scrub that dropped off into the canyon, but on their side, the grass was so short that it hadn’t even caught fire.

As night fell on the Houstons’ property, small fires continued to erupt around them. The canyon behind their house was lit up like a city, with thousands of small flickering lights—trees and shrubs slowly turning to ash. During the Humboldt Fire, many of their neighbors’ homes burned hours after the fire had moved through, as embers that had been smoldering started new blazes. So when Doug and Kathryn felt like the situation on their property was under control, they went to neighbors’ homes, dousing any small fires they came across. But they couldn’t be everywhere. Around 5:30 P.M., a neighbor’s wooden barn suddenly erupted in flames, sending huge licks of fire skyward. Soon the adjacent house was engulfed, too.