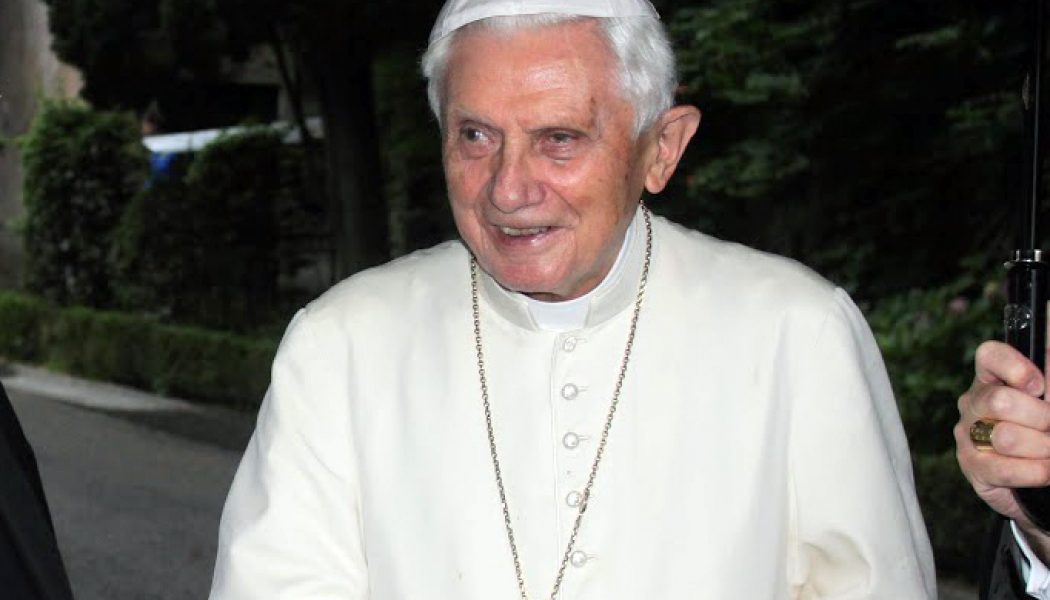 In a wide-ranging interview at the end of the 1,184-page book, written by German author Peter Seewald, the pope emeritus said the greatest threat facing the Church was a “worldwide dictatorship of seemingly humanistic ideologies.”

MUNICH, Germany — Modern society is formulating an “anti-Christian creed” and punishing those who resist it with “social excommunication,” Benedict XVI has said in a new biography, published in Germany May 4.

In a wide-ranging interview at the end of the 1,184-page book, written by German author Peter Seewald, the pope emeritus said the greatest threat facing the Church was a “worldwide dictatorship of seemingly humanistic ideologies.”

Pope Benedict XVI, who resigned as pope in 2013, made the comment in response to a question about what he had meant at his 2005 inauguration, when he urged Catholics to pray for him “that I may not flee for fear of the wolves.”

He told Seewald that he was not referring to internal Church matters, such as the “Vatileaks” scandal, which led to the conviction of his personal butler, Paolo Gabriele, for stealing confidential Vatican documents.

In an advanced copy of “Benedikt XVI – Ein Leben” (A Life), seen by CNA, the pope emeritus said: “Of course, issues such as ‘Vatileaks’ are exasperating and, above all, incomprehensible and highly disturbing to people in the world at large.”

“But the real threat to the Church and thus to the ministry of St. Peter consists not in these things, but in the worldwide dictatorship of seemingly humanistic ideologies, and to contradict them constitutes exclusion from the basic social consensus.”

He continued: “A hundred years ago, everyone would have thought it absurd to speak of homosexual marriage. Today whoever opposes it is socially excommunicated. The same applies to abortion and the production of human beings in the laboratory.”

“Modern society is in the process of formulating an ‘anti-Christian creed,’ and resisting it is punishable by social excommunication. The fear of this spiritual power of the Antichrist is therefore only too natural, and it truly takes the prayers of a whole diocese and the universal Church to resist it.”

The biography, issued by Munich-based publisher Droemer Knaur, is available only in German. An English translation, “Benedict XVI, The Biography: Volume One,” will be published in the U.S. on Nov. 17.

In the interview, the 93-year-old former pope confirmed that he had written a spiritual testament, which could be published after his death, as did Pope St. John Paul II.

Pope Benedict said that he had fast-tracked the cause of John Paul II because of “the obvious desire of the faithful” as well as the example of the Polish pope, with whom he had worked closely for more than two decades in Rome.

He insisted that his resignation had “absolutely nothing” to do with the episode involving Paolo Gabriele, and explained that his 2010 visit to the tomb of Celestine V, the last pope to resign before Benedict XVI, was “rather coincidental.” He also defended the title “emeritus” for a retired pope.

Pope Benedict XVI lamented the reaction to his various public comments since his resignation, citing criticism of his tribute read at the funeral of Cardinal Joachim Meisner in 2017, in which he said that God would prevent the ship of the Church from capsizing. He explained that his words were “taken almost literally from the sermons of St. Gregory the Great.”

Seewald asked the pope emeritus to comment on the “dubia” submitted by four cardinals, including Cardinal Meisner, to Pope Francis in 2016 regarding the interpretation of his apostolic exhortation Amoris laetitia.

Pope Benedict said that he did not want to comment directly, but referred to his last general audience, on Feb. 27, 2013.

Summing up his message that day, he  said: “In the Church, amid all the toils of humanity and the confusing power of the evil spirit, one will always be able to discern the subtle power of God’s goodness.”

“But the darkness of successive historical periods will never allow the unadulterated joy of being a Christian … There are always moments in the Church and in the life of the individual Christian in which one feels profoundly that the Lord loves us, and this love is joy, is ‘happiness’.”

Pope Benedict said that he treasured the memory of his first meeting with the newly elected Pope Francis at Castel Gandolfo and that his personal friendship with his successor has continued to grow.

Author Peter Seewald has conducted four book-length interviews with Benedict XVI. The first, “Salt of the Earth,” was published in 1997, when the future pope was prefect of the Vatican Congregation for the Doctrine of the Faith. It was followed by “God and the World” in 2002, and “Light of the World” in 2010.

In 2016, Seewald published “Last Testament,” in which Benedict XVI reflected on his decision to step down as pope.

Publisher Droemer Knaur said that Seewald had spent many hours talking to Pope Benedict for the new book, as well as speaking to his brother, Msgr. Georg Ratzinger and his personal secretary, Archbishop Georg Gänswein.

In an interview with Die Tagespost April 30, Seewald said that he had shown the Pope Emeritus a few chapters of the book before publication. Benedict XVI, he added, had praised the chapter on Pope Pius XI’s 1937 encyclical Mit brennender Sorge.

Size. 5 ecommerce trends you need to follow for maximum growth in 2022. What rights you have over your data.