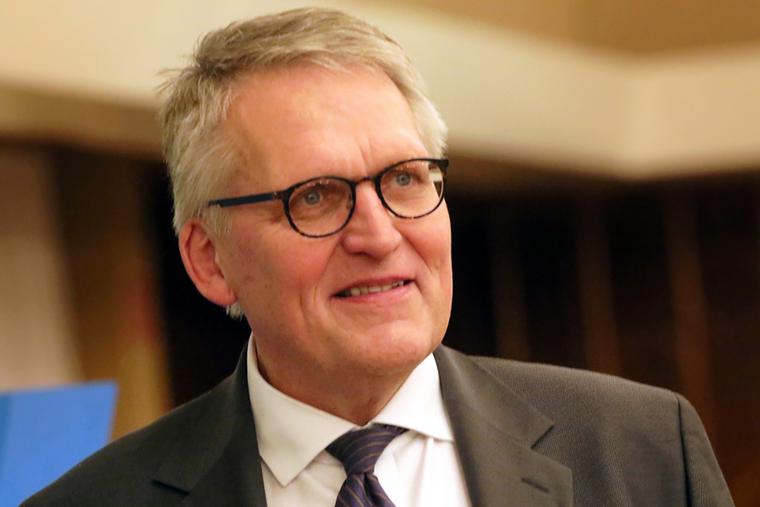 COLOGNE, Germany — The outgoing head of the most influential Catholic lay group in Germany has detailed how he believes the German Synodal Way is geared toward influencing radical changes in the Church and that a well-prepared process is all-important in securing such reform.

In a revealing Nov. 3 interview with a German podcaster peppered with strident statements challenging the Church’s established magisterium, Thomas Sternberg, president of the Central Committee of German Catholics (ZdK), said Church reform occurs “as a process” and that “if one doesn’t hold discussions and initiate movements, then there will be no change.”

A theologian and member of the center-right Christian Democratic Union (CDU) political party, Sternberg welcomed the fact that the issue of women priests was being discussed, and added that thanks to Pope Francis’ apostolic exhortation Amoris Laetitia (The Joy of Love), the issue of blessing same-sex unions has now been “brought to the table.”

At the same time, he blamed canon law for having a “disastrous” effect on the laity, not allowing them to reach the levels of influence envisioned by the Second Vatican Council.

Sternberg will step down this month after six years as head of the ZdK, the most prominent lay organization in Germany, which has a number of active and former politicians among its membership.

The 69-year-old father of five is one of four co-presidents of the Synodal Way and has played a key role in shaping the multi-year consultation that arose from the clerical sex abuse crisis.

The process has been widely criticized for being used as a vehicle to introduce forbidden changes, many affecting the universal Church, such as the ordination of women and the blessing of same-sex unions, as well as radical reform of the sacramental and hierarchical structure of the Church.

Last month, the Register reported on two disaffected Synodal Way participants who warned that the process is dominated by “indignant laypeople” and “trained political activists” who seek to ensure their “radical demands” are met by making them look more moderate.

Interviewed on a podcast called Himmelklar, Sternberg looked back on six years at the helm of the ZdK, and began by saying that he is “very happy that we have a pope whose writings I find wonderful for the most part.

“I could not have imagined 20 years ago that I would give my children a text from the pope on the subject of marriage and family in preparation for their marriage, but Amoris Laetitia can really be recommended to everyone to read. It is a wonderful document. It is always worthwhile to read writings of this pope, I find.”

Asked if that meant the Vatican has changed under Francis, he replied: “I think this Rome is simply a very differentiated entity. At the moment, I have the impression that there is great uncertainty in Rome. On the one hand, the Pope repeatedly does and says things that do not fit into a certain image of papal government — and so there are also uncertainties in the Curia. On the other hand, there also seems to be a certain concern that something could happen in Germany that is not correctly perceived, that is uncontrollable, and that is not properly understood. But again, not everyone is concerned about this.”

Sternberg said it is “unfortunate” that the Synodal Way has received “such disruptive criticism,” adding that the Vatican’s 2020 document on pastoral conversion that proposed methods to better apply existing rules and canonical norms “did not help us.”

“It says what is in Church law. But this canon law is disastrous as far as the question of the laity is concerned and falls way short of the level of the time of the Second Vatican Council,” he said.

In the intervening years, he said John Paul II’s pontificate was “unquestionably important in terms of socio-political relevance” but that it “ended reforms in terms of Church policy.” Paul VI, he added, was the “greatest reforming pope” of the 20th century, “despite that one sentence in Humanae Vitae” — a reference to the Pope’s reaffirmation in the 1968 encyclical of the Church’s ban on artificial contraception. “Those reforms ended in 1978,” he said — the year Paul VI died.

Sternberg recalled how, through Ordinatio Sacerdotalis (Priestly Ordination), the 1994 apostolic constitution ruling that the priesthood is limited only to men, John Paul II “tried to prevent” discussion of women priests. But this “did not work,” he believes, as the issue is “now erupting with an eagerness to be expected if one believes one can prevent discussions.”

He reflected on how “different matters would have been” if, after the 1971-1975 Würzburg Synod that sought to apply the teachings of the Second Vatican Council in Germany, “women had already been ordained as deacons.” That would have “taken a lot of steam out of the issue,” he said. “Instead, there is no argumentation, but simply: ‘That does not exist; we do not do it.’” Such an approach, he believes, has “led to terrible results.”

Regarding the blessing of same-sex unions, Sternberg said the Vatican’s responsum in March ruling out such a possibility was not new as it “unfortunately says what is found in the Catechism and canon law.” But he believes it is “astonishing” that it “admitted at the beginning that homosexual unions exist at all.”

“They had to say that because Pope Francis mentions and names such partnerships in paragraph 52 of Amoris Laetitia,” Sternberg said. “This means that sometimes it is only through answers from Rome that challenges and the need for reform really come to the table” and that “suddenly you realize how far away our practices are from the regulations that still apply,” he said.

Asked how he can remain confident of change in the face of stiff resistance from Rome, and given that the same ideas were presented at the Würzburg Synod but could not be implemented, Sternberg said: “Historians know that change is the most normal thing in the world, and that one thing is certainly not true: that something always stays the way it is.”

“The question is only how frequently, through what processes, and with what collateral damage or collateral benefit change becomes possible,” he reflected. “But change certainly happens.”

Sternberg then revealed how political tactics are used through such consultative processes to push through unpalatable reform.

He reminded his interviewer that he is a politician and that political processes “are actually movements and developments.” The Second Vatican Council, he said, “would not have been possible at all if there hadn’t been something like a liturgical movement beforehand — and if it had not all been prepared theologically. It was all there, in the liturgical movement. And also the dogmatic parts of Lumen Gentium were theologically prepared.”

“If one does not hold discussions and initiate movements, then there will be no change,” he contended, adding that he believes it is “completely out of touch with reality” to think that “reforms and innovations would come by decree from above — suddenly, somehow out of thin air.

“They have always come from below; they have always grown as a result of situations, they are answers to circumstances and to questions,” he said. “The questions that we deal with in the Synodal Way, for example, are only a small part of the problems that exist.”

Sternberg said the German synodal process is not a “general reform process” but responds to a “very specific challenge.”

“But when I see that these questions are now not only attracting such international attention, but also resonance — that they are now being discussed in very many countries and we hear again and again from many people from other countries: ‘Yes, this is being discussed in exactly the same way here, these are precisely our problems and our questions’ — then such questions will naturally also lead to a change in behavior,” he predicted.

But he added that this happens “in a process” — something that can be seen through various examples, he observed, one being a statement from the head of Commission of the Episcopal Conferences of the European Union (COMECE), Cardinal Jean-Claude Hollerich, who said recently he was “open to women’s ordination.”

That was something Sternberg said he “could not have imagined 10 years ago — that someone from the Church hierarchy would actually say that.”

Here are the greatest geek gifts ever created by mankind!. 437 new york. Renting furniture and equipment.