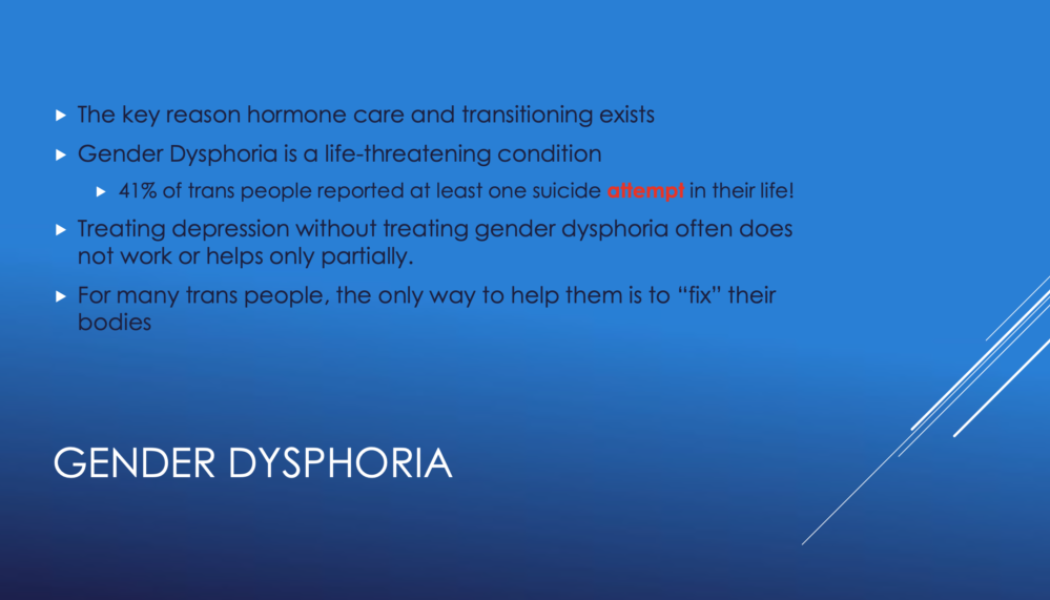 Georgetown University’s School of Medicine is teaching its students to administer puberty blockers and hormone therapy to minors, an investigation by The Spectator reveals.

Medical students were told in a 2021 pre-clinical course that the “only way to help” many transgender people is to “‘fix’ their bodies” through medical intervention. The course also falsely claimed that puberty blockers are “fully reversible.”

Georgetown University did not return a request for comment.

First year medical students at Georgetown are required to take a course on Human Sexuality, which is part of a foundational block on the reproductive system. In an iteration of this course last year, students were greeted with a guest lecture on “Transgender Health Care” by Dr. David S. Reitman. Reitman is an associate professor in the Department of Pediatrics, practices pediatric medicine at Georgetown University Hospital and runs the student health center at American University.

Presentation slides from Dr. Reitman’s lecture warned students that their patients suffering from gender dysphoria will likely attempt suicide if they do not treat them with puberty blockers, “gender-affirming hormone therapy” and surgical sex changes. The slides spend a significant amount of time explaining how to identify and treat transgender children. Reitman claims that children may present signs of gender differences “as early as infancy” and suggests young children might be transgender if they express preferences for clothing, toys or hairstyles typically associated with the opposite sex. Reitman suggests treating children suffering from gender dysphoria by using puberty blocking drugs, which will prevent them from developing “unwanted secondary gender/sex characteristics” —  for example, breast development in females or penile and testicle growth in males. An added benefit of these drugs, Reitman notes, is that transgender individuals may no longer have to undergo surgical sex changes later on in their transition. The lecture slides list several side effects of puberty blocking drugs — including adverse effects to bone density and the aforementioned lack of development of secondary sex characteristics — and admits there are few long-term studies on the potential impacts to a patient’s health. Nonetheless, Reitman still claims that puberty blockers are “fully” and “completely reversible.” The New York Times reported in May 2021 that “more research is needed to fully understand the impact [puberty blockers] may have on certain patients’ fertility. There is also little known about the drugs’ lasting effects on brain development and bone mineral density.” According to Dr. Jessica Kremen, a pediatric endocrinologist for Boston Children’s Hospital’s Gender Multispecialty Service, patients who progress from puberty blockers to hormone therapy — “a typical course for some transgender adolescents” — are more likely to struggle with infertility. Off-label use of Lupron, a common puberty blocking drug for girls who experience precocious puberty, may cause brittle bones, faulty joints, depression, and other long-term negative effects. As of 2020, Britain’s National Health Service no longer described puberty blockers as “fully reversible.”

Reitman’s lecture slides end with graphic images of what is commonly referred to as “bottom surgery” — surgical intervention to reconstruct the genitals — for adult patients. Reitman indicates that patients who undergo hormone therapy and sex changes may need to freeze their eggs or sperm in the event they become infertile or remove the reproductive structures necessary to conceive and/or carry a child.

Catholic hospitals are required to abide by the Ethical and Religious Directives for Catholic Health Care Services offered by the United States Conference of Catholic Bishops. They are thus not allowed to perform treatments or educate medical students on procedures that violate these directives (i.e. abortion).

The Spectator spoke to several Catholic ethicists who indicated that “gender-affirming hormone therapy” — particularly for minors — and surgical sex changes would not be permitted by the USCCB standards.

“To teach future doctors how to help people engage in gender transitioning, I would say, is not ethical and not something that a Catholic medical school should be doing,” said John F. Brehany, the executive vice president and director of institutional relations at the National Catholic Bioethics Center.

He added, “While you can’t point to one specific Catholic teaching that condemns the practice, if you apply traditional moral principles about respect for the human body, both of protecting and taking good care of the body and of not destroying, damaging or sacrificing a part of one’s body except for a very good, well-founded reason, then it would certainly be the position of the National Catholic Bioethics Center that this is unethical.”

“People take GAH to validate their chosen identity, expressly or implicitly rejecting the sexual identity (male or female) God gave to the person,” Hasson said. In addition, GAH turns a person’s healthy body into a medical disaster zone. Taking hormones for purposes of a “gender transition” does more than alter the person’s appearance, it impairs the body’s natural functions, resulting in significant health problems over the long-term, including impaired fertility.”

Bishop Michael Burbidge of the Diocese of Arlington, Virginia, says that individuals struggling with gender dysphoria “should be treated with respect, justice and charity”; however, “to affirm someone in an identity at odds with biological sex or to affirm a person’s desired ‘transition’ is to mislead that person.”

In addition to the “Transgender Health Care” lecture given to first year students at the Georgetown University School of Medicine, fourth year students may take an elective course in “Sexual and Gender Minority Health” that gives them hands-on experience in administering hormone therapy.

The course listing states that students will work a clinical rotation at Whitman-Walker Health in Washington, DC, where they will “be exposed to a diverse array of topics pertinent to providing high-quality care to LGBT individuals, including but not limited to… gender-affirming hormone therapy.”

Hasson explained it’s “not a moral problem for Georgetown to sponsor a clinical rotation at a clinic that provides medical care predominantly to people who identify as LGBTQ” because “every person has dignity and deserves to receive medical care and to be treated with kindness and love”, but that only applies to medical treatments that are otherwise “morally sound.” While future doctors may need to be educated on certain medical practices they might encounter during their career, Georgetown’s course materials cross the line into endorsement and activism.

Brehany explained, “[Future doctors] may well encounter patients who are on these drugs and need to know how they work and impact patients’ health. That is legitimate. But to teach them ‘this is how you assist with gender transitioning’, that is not ethical.”

“The very reason Catholics sponsor medical schools is to bring the light of our Catholic faith to the work of health and healing, not to destroy what is beautiful and perfectly healthy,” Reilly argued. “But teaching students to mutilate the body of a child or an adult is a horrific violation of medical ethics and the mission of Catholic education.”

Reilly asserted that this is not the first time Georgetown, despite its status as the first and oldest Catholic medical school in the country, has ignored Catholic ethical standards.

“In many ways and for several decades, Georgetown University has repeatedly violated the mission of Catholic education, which forms students in both faith and reason. It flouts Catholic teaching without any consequence, and it causes enormous damage by its blatant hypocrisy,” Reilly said. “Catholic families should reject Georgetown out of principle and for the sake of those who might be harmed by studying there.”