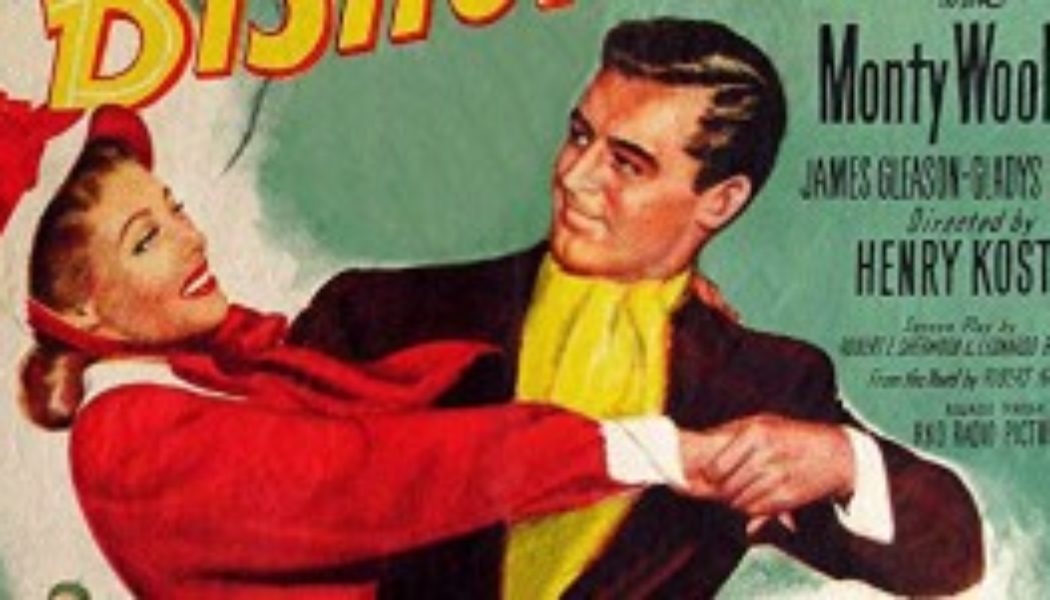 Frank Capra described himself as “a Catholic in spirit” – did he set out to write an allegory of the life of St. Joseph?

No Advent is complete without a viewing of Frank Capra’s masterful film It’s a Wonderful Life. Capra described himself as “a Catholic in spirit; one who firmly believes that the anti-moral, the intellectual bigots, and the Mafias of ill-will may destroy religion, but they will never conquer the cross.” That Catholic spirit comes across in It’s a Wonderful Life.

Watch the film closely and you will discover an uncanny similarity between the hero of the film George Bailey and St. Joseph. I would go so far as to say that the film is meant to be an allegory of the life of St. Joseph.

In the movie, George Bailey and St. Joseph have at least 12 things in common.

1- Both George Bailey and St. Joseph save the life of a boy.

St. Joseph shows the depth of his valor early on in saving the life of the newborn Jesus when the infant is threatened by King Herod’s massacre of the Holy Innocents. In It’s a Wonderful Life, one of the first things we learn aboutGeorge Bailey is that, as a boy, George acted to save the life of his kid brother Harry when Harry had fallen into an icy river and was on the brink of drowning.

2- Both George Bailey and St. Joseph experience a drastic change in their life plan.

St. Joseph has a determined plan for his life: He will marry the daughter of Joachim and Anne and start a family and a career with his wife Mary in Nazareth. George Bailey never stops talking about all the exciting hopes and dreams he has set his heart on. He shops for a suitcase big enough to equip him to travel the globe. He tells his father, “I want to build things, design new buildings, plan modern cities. I want to do something big, something important.” He says: “I know what I’m going to do tomorrow and the next day and next year and the year after that. I’m going to build airfields. I’m going to build skyscrapers 100 stories high. I’m going to build bridges a mile long.” But his ambitions and plans do not pan out as he projects—George Bailey never makes it to Europe, to college, or even out of Bedford Falls. Providence has something else in story for George Bailey … something truly “big and important” that he never imagined.

3- Both George Bailey and St. Joseph are married to a woman named Mary.

At a moment of overwhelming frustration, George Bailey cries out, “I want to do what I want to do.” But then, just as suddenly, George repents of it because he is in the presence of a woman who possesses an exceptional humanity. George can’t help himself. He embraces the woman who is to become his wife … a woman named Mary, whom George’s mother refers to as the “kind that will help you find the answers.” So too for St. Joseph: “He received Mary into his home as his wife” (Mt 1:24).

4- Both George Bailey and St. Joseph are confronted with a life-or-death trial.

The two protagonists, George and Joseph, are called to act decisively in crisis situations that would potentially result in a tragic death. If the authorities in Nazareth were to discover the unwed Mary’s pregnancy, according to the religious law of the time, the Blessed Virgin would have been stoned to death. But St. Joseph, directed by heavenly direction, acts valiantly to prevent the catastrophe. In George Bailey’s case, if George were not to surrender to the intervening ways of God in contending with his own personal struggles, then his despair would lead inexorably to his self-dealt death (jumping from the toll bridge into the freezing river waters below). Both heroes give in to God.

5- Both George Bailey and St. Joseph assume the responsibility for another’s problem.

As disastrous events spiral out of control after his Uncle Billy mislays $8,000, George Bailey takes the blame on himself as he scrambles to find a solution to the fiasco. St. Joseph, learning that Mary is with child, decides to divorce her quietly rather than expose her to the law. Both George Bailey and St. Joseph assume the responsibility for problems that they did not create, and they invest themselves in coming up with an honorable resolution, even to the point of heroic personal sacrifice.

6- Both George Bailey and St. Joseph are helped by an angel.

At the very moment in the life of both St. Joseph and George Bailey when things are going from bad to worse, something miraculous happens: heaven intervenes by God sending an angel to them. The angel reveals the indispensable role each man is to to play in the lives of countless people precisely because they opt to be compliant and to consent to the inbreaking of heaven.

7- Both George Bailey and St. Joseph are people who change their world.

The angel Clarence says to George Bailey: “Each man’s life touches so many other lives. And when he isn’t around, he leaves an awful hole.” George then sees for himself the unmitigated squalor that has consumed his hometown Bedford Falls—all of it brought on because George Bailey was never alive to transform the town. Without the intervention of George Bailey, the decency of clean-cut Bedford Falls gets perverted into Pottersville—liquor stores, dancing clubs, dive bars, strip joints, fight clubs, sleazy hotels, gambling parlors, pool halls, pawn shops, cemeteries. And yet, a world without St. Joseph and his saintly mediation would have resulted in a reality even more abysmal: a world drenched in the decadence of sin.

8- Both George Bailey and St. Joseph are men of exceptional obedience.

Both George Bailey and St. Joseph listen to their angel. They are obedient to the divinely ordered will and plan. Pope Francis says that “St. Joseph was not stubborn in following his own life plans, he did not allow resentment to poison his soul, but he was prepared to make himself disposed to the news that, in a disconcerting way, was presented to him. God had kept a different design for him, a greater mission.” And so too for George Bailey … who is ultimately hailed as “the richest man in town.”

9- Both Bedford Falls and heaven rely on the intercession of St. Joseph.

This is important: pay close attention to how It’s a Wonderful Life begins. As the film opens, we hear people praying, “I owe everything to George Bailey. Help him, dear Father. Joseph, Jesus, and Mary. Help my friend Mr. Bailey.” Why doesn’t the petitioner pray in the usual order of “Jesus, Mary, and Joseph”? With that, we next see two heavenly constellations carrying on a conversation with each other. The first is that of God who says, “Hello, Joseph. Trouble?” Joseph responds, telling God about the predicament of George Bailey. It is Joseph who intercedes to get Clarence the angel sent down to earth to rescue George. And after George and Clarence are thrown out of Nick’s bar, Clarence turns his eyes heavenward and asks: “How am I doing, Joseph? No! I didn’t have a drink!” Later, when Clarence is being pinned down by Bert the cop, Clarence cries out, “Joseph! Oh, Joseph! Joseph!” With that, Clarence suddenly vanishes into safety.

10- Both George Bailey and St. Joseph are men for others.

George is unfailingly other-directed. Even in the midst of his utter desolation, what is the one thing that George Bailey still cares about? His daughter Zu Zu and her rose petals. And, sitting at the bar in Nick’s saloon, with his world collapsing around him, George turns to the weary Clarence seated beside him. Full of empathy and compassion, George says so tenderly, “Hey, little fella, you worry me. You got some place to sleep? You got any money?” Amidst his incalculable misery, George is still thinking about others, solicitous and self-giving. No degree of personal sorrow can thwart the charity he feels for the struggles of others. What better description of St. Joseph is there than that?

11- Both George Bailey and St. Joseph are real fathers.

George Bailey acts as a father to the druggist Mr. Gower who almost makes the fatal mistake of poisoning a customer with a tainted prescription … to the failing Building and Loan Company … to Mr. Martini who calls George “my best friend” because George builds him a house for his family to live in … to his hapless Uncle Billy who displaces $8,000 … to the loose-living Violet Bick desperate for the money to get out of town in order to escape the consequences of her wanton ways—he’s really the father of the entire town of Bedford Falls. St. John Damascene wrote: “St. Joseph not only had the name of father of Jesus, but he also had the reality of it, as much as any man could.”

12- Both George Bailey and St. Joseph surrender themselves to providence.

At the end of the story, George Bailey is victorious, not simply because he is a good guy, but because he consciously decides to accept—and even prays to receive—his God-given destiny. He is a man for others. He is a man, literally, of pro-vidence: one who “looks forward” on behalf of others. St. Joseph is lauded as the provider of the Holy Family and as protector of the Holy Church.

Embracing the Way Things Are Through Prayer

As George Bailey’s life is unraveling into chaos, he sits in Nick’s bar, undone, desperation etched into his face. But at that moment, even though he is not a praying man, George begins to pray earnestly, “Dear heavenly Father, Show me the way. I’m at the end of my rope.” And when George prays, that’s when the angel shows up to help him.

Pope Francis gives us this encouragement:

Just as God told Joseph: “Son of David, do not be afraid!” (Mt 1:20), so he seems to tell us: Do not be afraid! We need to set aside all anger and disappointment, and to embrace the way things are, even when they do not turn out as we wish. Not with mere resignation but with hope and courage. In this way, we become open to a deeper meaning. Our lives can be miraculously reborn if we find the courage to live them in accordance with the Gospel.

That’s what George Bailey did … and that’s what makes life wonderful.