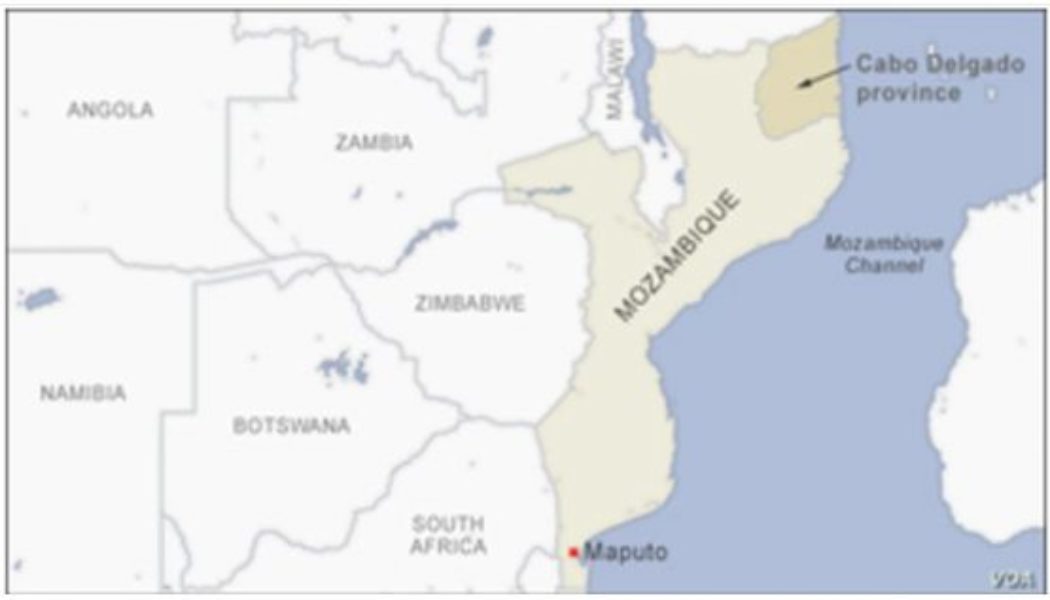 YAOUNDÉ, Cameroon – Fighting in the Cabo Delgado province of northern Mozambique has intensified over the last twelve months, with at least 2500 people killed and over 700,000 forced to flee their homes, according to the United Nations.

Fighting broke out in the Cabo Delgado region of Mozambique in 2017 when a group calling itself al-Shabab — not linked to the Somali Islamist group of the same name – attacked towns in the region.

The rebels have held the port of Mocimboa da Praia since August last year. And they have repeatedly attacked the strategic center of Palma, forcing the French energy firm Total to suspend its $20 billion liquified natural gas project.

As the fighting intensifies, children are paying a stiff price.

“It would be fair to say that abduction of children by terrorists is quite widespread. It’s likely to get worse as the conflict develops,” says Fionn Shiner, Parliamentary and Press Officer for the pontifical charity Aid to the Church in Need, UK.

“Boys are being abducted to be forced into becoming child soldiers. Girls are forced to become child brides: They are raped and subjected to all manner of sexual abuse,” he told Crux.

Following are excerpts of his email conversation with Crux.

Crux: How widespread is the abduction of children by terrorists in Mozambique?

Shiner: Father Kriwiwi Fonseca, an ACN project partner who has been helping families displaced by the conflict, said “we can speak of hundreds.” Save the Children said that “at least 51 children, most of them girls” were seized by armed fighters last year in Cabo Delgado although they think this number is likely to be much, much higher due to underreporting. The International Committee of the Red Cross (ICRC) said between September 2020 and April 2021 it registered more than 2,600 appeals in Mozambique from people who had lost family members, most of whom are young adults and children.

Furthermore, an NGO from within Mozambique called the Rural Environment Observatory stated that more than 1,000 women and girls had been kidnapped, although it is not clear how they reached that number. So based on that I think, it would be fair to say that abduction of children by terrorists is quite widespread. It’s likely to get worse as the conflict develops.

Why are they abducting children?

Boys are being abducted to be forced into becoming child soldiers. Girls are forced to become child brides: they are raped and subjected to all manner of sexual abuse. They want to radicalize them. The boys are brainwashed into becoming terrorists – the “worst kind” according to Father Fonseca. The terrorists put the girls under considerable pressure to convert to Islam and are taught about how to become “good Islamic mothers” according to one survivor’s testimony. There is a strong sexual motivation behind the kidnapping of the girls.

A Catholic nun was also kidnapped. Was this an isolated incident?

Sister Eliana da Costa, the kidnapped nun, was kidnapped with another nun called Sister Ines Ramos. We know that Sister Eliana spent more than three weeks with the jihadists. Jihadists took the two last August, when they took the northern town of Mocimboa da Praia. As of yet we have not received any other similar reports, so it is difficult to say if it is a trend. However, in the aforementioned report by the Rural Environment Observatory, eyewitness accounts said that the Christian girls who didn’t want to convert would become slaves of the fighters.

Daesh (ISIS) claimed responsibility for their first attack in 2019 and it is well known that they targeted Christians in the Middle East. After an attack on Palma this March, in the northeast of the country, Daesh bragged about killing Christians. In May 2020, insurgents attacked a monastery and destroyed a hospital the monks were constructing. In April 2020, a Catholic mission was attacked. Fortunately, there were no deaths in either of these attacks.

It’s widely believed that the insurgents want to establish Sharia law and in that sense, Christians will be in danger. My understanding is that it’s not an explicitly anti-Christian insurgency but Christians are inevitably falling foul of the violence, as is anyone else who doesn’t subscribe to their extreme worldview.

However, it’s an incomplete picture not to mention that government corruption, unemployment and a disaffected youth are also playing a part in driving the insurgency. Some fighters are motivated by anger with the current situation in Mozambique and the Islamists are exploiting this, giving it a religious bent.

The attacks have obviously triggered a humanitarian crisis. How serious is it?

Extremely serious. Since October 2017, according to UN estimates, the violence has displaced more than 700,000 people and killed more than 2,600 people. The UN believes this is going to be a “large and likely long-lasting” humanitarian crisis. Widespread hunger is growing as well as the risk of deadly diseases.

What has ACN been doing to help suffering Christians in the region?

Last March, ACN agreed emergency aid of €160,000 (£136,500) to Mozambique providing beans, flour, cooking oil and other foodstuffs for displaced people facing famine. ACN has also been involved with more pastoral and spiritual support such as help for a Catholic radio station, Radio Sem Fronteiras, which spreads the message of the Gospel. Many communities don’t have transistor radios and so ACN has funded the purchase of a number of small solar-powered radios for these remote communities.

ACN has supported the livelihoods of priests and Sisters in the region, as well as funding the training of seminarians and various other projects related to the pressing needs of the Church in Mozambique.