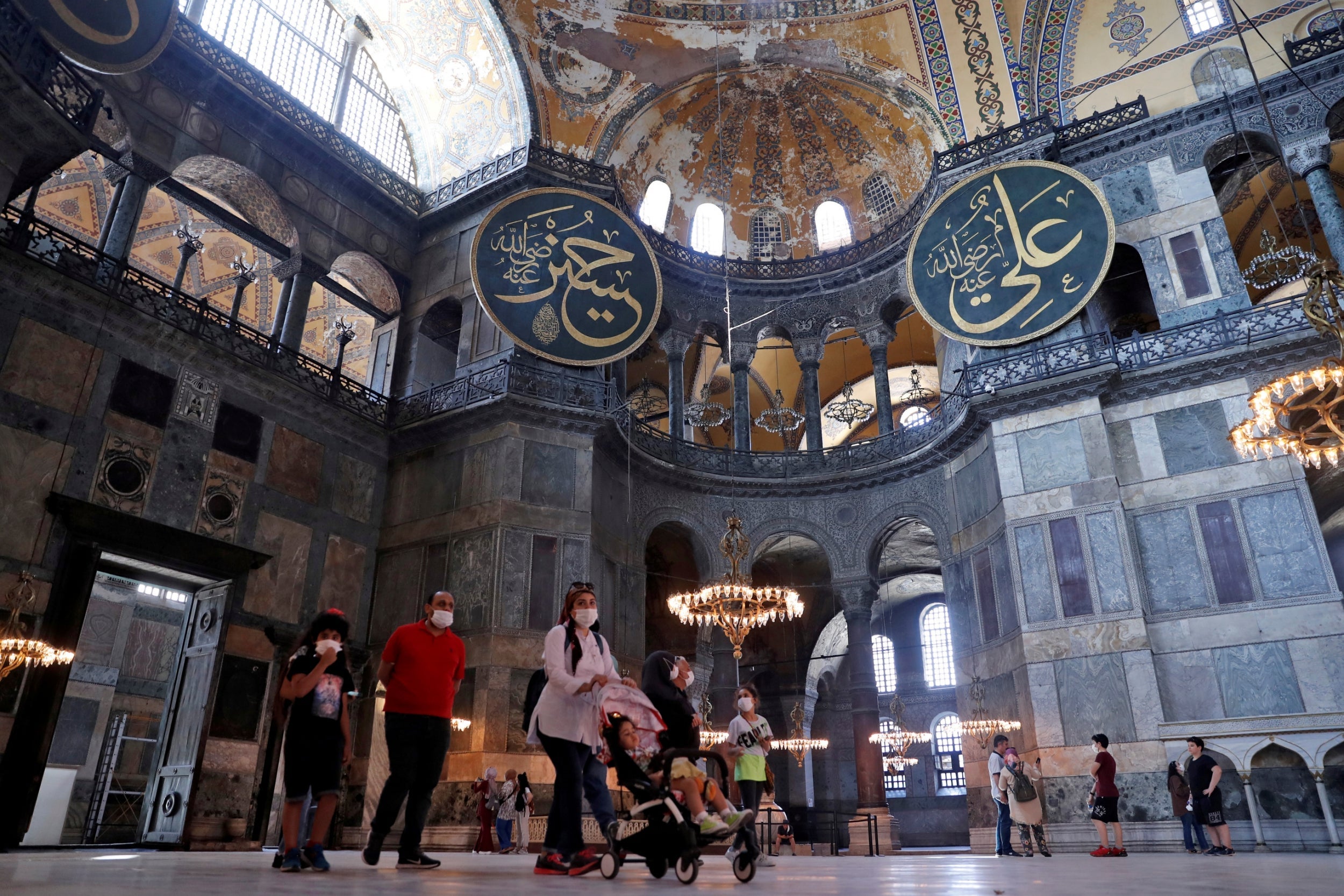 Turkey’s President Recep Tayyip Erdogan has ordered the conversion of one of the world’s most treasured cultural sites into a Muslim house of worship, potentially sharpening the rift between the Ankara government and Europe.

Mr Erdogan signed a decree transferring the 6th-century Hagia Sophia, which had been a museum for nearly 90 years, to the Diyanet, the country’s highest religious authority. In a speech, later Mr Erdogan announced that all entrance fees for the facility would be removed and that a grand reopening of the facility to welcome both worshippers and tourists in two weeks.

“We will be allowing all to enter Hagia Sophia and the doors will be open to everyone, local and international, Muslim nd non-Muslim,” he said. “When they visit they will have a chance to see that the rumours are not true and that we are value what we have inherited from our ancestors.”

Sharing the full story, not just the headlines

The Unesco world heritage site began life as a cathedral, before being transformed into a mosque in the 15th century and later designated a museum under Turkey’s secularist founder Mustafa Kemal Ataturk.

It remains unclear whether converting the architecturally and historically significant building into mosque would result in structural changes – or even new rules for visitors. Mr Erdogan said that some preparations would be announced ahead of the reopening in two weeks, and more in six months. In his speech, he suggested there would be no changes to the structure or to the precious mosaics, which depict the human form, which is considered sinful in Sunni Islam.

Istanbul is full of architecturally significant mosques and cathedrals that draw tourists as well as the faithful.

Worshippers have been allowed to pray in a certain part of the museum since 1991. In 2015, a Muslim cleric recited the Quran inside the Hagia Sophia for the first time since it was designated a museum.

But the move has already angered historic preservationists, members of the Eastern Orthodox faiths and western religious freedom advocates. The site is also a major tourist draw, among the most cherished of Istanbul’s archaeological wonders, and some in the travel industry have voiced concern it could alienate potential visitors. The site drew 3.7 million visitors last year.

The drive to turn the sprawling building into a mosque, as demanded by pious Turks for decades, had become a matter of international concern. US Secretary of State Mike Pompeo urged Ankara to maintain the status of the site as a museum “as an example of its commitment to respect the faith traditions and diverse history” that make up modern Turkey.

“The United States views a change in the status of the Hagia Sophia as diminishing the legacy of this remarkable building and its unsurpassed ability—so rare in the modern world—to serve humanity as a much-needed bridge between those of differing faith traditions and cultures,” he said in a statement on Thursday.

Others worry the move symbolises a further deterioration of interfaith relations at a time of rising nationalism and identity politics. For secular Turks, changing the status of the Hagia Sophia is yet another example of rising Islamicisation under Mr Erdogan and his conservative Justice and Development Party (AKP), which has been the dominant political power in Turkey for nearly 18 years.

Hours before Mr Erdogan’s decree, Unesco issued a statement urging negotiations and warning that the “effective, inclusive and equitable participation of communities and other stakeholders concerned by the property is a necessary condition for the preservation of heritage and for the enhancement of its uniqueness and significance.”

In a speech last year, Mr Erdogan chided his own supporters for demanding the facility be converted, noting that Turkey’s faithful rarely manage to fill the country’s existing mosques.

But Turkey’s economy has deteriorated and polls have shown declining popularity for Mr Erdogan’s party, especially among the young. Mr Erdogan has increasingly sided with religious nationalists in the country’s culture wars.

“Asking for the Hagia Sophia to be a museum is like asking to convert the Vatican into a museum,” Mr Erdogan said. He warned that that international criticism of Turkey’s decision amounted to violations of the country’s sovereignty and independence.

Still, ranking Turkish officials have sought to reassure the world that allowing prayers at the facility will not alter its status.

“Turkey will still preserve the Christian icons there, just like our ancestors preserved all Christian values,” Ibrahim Kalin, a senior adviser to Mr Erdogan, told the official Anadolu News Agency on Thursday,.

He cited France’s Notre Dame Cathedral as a world-famous house of worship drawing both tourists and the pious.

“Opening up Hagia Sophia to worship doesn’t keep local or foreign tourists from visiting the site,” he said, “So a loss from the world’s heritage is not in question.”

The Hagia Sophia served as an Orthodox Christian cathedral for 1,000 years before it was turned into a mosque after the 15th Century Ottoman conquest of what was then the capital of the Byzantine Empire.