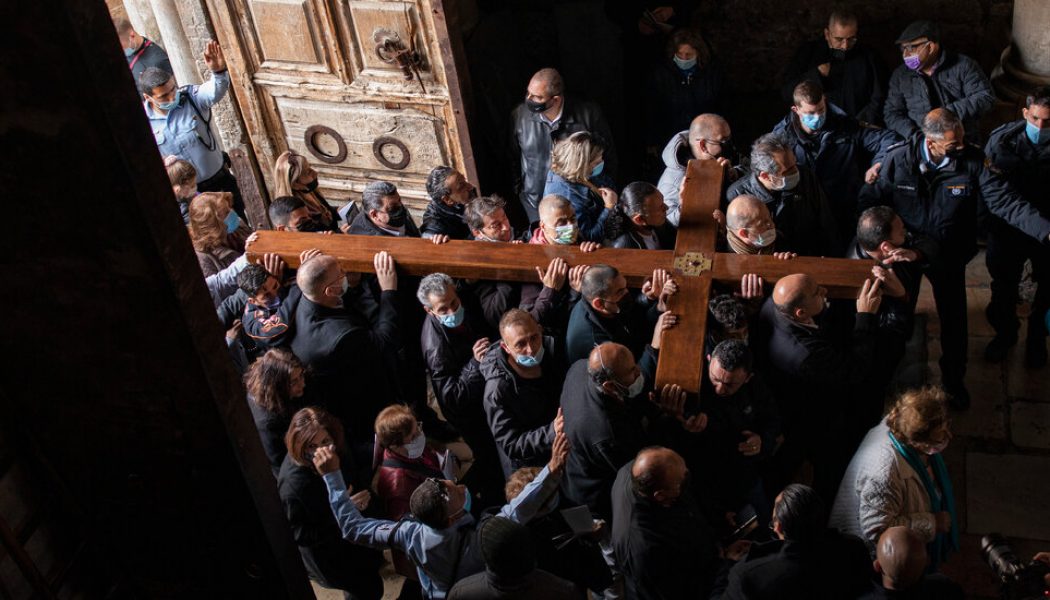 JERUSALEM — On Friday morning, in the Old City of Jerusalem, in the limestone alleys of the Christian quarter, it was as if the pandemic had never happened.

The winding passageways that form the Via Dolorosa, along which Christians believe Jesus hauled his cross toward his crucifixion, were packed with over 1,000 worshipers. In the covered market, the air smelled of incense and echoed with Christian hymns. The Good Friday procession, where the faithful retrace the route Jesus is said to have taken, was back.

“It is like a miracle,” said the Rev. Amjad Sabbara, a Roman Catholic priest who helped lead the procession. “We’re not doing this online. We’re seeing the people in front of us.”

Pandemic restrictions forced the cancellation of last year’s ceremony and required priests to hold services without congregants present. Now, thanks to Israel’s world-leading vaccine rollout, religious life in Jerusalem is edging back to normal. And on Friday, that brought crowds once again to the city’s streets, and relief to even one of Christianity’s most solemn commemorations: the Good Friday procession.

“We are so lucky to be here,” said May Bathish, a 40-year-old chorister at Father Sabbara’s church in the Old City. “When you walk the same steps that Jesus did, it is the highest privilege.”

For much of the past year, the pandemic kept the Old City eerily empty. Its shops, synagogues and churches were often shuttered, its alleys bereft of tourists and pilgrims. But with nearly 60 percent of Israeli residents fully vaccinated, the city’s streets were once again thrumming, even if the foreign tourists were still absent.

At the gathering point for the procession on Friday, there was scarcely space to stand. Police officers blocked latecomers from entering from nearby side streets. Members of a Catholic youth group formed a ring around the bearers of a large replica crucifix, the centerpiece of the procession, to spare those carrying it from the jostles of a sea of worshipers.

Many of those in the procession were Palestinians who became Israeli residents after Israel captured the Old City in 1967, along with the rest of East Jerusalem. Around 6,000 Christians live in the Old City, alongside Muslims and Jews.

Above the hubbub, Father Amjad called on his congregation to walk in pairs. “Two by two,” he shouted through a loudspeaker. “Not one by one!”

Then the crowd moved slowly off, singing mournful hymns as they proceeded along what Christians consider a re-enactment of Jesus’ last steps.

They walked in fits and starts down the Via Dolorosa, past the site where tradition holds that Jesus was tried by Pontius Pilate, past where he was flogged and mocked, past the shops selling Christian icons and crosses, ice cream and T-shirts.

They turned left and then right, over the places where Christians believe Jesus stumbled — once, twice, three times — under the weight of the crucifix.

In the alley outside the chapel of St. Simon of Cyrene, the marchers trailed their fingers over an ocher limestone in the chapel wall. According to tradition, Jesus steadied himself against the stone after a stumble. And so many pilgrims, over so many centuries, have since caressed the stone that its surface is now smooth to the touch.

Finally, they reached the Church of the Holy Sepulcher, which believers think was the site of Christ’s crucifixion, burial and, ultimately, resurrection.

For some, the Good Friday procession carried even more resonance than usual — its themes of suffering, redemption and renewal seeming particularly symbolic as the end of a deadly pandemic appeared finally in sight.

“We have gained hope again,” said George Halis, 24, who is studying to be a priest and who lives in the Old City. “Last year was like a darkness that came over all of earth.”

For others, there was a theological importance, as well as an emotional one, to being able to gather together again.

“All Christians are part of the body of Christ,” said Msgr. Vincenzo Peroni, a Catholic priest based in Jerusalem who has regularly led pilgrimages within the Holy Land. “Being able to celebrate together makes that more visible.”

But for now, that togetherness still faces limits. There are still restrictions on the number of worshipers at Easter services. Masks are still a legal requirement. And foreigners still need an exemption to enter Israel — keeping out thousands of pilgrims, to the cost of local shopkeepers who depend on their business.

“It still feels like it’s not normal,” said Hagop Karakashian, the owner of a famous ceramics shop in the Old City, whose family designed the neighborhood’s street signs. “The locals can celebrate, yes. But something is still missing.”

The mood among Christians a few miles away, in the Palestinian cities of Bethlehem and Ramallah, was even less jubilant. Christians in the occupied territories can visit Jerusalem only with a special permit, which has become even harder to procure during the pandemic. While most Israelis are now vaccinated, the vast majority of Palestinians haven’t received a dose.

Israel has supplied vaccines to more than 100,000 Palestinians living in the occupied West Bank, almost all of whom work in Israel or West Bank settlements. Palestinian officials have obtained around 150,000 more doses.

But Israel says it isn’t obliged to vaccinate the rest of the Palestinian population, citing a clause of the Oslo peace accords of the 1990s, which transferred health care duties to Palestinian officials. Critics say it is still Israel’s responsibility to help, citing international legislation that requires an occupying power to oversee health care for occupied populations, as well as a separate clause of the Oslo accords that says Israel must work with Palestinians during epidemics.

Either way, infection rates are still high in the occupied territories and vaccination rates are low — and that has limited the number of Palestinian Christians granted permission to enter Jerusalem for Easter this year. A spokesperson for the Israeli government declined to reveal the final number.

“Without permits, we cannot come,” said the Rev. Jamal Khader, the Roman Catholic parish priest in Ramallah. “It’s a sign of the continuous presence of occupation and the limitations on movement.”

But Christ’s crucifixion and resurrection still provide spiritual nourishment for a despondent population, said Father Khader, who is allowed to enter Jerusalem through his work with the church.

“We identify with the sufferings of Christ on Good Friday,” he said.

“Then,” he added, “we find some hope on Easter Sunday.”