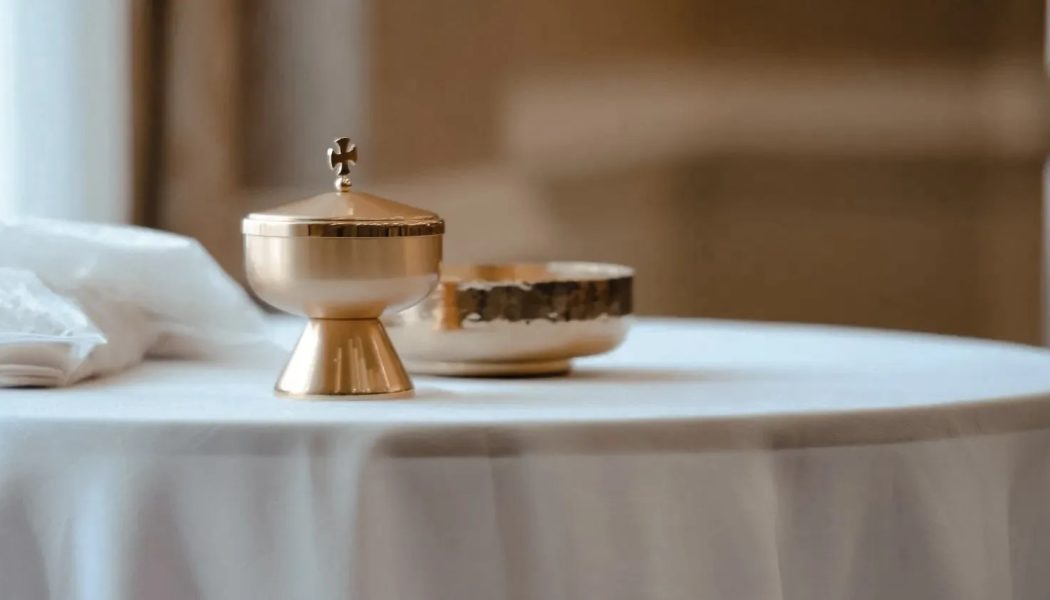 Jesus gives a lesson in humility that he fulfills in the most amazing way possible on the 22nd Sunday in Ordinary Time Year C.

What he does is so amazing, in fact, that many Christians in America simply don’t believe he actually did it.

Jesus enters the home of a leading Pharisee and is watched very carefully by his guests.

The Gospel passage in Mass from Luke starts on the first verse of Chapter 14, and then immediately leaps to Verse 7. The first verse reminds us that Jesus is dining among enemies who are always looking for evidence to prove that he’s not as special as he claims. This, of course, is exactly what Christians face in an increasingly secular culture. People watch us, eager to say, “See, those Christians aren’t anything special!”

Jesus’s advice is very much targeted toward this very situation: What do you do when people are watching you, judging your every move? His answer: Show them how Jesus Christ himself acts.

“Do not recline at table in the place of honor,” he says. “A more distinguished guest than you may have been invited by him, and the host who invited both of you may approach you and say, ‘Give your place to this man,’ and then you would proceed with embarrassment to take the lowest place.”

On the one hand, Jesus is describing a nightmare scenario for a proud person. But his goal isn’t really to give proud people advice on preserving their egos — as the First Reading makes it clear, easing the way for pride is never God’s M.O. Instead, Jesus knows that this “nightmare scenario” is an even more costly disaster for an emissary of Christ and he wants to prevent that. The proud person will lose face; the emissary of Christ will lose the credibility he needs to evangelize. Jesus has an answer:

“Rather, when you are invited, go and take the lowest place so that when the host comes to you he may say, ‘My friend, move up to a higher position.’ Then you will enjoy the esteem of your companions at the table.’”

This is Jesus saying, “The meek shall inherit the earth — for starters, by not getting embarrassed at parties. But then, by influencing the party for God.”

But Jesus is himself the best example of just how powerful humility can be.

The Second Reading, from Hebrews, describes the great God that Israel has known for millennia.

God is so great that when he appears on Mount Sinai it is cloaked in “a blazing fire and gloomy darkness” and with “storm and trumpet blast” and Moses warns that if they touch the mountain, they will die, and where we learn that the people “begged no further message be addressed to them.”

Jesus is the divine Second Person of the Trinity, so all of that is a description of him. His divine majesty and total otherness puts an infinity of distance between us and him. But Jesus comes nonetheless and dines with Pharisees who disdain him as an inferior. And even then, Jesus takes the least place at the Pharisees’ table.

Jesus takes an even lower place at our table this Sunday: He’s the food.

As the Second Reading puts it, Jesus is “the mediator of a new covenant, and the sprinkled blood that speaks more eloquently than that of Abel.” Jesus established the new covenant by being humble and obedient, even to the cross — and continues the new covenant by making us present at his sacrifice, on the Eucharistic table at each Mass.

God’s voice that was so terrifying that the people begged him to be silent is the one who today says, “He who humbles himself will be exalted.” The God of “storm and trumpet blast” takes a lower place to lift us up, forgiving us in confession and hearing our prayers. God, the untouchable one, comes to be received in our very bodies.

And after all that humility on his part, it’s our job to exalt him: to light the candles, incense the altar and bow before him. As Pope Benedict XVI put it in his first message as pope: “I ask everyone in the coming months to intensify love and devotion for Jesus in the Eucharist, and to express courageously and clearly faith in the Real Presence of the Lord, especially by the solemnity and the correctness of the celebrations.” (Emphasis added.)

Jesus gives one last way to imitate his humility.

Every lesson of Jesus’s seems to end up being, in part, “Serve the poor.” His lesson on humility is no exception.

Let’s go back to that dinner with the Pharisees where Jesus is being watched like a hawk, and remember that we, too, are being watched in whatever we do.

Rather than act proud and lose credibility, Jesus says, “When you hold a lunch or a dinner, do not invite your friends or your brothers or your relatives or your wealthy neighbors, in case they may invite you back and you have repayment. Rather, when you hold a banquet, invite the poor, the crippled, the lame, the blind; blessed indeed will you be because of their inability to repay you.”

This is the express opposite of the current practice of fancy fundraising dinners. Jesus is asking that our attention focus on serving those who will never repay us and haven’t earned it. Then, and only then, will people respect us, and through us, Our Lord.

And this, again, is what Jesus Christ does every Sunday. He invites us to a dinner that outclasses us by light years. The Second Reading describes it as a heavenly banquet, this way:

“You have approached Mount Zion and the city of the living God, the heavenly Jerusalem, and countless angels in festal gathering, and the assembly of the firstborn enrolled in heaven, and God the judge of all, and the spirits of the just made perfect.”

When we come to Mass we clearly belong in the lowest seat. It is only through a miracle that Christ finds a lower place, and it is only through pure grace that he exalts us to the very heights of reality.