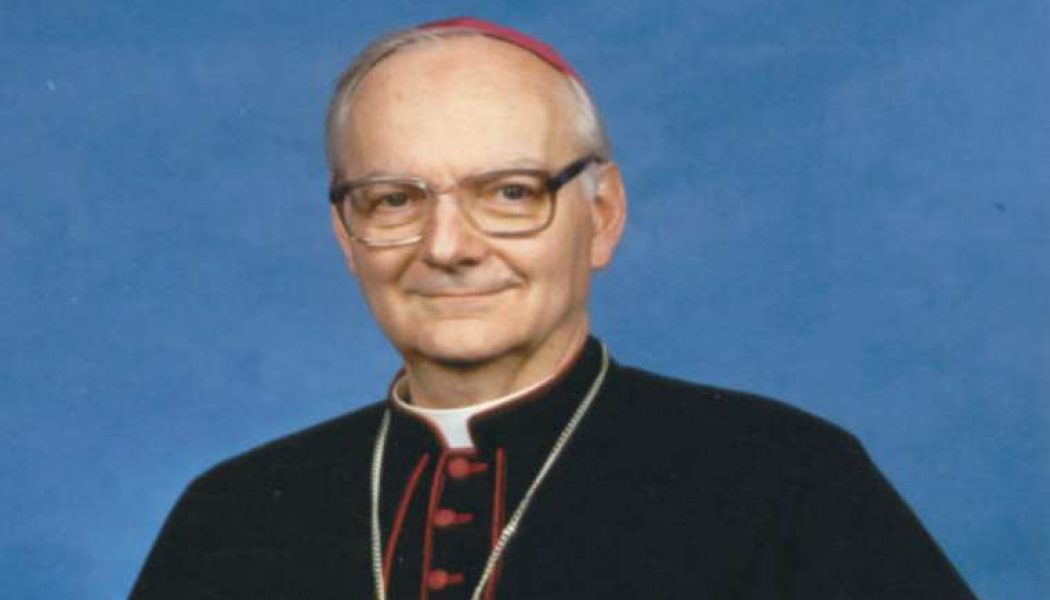 Buffalo, N.Y., Jan 3, 2020 / 06:01 pm (CNA).- A lawsuit against the Diocese of Buffalo and retired Bishop Donald Trautman claim they covered up a New York priest’s sex abuse of a 10-year-old boy in the mid-1980s, though the bishop has previously denied accusations he has ever covered up abuse.

Trautman, now 83, retired as Bishop of Erie in 2012. He served in various roles in the Buffalo diocese under Bishop Edward Head, including chancellor and vicar general. He was ordained an auxiliary bishop for the diocese in 1985. He had been Bishop of Erie since 1990.

Trautman told the Erie Times-News Jan. 2 that he had not been served with the lawsuit.

In June 2019, he told the Buffalo News he didn’t cover up any sexual abuse as chancellor of the Buffalo diocese.

The plaintiff in the case was born in 1974. The lawsuit said the plaintiff was abused multiple times by Smyczynski for about a year, starting when he was a ten-year-old student and altar boy. According to the lawsuit, the plaintiff met the priest at Infant of Prague Catholic Church and school in Cheektowaga, New York.

The lawsuit alleges that Trautman knew of the priest’s abuse and failed to investigate and report it. It alleges that he and the diocese “participated in covering up such heinous acts by moving errant priests and clergy members from assignment to assignment, thereby putting children in harm’s way.”

The lawsuit further accuses Trautman of expediting an annulment for a member of the plaintiff’s family “with the hope of ensuring their silence about the abuses perpetrated by Fr. Smyczynski and covering up those abuses.” It claims he continued the alleged cover-up while in the Diocese of Erie.

The lawsuit was filed by Danielle George of Phillips & Paolicelli law firm in New York City and Paul K. Barr of Fanizzi & Barr in Niagara Falls.

Barr said Trautman made a “paltry” settlement with the plaintiff that “amounts to hush money.” The sum was four figures and allegedly an inducement not to share their story. He alleged that this allowed the priest to abuse at least one other child.

He accused Trautman of hastening the annulment of the plaintiff’s parents.

CNA contacted Bishop Trautman for comment but did not receive a response by deadline.

The two dioceses named in the suit have also responded.

“The diocese has not yet received the complaint – nor any information regarding the lawsuit,” the Buffalo diocese told CNA Jan. 3. “As soon as the diocese receives the complaint, and the name of the person making the complaint, it will follow established protocols which involve a thorough investigation and will then take all appropriate action.”

The diocese said it is “assessing the appropriate level of additional detail relating to those credibly accused that may be provided as part of the diocese’s ongoing reporting, which may contribute to the healing of survivors, who continue to be our first priority.”

Bishop Edward Scharfenberger of Albany now serves as apostolic administrator of Buffalo, following the resignation last year of Bishop Richard Malone, who was accused of covering up sexual abuse. Although he denied these accusations in November 2018, in April 2019 he apologized for his handling of some cases. In August 2019, a RICO lawsuit was filed against the diocese and Bishop Malone, alleging that the response of the diocese was comparable to an organized crime syndicate.

The Buffalo diocese said Jan. 2 it “strongly encourages” all allegations of sexual abuse of clergy and diocesan employees to be reported to law enforcement first.

“The diocese has in place rigorous protocols for reporting as well, in addition to a third-party reporting system … which allows for allegations to be reported anonymously,” said the Buffalo diocese, which noted that its own review board advises on actions that may be necessary under canon law when allegations are determined to be credible.

The Erie diocese said Jan. 2 it learned it had been named in the lawsuit about alleged activities in the Diocese of Buffalo before Trautman was named Bishop of Erie.

“Bishop Lawrence Persico has seen a copy of the suit, but the diocese has not been served,” the Erie diocese said. “As with any litigation, Bishop Persico will cooperate, but will not comment during the legal process.”

The lawsuit’s claims about the Erie diocese do not include improper handling of abuse. Rather, it claims that the diocese is implicated in the alleged cover-up because Trautman was its bishop and he “perpetrated” a policy to cover up abuse, the Erie Times-News reports.

It alleges that both dioceses had a “cover-up” policy which “resulted in the sexual assault of untold numbers of children, and put numerous other children at risk of sexual assault.”

It charges that Trautman “took his playbook of covering up clergy abuse from Buffalo, New York, to Erie, Pennsylvania… where he continued to carry out the aforesaid cover up for decades.”

The lawsuit was announced at a press conference organized by Buffalo resident James Faluszczak, an advocate for sex abuse victims and a former priest of the Erie diocese. He has said a priest abused him when he was a teenager.

The lawsuit takes advantage of a new one-year legal window for sex abuse victims to sue regardless of statutes of limitations, the result of recent legislation in the New York legislature. A similar Pennsylvania bill failed to pass the General Assembly.

Pennsylvania Attorney General Shapiro criticized Trautman at an August 2018 press conference releasing his grand jury report on clergy sex abuse. He alleged that the bishop failed aggressively to pursue an abuser. He has charged that the Erie diocese under Trautman curbed its investigation of sex abuse claims to wait out the statute of limitations.

Trautman in his responses to the attorney general said the claims were “baseless.” He said he did not condone or enable such abuse during his tenure leading the Diocese of Erie, and he stressed his support for abuse victims and said the report does not fully or accurately assess his record. He cited a Pennsylvania Supreme Court finding that the grand jury process suffers “limitations upon its truth-finding capabilities” and lacked “basic fairness.”

Shapiro’s report, released in August 2018, claimed to have identified more than 1,000 victims of 301 credibly accused priests in Pennsylvania. It presented a devastating portrait of alleged efforts by Church authorities to ignore, obscure, or cover up allegations—either to protect accused priests or to spare the Church scandal.

Trautman had caused controversy by criticizing the report.

“We should not be so naive as to accept every government report every attorney general report as being totally accurate or honest and I wouldn’t cite the Philadelphia Inquirer or Boston Globe as sources of confident information,” he said at the U.S. Conference of Catholic Bishops’ general assembly in fall 2018.

Bishop Persico, his successor in Erie, has been publicly supportive of abuse victims. He said Trautman spoke as a retired bishop, adding, “he doesn’t represent the diocese so what he’s doing is giving his opinion.”

However, the attorney general report has come under criticism from longtime Catholic commentator Peter Steinfels. In a lengthy essay published in January 2019 by the magazine Commonweal, Steinfels argued that many of the report’s charges are “grossly misleading, irresponsible, inaccurate, and unjust.” He said the report deserved more thorough scrutiny and said its “sensational charges” have been too easily accepted.

During a 2018 debate among the U.S. Conference of Catholic Bishops, Trautman opposed the idea of a third-party reporting system that would allow allegations of sexual abuse by bishops or mishandling of abuse complaints by bishops to be delivered to the nuncio, the pope’s representative in the U.S.

Trautman said he thought such a system was “dangerous and unjust” because it would bring to the U.S. nuncio accusations that were “not investigated, not substantiated, not proven. That’s unjust.”