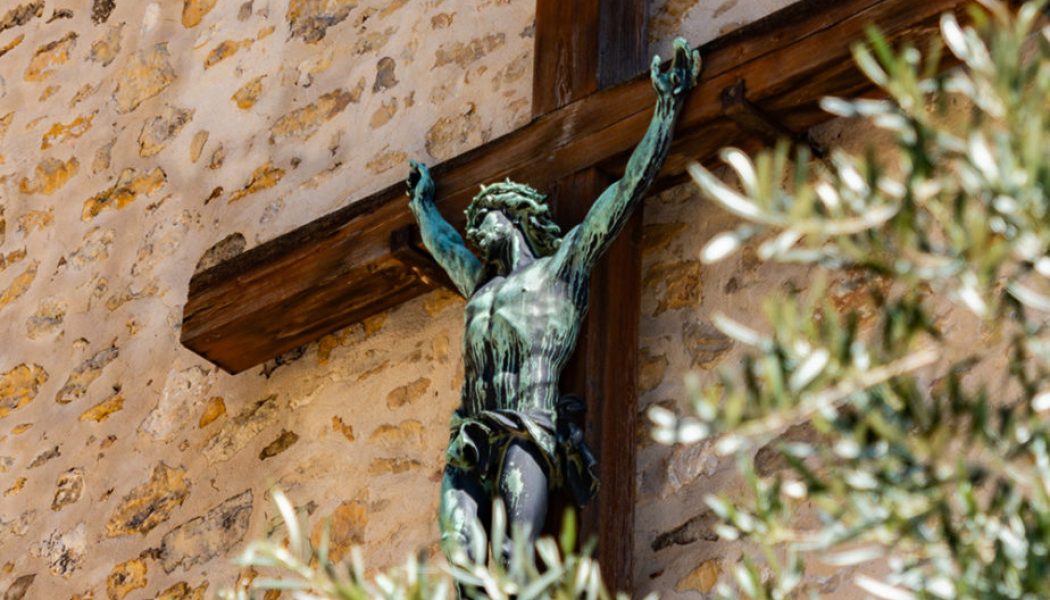 Sometimes I decide what I’m going to write about. And sometimes God does.

I just came back from the FOCUS conference in Phoenix. It was awesome, incidentally, and I highly recommend that you all look into it for next year. Yes, it is sponsored by the Fellowship of Catholic University Students. And yes, there are a lot of college kids there. But there is also a marvelous adult track, with wonderful speakers and fabulous activities.

But I digress. The very first speaker was Father Mike Schmitz, and the theme of his talk was that Jesus is not “optional.” It was a wonderful talk and gave me so much spiritual food for thought.

I wrote “Jesus is not optional” in my little column ideas list.

Then I came home and went to a movie. The movie, A Hidden Life, was about Franz Jagerstatter, the Austrian conscientious objector who was executed by the Nazis in 1943. Also highly recommended. In the movie, there is a scene where Franz is talking to a man who paints frescos in the church. He’s talking about how he paints Jesus as nice, unthreatening. He says he does it because “[W]e create admirers. We do not create followers. Christ’s life is a demand. We don’t want to be reminded of it.”

Similar message strikes me twice? That’s my message from God. And it’s my column.

So, let’s talk about Jesus.

I don’t think, in our culture, you’ll find a lot of people who openly regard Him negatively. Even the Doobie Brothers said that “Jesus is Just Alright.” (Which, in the parlance of the day, meant that He is “cool.”) It’s kind of a form of weak virtue signaling to speak highly — but vaguely — of Him. Of course, the “Jesus” to whom people frequently refer bears little if any resemblance to the actual Jesus who walked the earth — the one whose life and message are recorded in Scripture.  No, He is mild and pleasant and somewhat feminized, and He just wants everybody to get along.

I actually read a Facebook post the other day (I don’t remember the context) in which a woman was lecturing someone about how Jesus’ message was all about UNITY and EQUALITY. Apparently, she never got to the part about how a father will be divided against his sons, and a mother-in-law against her daughter-in-law.

We all see “outsiders” shape-shifting Jesus to fit their own agendas. But what about those of us who call ourselves Christian — followers of Christ? Where does Jesus fit into our lives?

I maintain that a vast majority of “Christians” probably fall more into the “admirer” category than the “follower.” We speak of Him, occasionally, but always in reverent tones. We put his picture in a corner of the house somewhere. Perhaps we even quote Him when his words bolster our argument.

But is that what He asks of us? Did He say “Join my church, and give me lip service every once in a while”? Did He say “As long as you’re a basically good person, you really don’t need to pay too much attention to me”?

No. He said “Follow me.” Actually, technically, it was “deny yourself, take up your Cross and follow me.” He invited us to lose our lives for His sake. He commanded us to love Him with our whole heart and soul.

What does it look like to follow Him? It looks like St. Teresa of Calcutta, who never worried about funding her ministries, but prayed for an hour every day and the funds arrived when they were needed. It looks like St. John Paul II, who risked his life pursuing the priesthood in an underground seminary in defiance of the Nazis. It looks like Bl. Franz Jagerstatter, who refused to swear allegiance to the murderous dictator Hitler, even when it led to his execution.

It also means you and I strive to put Him first in our everyday lives. It means we read his word and ponder what He is telling us through it. It means we work to live lives of service instead of merely comfort. It means we see his image and likeness in every person we encounter. It means we stand up for his truth in our own little ways, even when doing so will cost us popularity or business or “likes.”

But that can be unpleasant at best, and can cost us our lives at worst. Why do we have to go through it all? Are these just the hoops we are supposed to jump through so we can get to Heaven?

No. We bother not because He needs us, but because we need Him. We need Him at the center of our lives. We need him because, as Father Mike said in his talk, we are not “fine” without him. We are desperate, in need of a savior, to save us in this life and in the next.

Also, lest you think I am preaching at you from some high spiritual perch where I have attained this incredible one-ness with him, think again. I’m just the girl who heard a reminder twice in a week and had to take a good hard look at her own life.

Let’s all make a commitment to take Him out of the corner in 2020. Let’s put Him first. Let’s make sure his voice is the first one we seek in the morning, and that his word informs our every decision. Let’s ask Him to shine his love through us. Let’s recommit to his sacraments.

And then we can show the world who He really is.