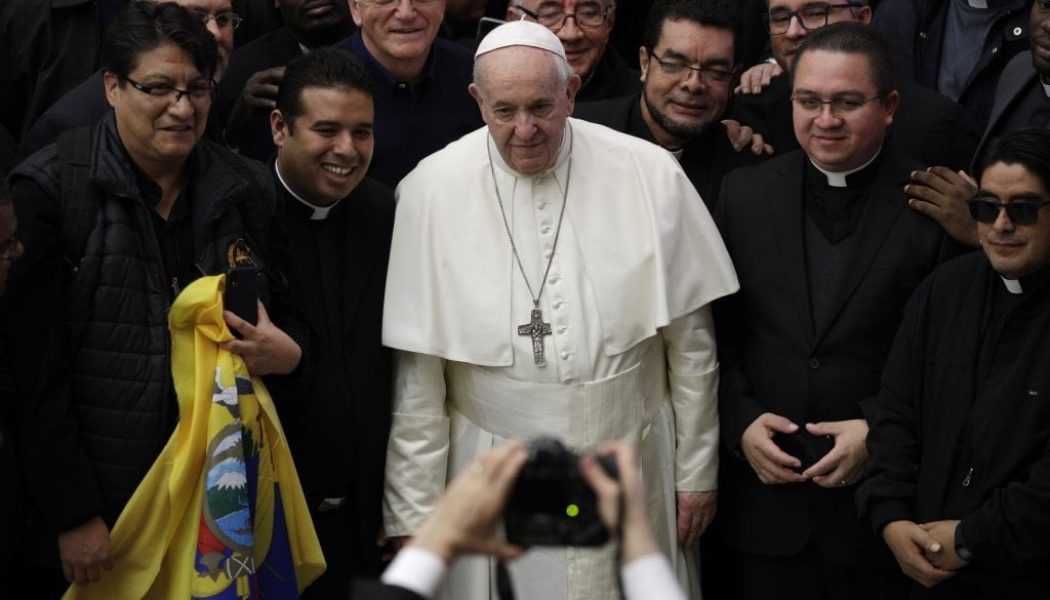 ROME – One of the great Lenten traditions in Rome is the daily trek for Mass to one of the station churches, meaning churches marking spots where early Christians would commemorate the martyrs and celebrate the Eucharist, and where popes used to make the rounds themselves during Lent.

For English-speakers, the 7:00 a.m. daily liturgy is organized by the Pontifical North American College, the residence for American seminarians studying in the Eternal City. One of the things that can’t help but strike a visitor is the strong turnout of clergy every morning; while the ratio of priests to lay faithful in the US and Europe overall is about 1-1,300, at the station churches it’s usually more like 1-2 or 1-3.

It’s a reminder of an inescapable truth about Rome: There may be a priest shortage in the rest of the world, but definitely not here.

Bishops who come to Rome from, say, the Amazon, or the Pacific Islands, or sub-Saharan Africa, or from other points of the compass where the priest-to-person ratio can soar as high as 1-10,000 or more, often can’t help fuming over the surfeit of clergy here.

During last October’s Synod of Bishops on the Amazon, Bishop Johnny Eduardo Reyes, apostolic vicar of Puerto Ayacucho, Venezuela, put it succinctly: “All these priests and religious that we see on TV… It cannot be that they’re all studying in Rome. The distribution of priests and religious is not good.”

The math is on Reyes’ side. Overall, almost three-quarters of the Catholics in the world are in the global south, yet more than two-thirds of the Church’s priests are in the global north. Purely in terms of understanding one’s market, that can’t help but seem a dubious allocation of personnel.

Yet bishops and religious superiors continue to send priests to Rome to study, to work in the Vatican, to teach in a pontifical university, to work at the headquarters of some Catholic institution, and for myriad other reasons. A few become lifers, while most put in a few years and then move on to something else.

Granted, there’s a strong case that some of those priests could be better utilized somewhere else. Nonetheless, experience over the years suggests there are at least three basic reasons why a bit of Roman seasoning often has a positive effect on priests, perhaps especially Americans.

First, it imparts global perspective. Rome is the crossroads of the Catholic world par excellence, where an average day might involve spending time with a talented lay academic from Slovakia, a visiting priest from Nigeria and a lay professional from Bolivia, all of whom have stories to tell about how the faith plays out back home.

It’s a rolling education in the realities of a global Church, which is especially valuable for Americans, for whom the lack of a strong sense of the universal church tends to be our Achille’s heel. Americans tend to assume our experiences are those of the world, our priorities are everyone else’s, and our solutions should work everywhere.

The demographic situation of the Church in the early 21st century is this: There are 1.3 billion Catholics in the world, and roughly 70 million in the U.S. That means American Catholics are just six percent of the global Church, and hence the price of a seat at the table is learning to think in a global key.

Second, spending some time in Rome is also an education in Italian flexibility.

The late Cardinal Francis George of Chicago was fond of saying that Americans may be ecclesiastically Catholic, but they remain culturally Protestant. He meant that the cultural foundations in America include a strong dose of Calvinist rigor, which can translate into American Catholics, including our clergy, coming off as fusspots, insisting on exacting obedience to even minor rules and protocols.

Legendarily, Italians are masters of adaptation. Not for nothing is one of the favorite phrases in Catholic life here se il papa fosse qui, ci capirebbe, meaning, “if the pope were here, he’d understand.”

They’re tolerant types who have concluded they can’t fine the entire human race. They don’t make judgments based on unbending rules. They discuss the motorist’s personal choices, displaying a flexibility unknown to police in other countries. Eavesdrop on one of their conversations. These are summary trials in miniature, with a prosecutor (the police officer), witnesses (another police officer, passersby) a defense lawyer (the wife), mitigating circumstances (“I live right across the street,” “I was just going to the pharmacy”) a summing up and pronouncement of sentence. This weird sort of justice on the hoof – unlike the formal version, which has nine million trials awaiting a verdict and sees eight in ten crimes go unpunished – seems to work.

The same patterns apply to Italian clergy, and exposure to them can help sand the rough edges off the American Calvinist impulse.

Third, spending some time in Rome also imparts at least a basic degree of Vatican literacy, which is helpful for American priests who have to go back home and explain to people what in God’s name is going on over here.

To the extent that the American media pays attention to the Catholic Church, it’s often focused on the pope and the Vatican. Whenever a bomb goes off here, it’s rank-and-file priests who are often pressed to make sense of it back home. Most American priests have had the experience of somebody coming up after Mass, or at dinner, or whatever, asking: “Father, I heard the pope said X. What does that mean?”

Hanging around the edges of the place for a while, getting a sense of its culture and psychology, is a big help when those moments roll around.

None of that may be enough to offset the raw reality that Catholicism’s priests aren’t where its people are, and the Eternal City undoubtedly could get by if a share of the clergy presently stationed here were shipped off someplace else.

Still, it does suggest that those priests who put in some time in Rome often come away better for the experience. St. John Paul II used to charge seminarians here to imparare Roma, meaning to “learn Rome,” and it remains a valuable lesson.

Their shared hosting offering is affordable if you go with longer term plans. Works seamlessly for sales pages, squeeze pages, videos, and much more. 7 trends you may have missed about real estate for sale maryland | real estate lead generation.