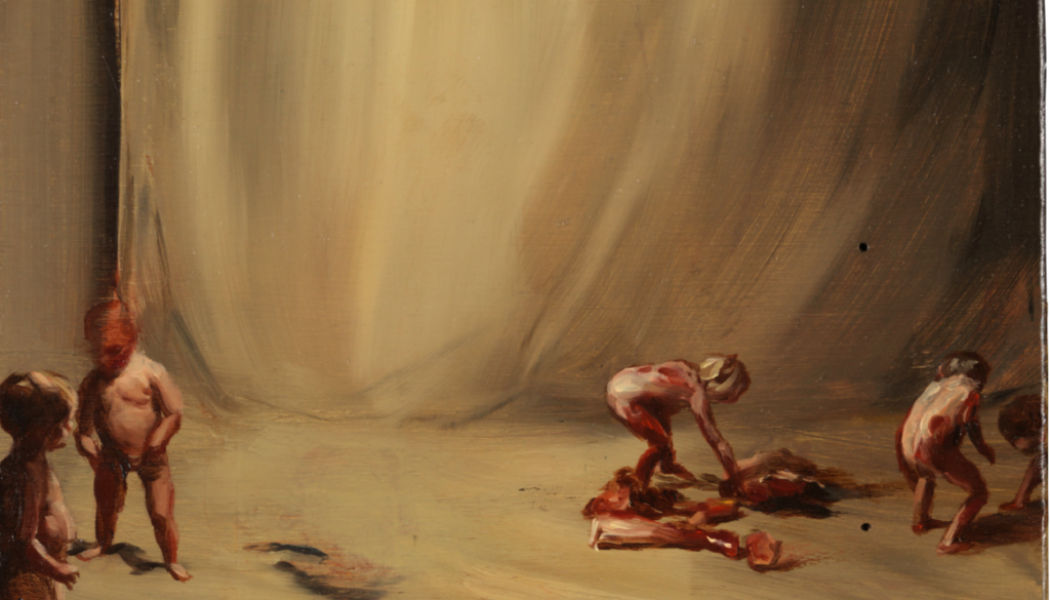 The scandal around the ad campaign for the high fashion house Balenciaga has turned up more disgusting images. Look:

If you go to the tweet and click on the photos, you’ll see that there are images from that Michael Borremans book, documenting an exhibition of his called “Fire From The Sun”. From a review of the Hong Kong exhibition:

The perceived meaning of the works is difficult to voice or uncomfortable to admit.

In the most evident terms, Fire From The Sun portrays children aged two or three in various stages of play with fire and what appear to be human limbs, even hair. The children are all light-skinned Sistine-style cherubs, sometimes covered in blood. The children do not appear to be distressed or disturbed (though some viewers at the gallery may be). The drama of the paintings is heightened by their visual connection to each other—and, more broadly, to older works by Borremans. The scene in each painting is composed against a similar beige backdrop. This is a set or a stage, devoid of context, withholding of answers, but suggestive of a director or someone watching.

In some of the paintings the children are in the process of disappearing: phantom bodies not quite removed from their gruesome acts. These ghostly figments remind us of the artist’s hand (another detached extremity) and its control over what we see and what we don’t. More poetically, the visible existence of “disappearance” suggests the impossibility of a clean escape from a bloody episode. Importantly, Borremans chose to depict children too young to have clear memories. In some fictional future, they might be unreliable carriers of this formative origin story or trauma. Are these portraits of what it means to try and erase the past, unsuccessfully?

… While the fire and (probable) cannibalism imply some sort of ritual, the works are most chilling as sketches of random violence, causal and instinctual. The depicted characters break with one typecast (angelic) while fitting another (demonic).

From the book featured in the Balenciaga shot:

Michaël Borremans’s new paintings depict toddlers engaged in playful but mysterious acts with sinister overtones and insinuations of violence. The children are presented alone or in groups against a studio-like backdrop that negates time and space, while underlining the theatrical atmosphere and artifice that exists throughout Borremans’s recent work.

“The scenes depicted by the majority of paintings comprising Fire from the Sun show a state of being or society in which the primal is uncontrolled, without bearings, in a state of anarchy,” Bracewell writes. “ historic Romanticism subjugate to mysterious controlling forces that are neither crudely malevolent nor necessarily benign.”

A state of being or society in which the primal is uncontrolled, without bearings, in a state of anarchy. There’s one canvas in the book (I saw this on the Amazon sample) showing naked toddlers smeared with blood, and eating raw meat, apparently a limb. Cannibalism and toddlers. Lord of the Flies.

What’s going on with Balenciaga in this campaign? They featured photos of little girls connected to sadomasochistic sex. And now this? What message are they sending? More from the Borremans book:

Look at this one from the book:

Damn, that is dark. In this story, the journalist who visits him in his studio says:

To me, the foolish, frightening figures in ‘Black Mould’ encapsulate today’s deep-seated fears about religious extremism and I can’t help noticing how frequently Borremans mentions faith. ‘I was raised Roman Catholic, but then I lost my belief,’ he tells me when I ask. ‘I still like the idea that people come together in a building to reminisce about life and death…But every religion that is institutionalised is bad. It should be like Buddhism: only in thoughts. Otherwise it’s about power, and then you miss the point.’

OK, it’s bizarre that this particular book by this particular artist would appear in the ad campaign. You should know that in this highly styled campaigns, nothing is left to chance. It’s possible the stylist — a different person from the photographer — randomly chose contemporary art books. Even if not, it’s possible to read too much into the titles on the desk. Still, the overwhelming spiritual darkness of the Borremans paintings does fit with the pitch-blackness of the Balenciaga campaign (for which it has apologized).

But look at this one, from the kid campaign:

Baal was the ancient Canaanite god, to whom children were sacrificed — usually the first-born child of the sacrificer, who would be incinerated alive. One of his titles was “Baal-zebub,” or Lord of the Flies.

Look at this drawing on the right side of that photo, on the wall:

Balenciaga knew exactly what it was doing here. It is simply not possible that one of the most sophisticated global high fashion brands was fooled.

As Tucker Carlson said last night, do you want to know why Jeffrey Epstein was still celebrated by the rich and famous, even after he was convicted of sex with minors? There’s probably a connection between that and what Balenciaga has done here. Among the super-rich, this stuff is normal.