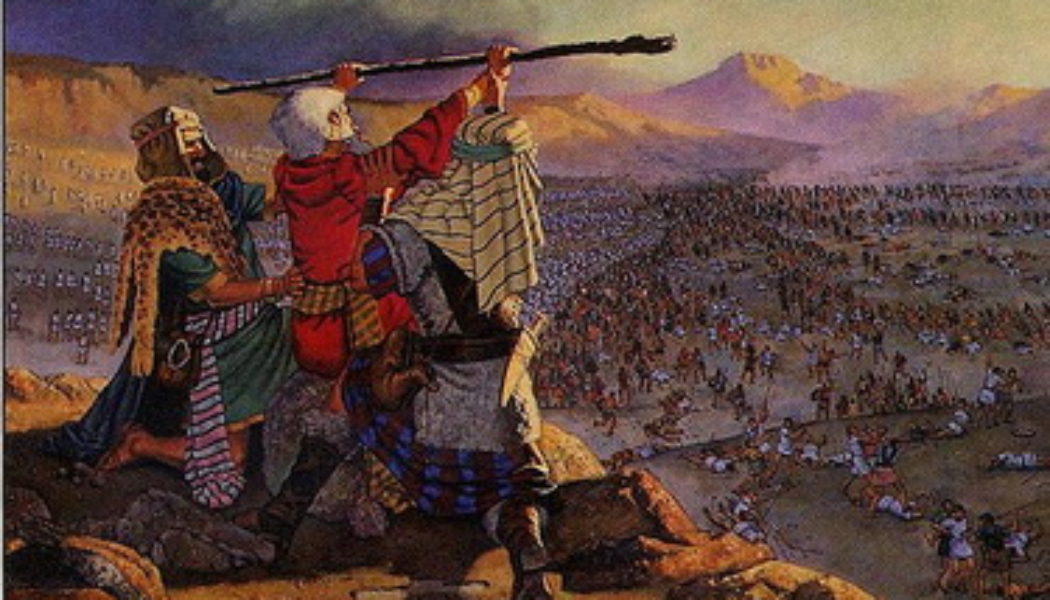 After God’s people, the descendants of Israel, crossed the Red Sea in the Exodus, an army of Amalekites came to battle them in the Sinai desert. So Moses instructed his servant Joshua: “Pick out certain men, and tomorrow go out and engage Amalek in battle. I will be standing on top of the hill with the staff of God in my hand.” The next day, while Joshua led Israel’s soldiers in fighting the foe on the battlefield, Moses stood upon an adjacent hill along with Aaron and Hur.

“As long as Moses kept his hands raised up, Israel had the better of the fight, but when he let his hands rest, Amalek had the better of the fight.” Moses wielding this staff at God’s command triggered the plagues in Egypt, parted the Red Sea, and now brought Israel’s victory on the battlefield. But this raises a reasonable question: why would God condition his people’s success in combat upon an old man holding a piece of wood above his head? Moses lifting up this staff of God was a sign for God’s people which preserved them from a spiritual disaster.

God knew that if Israel had won apart from this sign they would have ascribed the victory to themselves. “We won this battle because we’re so smart, and strong, and brave! Maybe we don’t need God’s help after all.” Such pride in their success could be their downfall, in this life and the next. So instead, through the sign of an up-lifted staff, the Lord showed Israel, “I am the vine, you are the branches. Whoever remains [with] me and I [with] him will bear much fruit, because apart from me you can do nothing.”

Similarly today, our Lord desires us to pray without ceasing for the good things we want or need. Otherwise, if and when his blessings come, we shall attribute these things to mere luck, coincidence, or to our own personal abilities, with no growth in our relationship with God. He is the source from whom all good things come. By asking and then receiving, we come to see and know the Lord is near and cares for us. And in the end, that is the most valuable gift of all.

God not only wants us to know and to love him, he desires us to glorify us as well. God is all-powerful, omnipotent, he could do everything without us. But by God accomplishing his will through us, as he did with Moses, the Lord makes us more like himself and causes us to share in his glory.

Holding the staff of God in his hands throughout the day made Moses’ hands and arms grow tired. (If you cannot understand why, try holding an object above your head for just ten minutes sometime.) When Moses’ body grew tired, his friends came to his aide. “They put a rock in place for him to sit on. … Aaron and Hur supported his hands, one on one side and one on the other, [one on his right and the other on his left,] so that his hands remained steady till sunset.” With this help from his friends, Moses kept his arms raised-up and God’s people prevailed against their foe. All of this was a foreshadowing of greater things to come.

On Good Friday, when Jesus was condemned to death, he took the cross into his hands and carried it to the top of a hill. There his hands were nailed to the wood above his head. And Jesus was not there alone. All four Gospels note he was crucified between two others, “one on his right and the other on his left.”

Our Lord was mocked as he hung for hours upon the Cross: “Are you not the Messiah? … If you are the King of the Jews, save yourself!” But in the Garden of Gethsemane, Jesus had said, “Do you think that I cannot call upon my Father and he will not provide me at this moment with more than twelve legions of angels? But then how would the Scriptures be fulfilled…?” Christ had the power to come down from the Cross, but if he had done that—if Jesus had released his hands from the wood—if he had refused to die for us, how would we have been saved from our enemies, sin and death?

Love kept Jesus on his Cross: love for his friends gathered nearby. love for the criminals on his right and left, and love for you and me. Consider what a precious consolation it was for Jesus in his suffering to have his Mother Mary, John the Beloved, and Mary Magdalene there supporting him. “But,” Jesus asks, “when the Son of Man comes [again], will he find faith on earth?” Will Jesus return to a world where everyone imagines they can get along just fine without him?

Let us continue being God’s humble people, recognizing our dependence on him. Let us ask of him our wants and needs
so that we can know and experience his blessings. Then we shall share his deeper friendship and share in his great works, increasing in his likeness and increasing in his glory. By relying on God and the holy friends and loved ones his providence places near to help us, we shall share in our Lord’s great victory.

This entry was posted on October 16, 2022 at 1:03 am and is filed under Homily, Exodus, Prayer, Jesus Christ, Sunday Homilies, Typology, Moses, Passion, Second Coming. You can follow any responses to this entry through the RSS 2.0 feed. You can leave a response, or trackback from your own site.