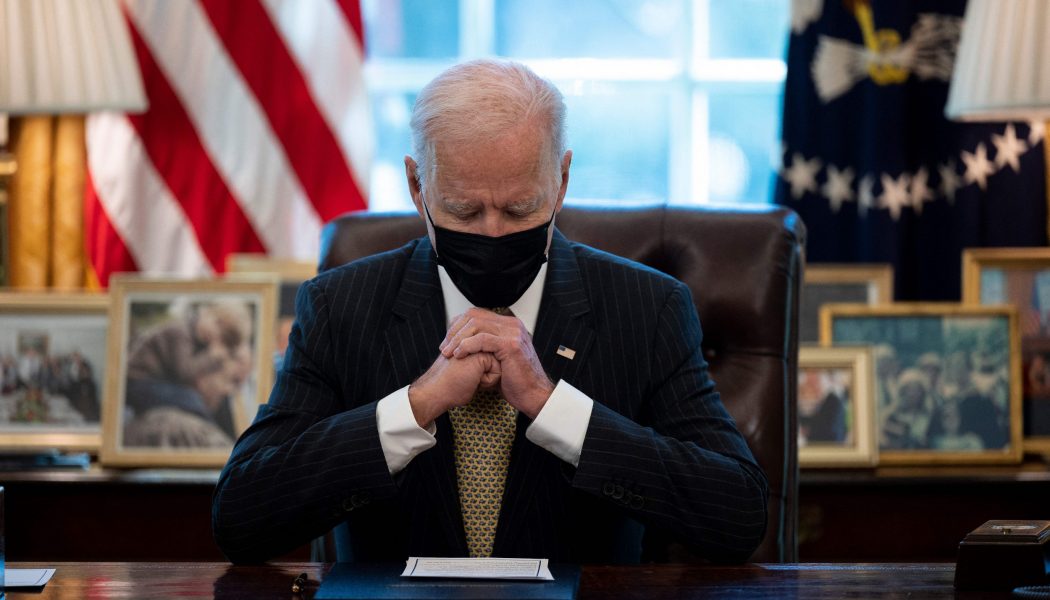 This is my third open letter in the pages of Newsweek, addressing you as a fellow American Catholic. The reason for these public overtures is self-evident: the United States has never before had a president who touts his religious credentials and bona fides, even as he backs one policy after another that subverts his church’s teachings. So long as this dissonance continues, it needs addressing—if only to clarify a few basics about what Catholicism teaches, and what it doesn’t.

We are not speaking here of issues about which citizens might reasonably disagree, like the fair distribution of taxes, the filibuster, the canceling of the Keystone pipeline and so on. We are focusing instead on the policies of your presidency that would, if taken to their logical conclusion, flagrantly contradict quintessential Church teachings. Your administration’s bare-knuckled promotion of abortion under any circumstances, as I mentioned in my first letter, is one example. The subject of letter two—your refusal to interfere with the mounting attacks upon, and silencing of, your fellow Catholics—is one more case in point.

To these now add another public traducing of the precepts of the Magisterium: your team’s rapturous support of the so-called Equality Act.

Mr. President, I’m not a theologian. And that is exactly the point. If the Equality Act’s anti-religious repercussions are so obvious that members of the laity can enumerate them, how much more brazen must they appear to the Catholic hierarchy? Anyone who has eyed the faith even casually can see that the Equality Act thumbs its nose at the Bible, which begins “male and female He created them,” and ends with ineradicably “gendered” visions in Revelations.

Let us count up a few of the ways in which the Equality Act defies bedrock principles of this Church of ours.

First, the act’s approach to abortion violates both the spirit and the letter of our religion. To aid and abet actions inimical to Church teaching is described in the Catechism as “scandal,” meaning “an attitude or behavior which leads another to do evil.” This is not some boutique preoccupation of the Holy See. Other religions, too, teach that it is wrong to encourage one’s fellows to err. Most secular people would presumably agree.

Your Church, along with others, teaches that abortion is gravely wrong. But by redefining the ending of unborn life as a “medical condition,” the Equality Act would greatly increase the ease with which abortions are obtained. If a Catholic president working purposefully to enable the snuffing out of unborn life is not “scandal,” or leading others astray, nothing is.

Then there is the act’s interference in the work of physicians and others. Church law, also known as canon law, instructs that, “All the Christian faithful have the right to be free from any kind of coercion in choosing a state of life.” Mr. President, the Equality Act menaces all faithful Christians engaged in health care. It threatens to force participation in acts their faith defines as sinful, including the permanent disfiguring of healthy organs. Such coercion impedes the vocations of others. It is one more inescapable example of what the Church calls “scandal.”

Third, as scholar Anne Hendershott has observed, under this act, “All religious schools will be forced [by future lawsuits] to hire those who do not share [their] teachings and beliefs” and “all Catholic institutions are at risk now—including Catholic hospitals”—because the bill deliberately excludes conscience protections. If the Equality Act becomes law, Catholic institutions will be forced to include within their ranks people who dissent from Church teaching—even people who hate the Church, and are committed to its destruction. To fellow Catholics, the message is clear: trample Genesis, or else.

Fourth, as another scholar, Fr. John Hollowell, has pointed out, your support of this act defies another longstanding teaching. In 1885, Pope Leo XIII established via the encyclical Immortale Dei that “It is unlawful to follow one line of conduct in private life and another in public.” As Fr. Hollowell further notes, Catholics are also forbidden to “imped[e] the freedom of ecclesial ministry.” Yet the Equality Act, he writes, will target “Catholic hospitals, Catholic nurses and doctors, Catholic schools, Catholic adoption agencies, and many Catholic ministry non-profits.” All of these institutions, and more, will be forced to knuckle under—or else pay civil and criminal penalties for their fidelity.

In closing, Mr. President, you have fondly credited Catholic education with guiding you through the shoals of life—specifically, your prep school, Archmere Academy in Delaware. That school’s mission statement professes dedication to five specific goods: “community, respect, zeal, reverence, and wisdom.”

The Equality Act would jeopardize every one of these goals. By tacitly identifying opponents as “haters” and “bigots”—an uncivil but already widespread practice—it would visit opprobrium on the entire American Catholic “community.” By transforming the Bible into a relic of prejudice, it would put “respect” for the Church and its teachings off limits. Because public religious conviction will carry an ever-higher cost, “zeal” would come to be preemptively suppressed—as would “reverence” in the public square. Nor will “wisdom” flourish, once anti-scientific prejudice, joined with covert and overt anti-Catholicism, become proscenia of the American future.

Mr. President, your political course impugns the teachings of your Church and the mission statement of your own alma mater. Please consider that if an agenda like yours had become law in the United States 60 years ago, the Archmere Academies among us might have been stifled out of existence by now.

Mary Eberstadt holds the Panula Chair at the Catholic Information Center and is a senior research fellow with the Faith and Reason Institute. Her work can be found at maryeberstadt.com

The views expressed in this article are the writer’s own.