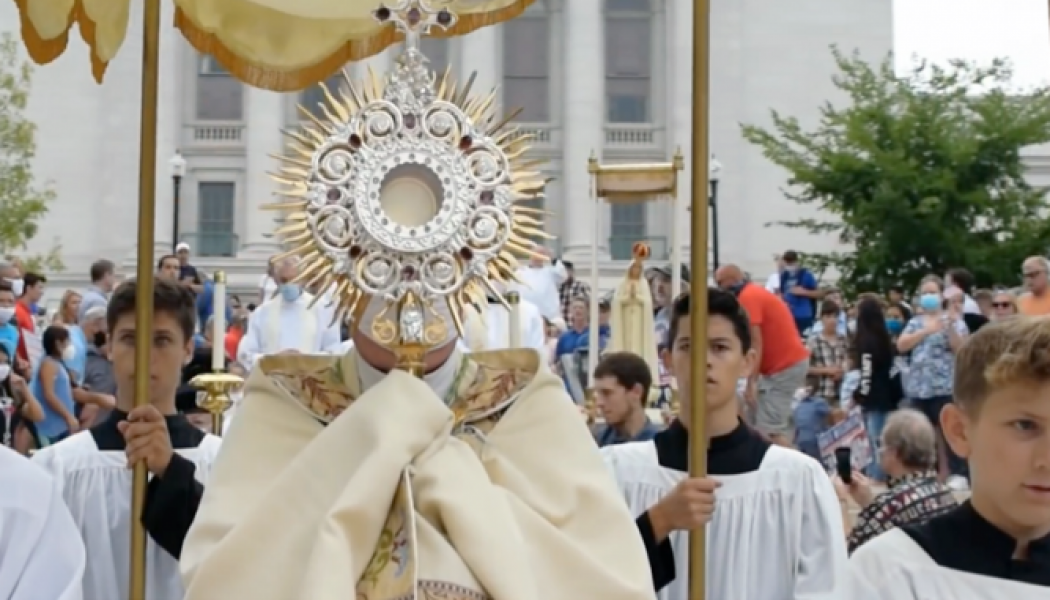 MADISON, Wisconsin — The success of the highly visible Eucharistic Procession and patriotic Rosary rally that drew 2,000 to 3,000 people to the Wisconsin Capitol Building on August 15 is spreading to more states with a new organization called “Unite Our Nation”.

In response to the societal angst caused by riots, the COVID-19 pandemic and a pervasive sense of evil in society, Bishop Donald J. Hying of the Diocese of Madison and Archbishop Jerome E. Listecki from the Archdiocese of Milwaukee led a huge Eucharistic procession up State Street to the Capitol, where a patriotic Rosary was said before Benediction of the Blessed Sacrament and a stirring homily by Hying. The event shut down traffic in a section of downtown and made a powerful statement about the primacy and kingship of Jesus Christ.

“We’re taking Our Lord into the streets, being the light in the darkness that we see everywhere,” said Kevin O’Brien, co-founder of Men of Christ, a Milwaukee-based apostolate that organized the procession. “You see not only the darkness of the riots, but the culture of anger that I see permeating everywhere. There is a blindness to truth, to goodness. So we’re calling down graces from Heaven to open up the minds and hearts of our people.”

Men of Christ just released a promotional video from the August 15 event and founded the new organization, “Unite Our Nation,” to bring Eucharistic Processions to more states. The group launched a web site that offers free planning resources, including videos, news releases, promotional letters and an event playbook, to organizers in other areas. Within the first 24 hours, O’Brien said he was contacted by people in five other states who plan to hold a Unite Our Nation procession and Rosary event.

“Michigan’s already doing it, Arkansas is doing it, North Carolina is coming, Texas is in the queue, Illinois is in the queue,” O’Brien told Catholic World Report. “These are people coming to us from all over. We want to get this out as fast as we can.”

Men of Christ posted videographers along Eucharistic Procession route, and had a drone flying overhead shooting additional footage. The video features short talks by Archbishop Listecki, Bishop Hying, Father Richard Heilman, O’Brien, and Catholic apologist Dave Durand. It captures the drama and reverence experienced by the more than 2,000 in attendance (Men of Christ’s crowd estimate was 3,000). The video spoke of drawing courage and taking Christ into the world to heal and bring more people to Him.

“Jesus summoned Simon Peter to step out of the boat and to walk on the water. We can’t do anything if we don’t take one step,” Bishop Hying said on the video. “To process the Eucharistic Christ through the streets of a city is to really call down the whole power of Jesus crucified and risen upon our people, upon our city.”

The procession traversed the upper section of State Street, the scene of riots and looting in late May and on June 23 and 24. It continued onto Capitol Square, where rioters had pulled down two historic statues and smashed windows before firebombing the nearby City-County Building. The boarded-up windows of restaurants and stores were a stark contrast to the gold monstrance and the Eucharistic Procession.

“In being courageous and in demonstrating the faith, you demonstrate your trust in God — and God will not abandon those who love Him,” Listecki said on the video, which closes with a final line from the archbishop: “Don’t be afraid. God is with us in all things.”

O’Brien said Unite Our Nation has the feeling of a real movement. He hopes it catches on. “Success leaves a trail. We want to model the success that we have and do it everywhere,” he said. “Picture 50 states doing it. Picture cities all over. Picture colleges that are now talking about doing it. I just got an email this morning. A local parish is going to do it and bring the Eucharist into the streets. Now this ripple effect of goodness, this tsunami of goodness has taken place because of one event, can then cascade to the United States and we can bring Christ everywhere.”

By including a patriotic Rosary, these events include a strong Marian focus, O’Brien said, “allowing Our Lady to exercise her full mediation as the spiritual mother of our people.” The Madison rally included multiple mentions and a standing ovation for Madison police, who have been subjected to vitriol from rioters and criticism from Madison’s mayor and members of the city council. O’Brien said giving thanks to law enforcement was an important part of the rally.

“You see 3,000 people, kneeling down in the streets, over the grass, all over the place,” he said. “We’re praying the Rosary, you’re seeing Benediction. You also see our police out there and you give them a standing ovation. You see their eyes well up in appreciation. You know you’re doing good.”

On the video, Fr. Heilman told the August 15 attendees that for decades, the devil “has been eating our lunch” because people stopped believing in the supernatural power of God. “We’re here to say, ‘We believe,’ ” he said. “God, you are stronger than the devil, and we’re bringing you to the streets.”

The Lord is my portion, saith my soul; therefore will I hope in him.
Lamentations 3:24
DailyVerses.net