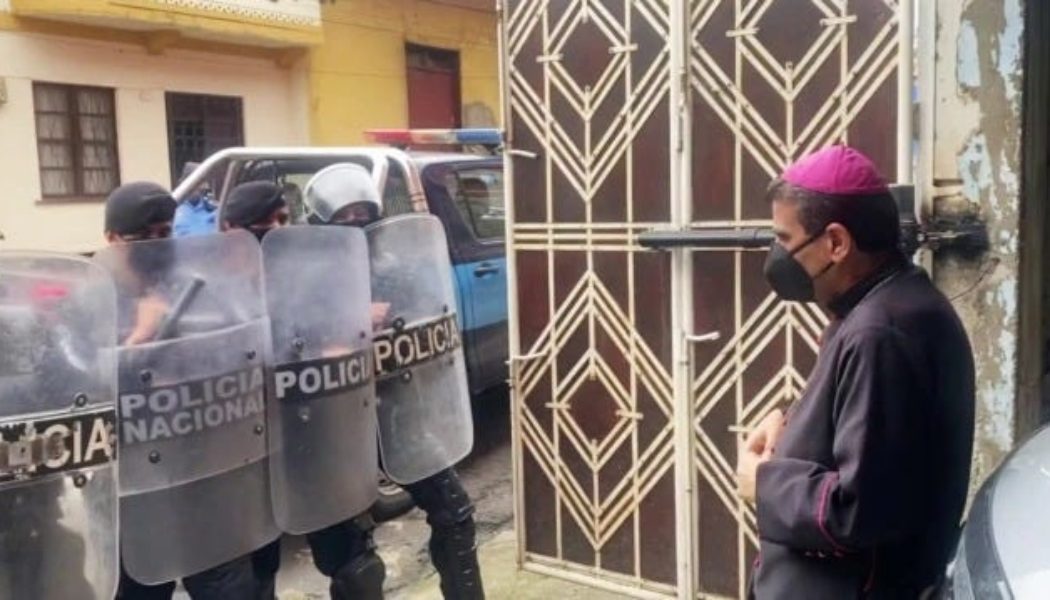 Editors’ note: This report was updated Aug. 19 at 1:11pm ET to include statements and details from Nicaragua’s National Police.

The Diocese of Matagalpa announced early Friday morning that the National Police of Nicaragua had raided the diocesan chancery, taking Bishop Rolando Álvarez and his companions into custody.

According to a police statement released Friday afternoon, the bishop was kept in custody in a Managua residence belonging to his family, while others are being processed at a detention center known as El Chipote. El Chipote is notorious among human rights advocates for inhumane treatment of suspected criminals.

According to witnesses, police and paramilitary officers entered the Matagalpa chancery building at around 3:00 am, taking the bishop and others in the house to an undisclosed location, in a caravan of eight police vehicles.

Álvarez, along with several priests and laity, had been detained inside the chancery building since Aug. 5, while the bishop was investigated by police for “inciting violence” in Nicaragua.

Witnesses on the scene Friday morning say it is not clear whether police displayed either an arrest or search warrant when they entered the building. Police said Friday the raid came after the Matagalpa diocese continued “destabilizing activities” even while the bishop was detained in his chancery.

“The people staying in the chancery were taken, respecting their rights, to the city of Managua, in order to continue legal investigations. The bishop is under ‘house custody’ in the capital city, and was able to meet with his family this morning,” a police statement said.

The statement added that Álvarez met Friday with family members and with Cardinal Leopoldo Brenes, Archbishop of Managua, adding that the prelates had a “wide-ranging conversation.”

During the two-week de facto house arrest in Matagalpa’s chancery, reports said the Ortega regime was negotiating the exile of Álvarez – instead of prosecuting him– with the country’s bishops’ conference, but Álvarez reportedly refused to leave Nicaragua.

While the others are in custody, Fr. Escoto, Matagalpa’s diocesan vicar general, remains in Matagalpa’s chancery, police said. While police have said Escoto has freedom to leave the building, witnesses in the city have claimed Friday afternoon that he remains under police guard.

The Pillar attempted to contact on Thursday one priest inside the house, but did not receive a response before the priest was taken into custody. Local journalist Wilfredo Molina told The Pillar he had been in contact with the same priest for the duration of the house arrest, but Molina said the priest stopped answering his messages yesterday.

The bishop’s de facto house arrest started amid a crackdown on Catholic Church officials by the regime of Nicaraguan President Daniel Ortega, in which several priests have been arrested, and Catholic radio stations across the country have been shut down.

Álvarez is an outspoken critic of the Ortega administration, and this summer his Matagalpa diocese became an epicenter for Catholic persecution by police, which culminated in an Aug. 5 announcement that the bishop would be investigated for inciting violence against the state, and detained on his diocesan property for the course of the investigation.

Álvarez has livestreamed a nightly rosary and a daily Mass nearly every day since his house arrest began.

But when the bishop did not appear on Tuesday’s rosary or Wednesday’s Mass this week, Nicaraguans speculated that he was sick, or had fled the chancery buidling.

And when everyone in the building received fragments of the same host during Thursday’s Mass, Nicaraguans expressed concern that those inside the house were running out of both Mass supplies and out of food. Others reported that police were not allowing medication to be delivered into the building.

But Álvarez reassured Nicaraguans when he appeared on Wednesday night’s rosary livestream.

“Good evening, beloved brothers once again you and I are united in the heart of Our Lady and his Son. I want to thank you for being on the lookout for us, for having asked yesterday and this noon for your servant.

Here we are, thanks to the Lord, with inner strength, with a serene spirit and a profound joy that only comes from faith and trust in the resurrected Christ,” he said before the rosary.

In the same transmission, two of Álvarez’s companions in the curia were absent: Henry Corvera, a musician, and Flavio Castro, a cameraman. On Tuesday, reports indicated that both had been allowed to leave the chancery and were detained in a Nicaraguan police station. Corvera was subsequently deported to his home country, El Salvador.

When Álvarez offered Mass Thursday morning, the livestream concluded after Father Ramiro Tijerino, one of his companions in the chancery, said a prayer before the Blessed Sacrament:

“It is hard for us Nicaraguans to sit down and talk with someone who thinks differently, who has a different ideology, a different religion. Help us Holy Spirit to find paths of understanding, paths of peace, paths harmony, so we can all find unity.”

Recent government clashes with the Church in Nicaragua began in 2018, when bishops, priests, and laypeople began openly accusing the Ortega regime of human right violations in the country.

Álvarez’s own standoff with the Ortega regime also started in 2018, when the bishop was a mediator in the negotiation between opposition politicians and the Ortega administration. Álvarez was eventually banned from negotiations, after he publicly criticzed the regime during the talks. More recently, the bishop declared in June he would fast until the police forces guaranteed his safety. The regime responded by closing the Catholic TV station he led as Head of Communications of the Nicaraguan Bishops’ Conference.

Shortly thereafter, the regime expelled the Missionaries of Charity from the country, imprisoned two priests under suspect allegations, and then closed 10 radio stations belonging to the Diocese of Matagalpa.

After Father Uriel Vallejos, of the Divine Mercy parish in the city of Sébaco refused to surrender the radio equipment to the police on August 1st, a 48-hour siege on his parish, where he, along with five laypeople did not have access to food and power was cut, Bishop Álvarez called for a Holy Hour and Mass at the local Cathedral on August 4th but he was not allowed to go to the Cathedral or leave the chancery since.

This is a developing story.