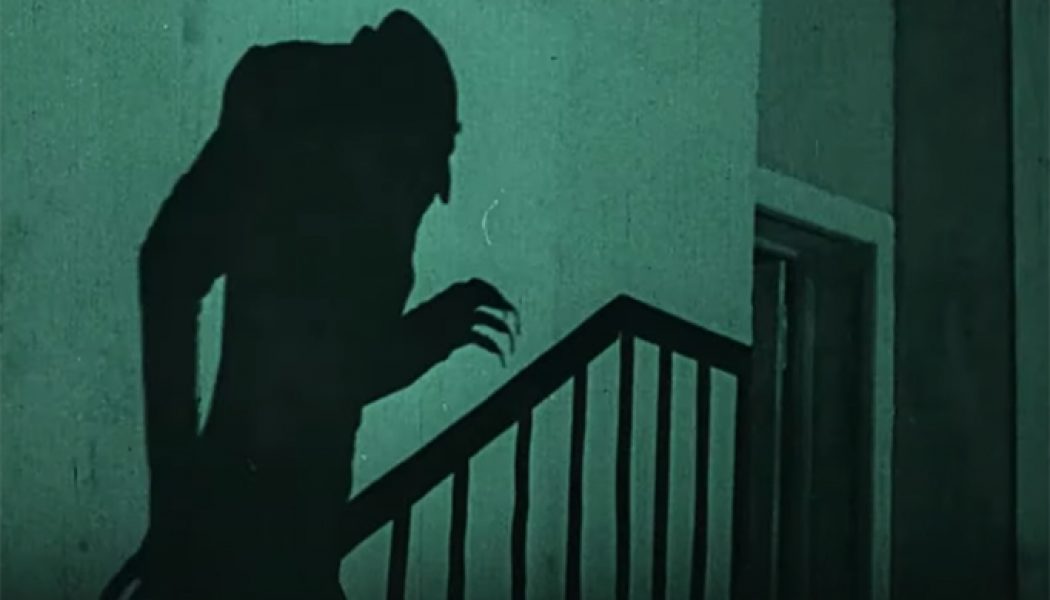 The depiction in Nosferatu of the upending of a settled way of life by contagion has more than a contemporary resonance.

At the center of the 1922 film Nosferatu: A Symphony of Horror are scenes of a plague, which has been visited upon a hitherto prosperous and relatively happy German community. The bringers of that plague are the rats that accompany the vampire Count Orlok from his lair in Transylvania. Soon, everyday life in the fictional town of Wisborg is transformed by a never-ending parade of coffin-bearers led by frock-coated and solemn-faced undertakers.

Today, a mysterious disease has visited us. Therefore, the depiction in Nosferatu of the upending of a settled way of life by contagion has more than a contemporary resonance.

Nosferatu: A Symphony of Horror is the earliest cinematic adaptation of Bram Stoker’s Dracula. The film appeared 25 years after the novel’s publication in 1897. Book and film, however, emerge from different worlds. Nevertheless, in both, good appears to triumph. Whilst this might be expected in an, albeit late, Victorian novel the same could not be said of the film born in the aftermath of the Great War.

After that war, the German Weimar Republic came into being. It was an entity as volatile politically as it was economically unstable. Defeat clung like a shroud to the nation’s consciousness. Nevertheless, the country’s nascent film industry flourished — so much so that, for the next decade, its films were to rival those of Hollywood.

Germany’s leading studio was the Berlin-based Universum-Film AG (UFA). It was to be from there that both surreal and realistic tales of love and betrayal, of war and peace, of obsession and desire, were to emerge. Noteworthy too was the frequent theme of the occult in the nation’s cinematic output. It was a subject matter that was to be at the forefront of some of the most important films then being made. From this artistic twilight, Nosferatu emerged.

The film was first conceived, and then created by two men: Albin Grau, its producer, and F.W. Murnau, its director. For the screen, Stoker’s novel is condensed and reshaped into something much more immediate and menacing. There is little of the novel’s Victorian optimism in the film version. There is, instead, the decay and despair engendered by the horrors of a war only just concluded. What could be overlooked, however, is how much the equally horrific Spanish Flu had dominated the lives and the imaginations of those who had lived through it, and of the filmmakers embarking on Nosferatu.

The Spanish Flu was an unusually deadly influenza pandemic. Lasting from January 1918 to December 1920, it infected 500 million people – about a quarter of the world’s population at the time. The death toll is estimated to have been anywhere from 17 million to 50 million people. To maintain morale while the Great War was being fought, German military censors had minimized early reports of illness and the ensuing German mortality rate caused by the flu. Some historians have argued that the spread of the virus tipped the balance of power in the latter days of the war toward the Allied cause, as both the morbidity and mortality rates were higher in Germany and Austria than in Britain or France. By the pandemic’s end, it is estimated that 426,574 Germans had died from the flu.

The Spanish Flu had barely receded when the filming of Nosferatu began in 1921.

In Nosferatu, the inter-titles — that is, the speech and narrative descriptions inserted into the running of a silent film — speak explicitly of the one thing that will defeat the evil pestilence brought to Germany in the form of the vampire Undead, and all that it represents. It is this: only a woman with a pure heart will stem, and indeed turn back, the contagion raging.

The central female character in Nosferatu, Ellen, is a woman of pure heart and the one to whom the challenge of confronting the scourge of the Undead that brings such untold evils into the lives of the inhabitants of Wisborg falls. The confrontation between Ellen and Orlok takes place just before the dawn. Eventually, it is this coming of the light into a darkened world that will ultimately destroy the vampire Orlok and the grip he exercises over those around him. Ellen is the conduit of that light’s power but also a willing sacrificial victim needed to lure the vampire toward it. In the scene when Ellen realizes what she must do to save the town from Orlok and his plague there is a crucifix clearly displayed in the background. Yet, there is something else besides. Prominently draped around the crucifix is what appears to be a set of rosary beads. Given the northern German, and distinctly Protestant, setting of the film, this is indeed surprising.

Just four years before the making of the film a series of apparitions had occurred in the Portuguese village of Fatima. It was there that three peasant children had caused consternation by their claims and later by what they talked of, namely, the triumph of the Immaculate Heart. In the 1917 apparitions at Fatima, the Rosary was central to the message given, one that spoke of the ultimate triumph of the Woman with an Immaculate Heart. In light of this, could the beads in these final images of Nosferatu be more than just a coincidence?

The makers of Nosferatu, Grau and Murnau, had decided to create a film based on the novel Dracula without seeking the approval of the Stoker estate. This lack of permission from the Stoker Estate came back to haunt the filmmakers almost immediately after the film was released. Stoker was dead but his widow Florence was very much alive. She sued the producers and, in so doing, won a court injunction for the destruction of all copies of the film due to copyright infringement. In fact, she was to pursue this injunction with a vengeance throughout the 1920s. Indeed, in 1928, the only copy exhibited in London was seized by authorities and burned. The film survives today only on account of a few copies that evaded destruction and which were later restored.

Perhaps, it is of significance that in 1904 Florence Stoker converted to the Catholic faith. Subsequently, she was to live close by and worship at London’s Brompton Oratory, a church dedicated to the Immaculate Heart of Mary.