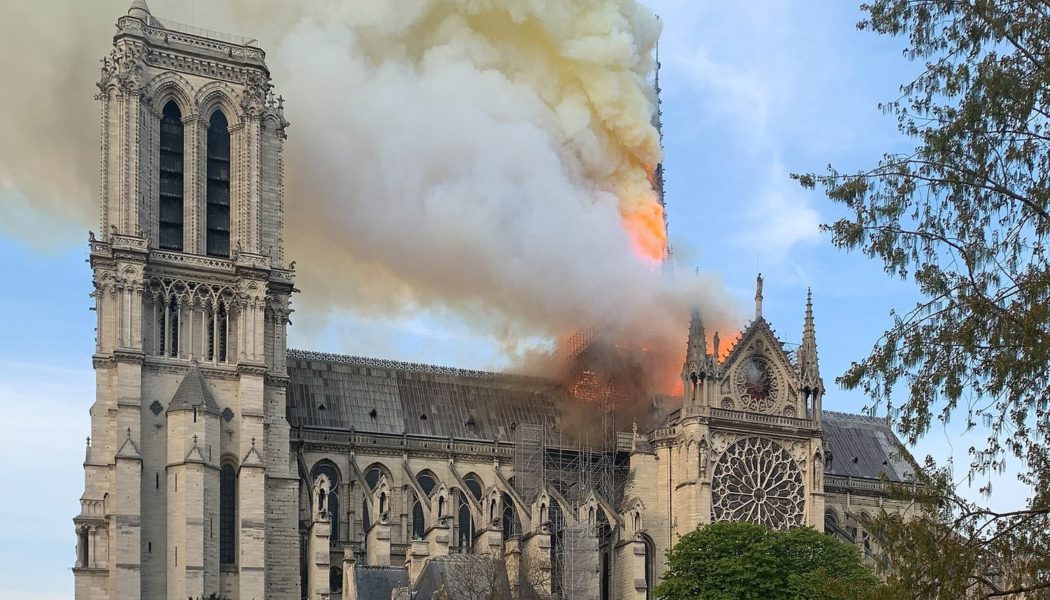 Before the pandemic dominated the news cycle starting in 2020 (and continues to do so), the fire that ravaged Notre Dame in Paris in 2019 was among that year’s biggest stories.

Over the Thanksgiving weekend, the famed cathedral was once again catapulted into the news cycle — despite it being a busy few days thanks largely to the Omicron coronavirus variant — after The Telegraph, based in London, reported a scoop under the headline “Notre Dame interior faces ‘woke’ Disney revamp.”

What followed was an amazing lack of mainstream news coverage.

Here’s how the Telegraph story (behind a paywall) opened. The following is a meaty excerpt since so many of you do not have a subscription to the British newspaper:

Critics have warned that the world-famous cathedral will be turned into an “experimental showroom” under plans to dramatically change the inside of the medieval building.

Under the proposed changes, confessional boxes, altars and classical sculptures will be replaced with modern art murals, and new sound and light effects to create “emotional spaces”.

There will be themed chapels on a “discovery trail”, with an emphasis on Africa and Asia, while quotes from the Bible will be projected onto chapel walls in various languages, including Mandarin.

The final chapel on the trail will have a strong environmental emphasis.

“It’s as if Disney were entering Notre-Dame,” said Maurice Culot, a prize-winning Paris-based architect, urbanist, theorist and critic who has seen the plans.

“What they are proposing to do to Notre-Dame would never be done to Westminster Abbey or Saint Peter’s in Rome. It’s a kind of theme park and very childish and trivial given the grandeur of the place,” he told The Telegraph.

A senior source close to the renovation said the plans risked turning the global beacon of Christianity into an “experimental showroom” that would “mutilate” the work of Viollet-le-Duc, the celebrated architect who restored the cathedral following the ravishes of the French Revolution in an effort to recapture the spirit of Medieval Christianity.

“Can you imagine the administration of the Holy See allowing something like this in the Sistine Chapel?,” said the senior source with access to the latest plans. “It would be unimaginable. We are not in an empty space here.”

I have been following this story closely ever since the fire — later deemed an accident — engulfed the Gothic-style cathedral. I have also watched news coverage of the fire, its aftermath and the rebuilding process. For example, The New York Times covered the fire as if it had occurred in a museum rather than a house of worship. CNN made a big fuss over wealthy French companies donating to rebuild the cathedral.

Meanwhile, the op-ed pieces that followed were also strange. The winner in this category: Rolling Stone on how Notre Dame should be rebuilt.

It’s those wacky designs — detailed here in a Religion Unplugged article I wrote back in July 2019 from the French capitol — had many worried at the time. While the outside seems to have been spared the worst of modern architecture, The Telegraph makes it clear that the inside won’t be.

Like I said earlier, the media coverage, or lack thereof from elite newsrooms in our news ecosystem, that followed this story is also of interest. Aggregation, which news sites partake in every day, was lacking on this story. In fact, it was picked up largely by news sites on the political right for its outrage. On the left, there were crickets.

The bottom line: It’s as if we have entered a new phase in the lifespan of American journalism. No longer beholden to objectivity, news organizations are more interested in managing the news than they are reporting it.

What does this mean? It means you can’t just read one source for your news — but you already knew that I this point — and need to supplant your daily diet of web-based information with an array of sources that span the political spectrum. If not, you will miss major stories and/or angles and reactions to such stories.

The Notre Dame renovations plans put forth just a few days ago are a prime example of this growing phenomena in the U.S. press.

Rod Dreher, at his widely-read blog at the American Conservative, was one of the first to comment on the story. (Dreher and I, for full disclosure, were once colleagues at the New York Post.)

I hope you will go to the Telegraph and read the entire package, if you can (it’s paywalled). Tim Stanley, Henry Samuel, and their sources are sounding a global alarm here: if they aren’t stopped, the wreckovators within the Catholic hierarchy in the Archdiocese of Paris are about to mutilate one of the most precious relics of Western Christianity. Tell everybody you know — and go to Twitter to let Archbishop Michel Aupetit know that he should keep hands off of Notre-Dame de Paris, a treasure that belongs first to the people of France, and then to the world. Keep in mind that after the Revolution, the state owns the churches of France, so the final word on wreckovation lies with the State. Nevertheless, the archbishop is down with this modernizing plan. These churchmen cannot be allowed to get away with it!

Only two other U.S.-based news sites tackled the outrage that the proposed interior would generate among many Catholics and Christians in general. They were the Washington Examiner and Fox News. Yes, both are conservative news sites.

It’s quite telling that no news organizations that lean politically left saw any problems or issues with the leaked renovation plans to even generate a story. In other words, editors saw zero potential for debates or controversy among Catholics or other cathedral lovers.

Here’s how the Washington Examiner opened their coverage:

The damaged Notre Dame Cathedral is getting a modernized interior update that has drawn criticism from traditionalists.

Newly released plans for reconstruction of the Notre Dame Cathedral will incorporate what some describe as a “politically correct Disneyland,” reports the Telegraph . Christophe Rousselot, the director-general of the Notre Dame Foundation, says the intent is to make the cathedral and Christianity accessible for those not raised in a Christian society.

“Foreign visitors see signs and magnificent paintings but don’t understand a thing,” Rousselot said. “Images and sculptures and paintings count, but so do words. So, there are plans to project on certain words and expressions in Mandarin, French, or Spanish and English.”

The “criticism from traditionalists” is clearly not important enough for The New York Times, Washington Post or CNN to do their own write ups. Especially given that the original Telegraph story is behind a paywall — meaning many will not be able to read it — doing a “reaction piece” is something many newsrooms do every day on stories.

Instead, over at Fox News, this is how they opened their news story:

Critics are bashing the rebuild of the Notre Dame Cathedral in Paris, accusing renovators of turning the 850-year-old church into a “woke theme park.”

Under the new plans to rebuild the fire-ravaged church, confessional boxes, altars and several classical sculptures will be replaced by art murals, sound and lighting effects, and room for “emotional spaces,” according to the Telegraph.

Visitors will also be able to travel along a “discovery trail” that beams scripture onto the walls in a variety of languages, including Mandarin Chinese.

One of the sanctuaries in the new church will reportedly be dedicated to the environment.

The fallout from The Telegraph story is already happening — right out in the open. Agence France-Presse, the French-based wire service used by many news organizations around the world, published a story this past Monday that made it sound like none of these radical redesigns was a done deal.

Plans to replace the gothic ambience of Notre Dame cathedral with a softer vibe of modern art and warm lighting have raised a few eyebrows, but the priest in charge denies any radical transformation is afoot.

With the cathedral set to reopen in 2024 — five years after a fire devastated much of its roof and spire — church authorities are putting forward new plans on December 9 for how the public will experience the iconic Parisian landmark.

They include Bible quotes to be projected in multiple languages on the walls and new art installations in place of its little-used 19th century confessionals, said Father Gilles Drouin, who is charged with reworking the interior, in an interview with AFP.

Gone would be the traditional straw chairs, to be replaced by more comfortable benches with their own little lamps to brighten the gloom — perhaps even able to disappear into the floor when not in use to leave more room for tourists.

Rather than lighting cast down from its cavernous ceiling, there will be “softer lights at head height” to give a more intimate feel to the 2,400 masses and 150 concerts held annually.

The National Heritage and Architecture Commission will hear the detailed plans next week, but already some conservative hackles have been raised.

The French government has said it wants to complete renovation on the damaged cathedral in time for the 2024 Summer Olympics, which will take place in Paris. The challenge between now and then won’t be just the condensed timeline to get thing done, but also the mounting fight that will take place over what the interior should look like.

It’s a fight, however, that many won’t know about if legacy media companies ignore it. Indeed, the lack of media coverage on this over the last few days says a lot about what mainstream newsrooms deem as worth of outrage.

FIRST IMAGE: Photo of the Notre Dame fire via Wikipedia