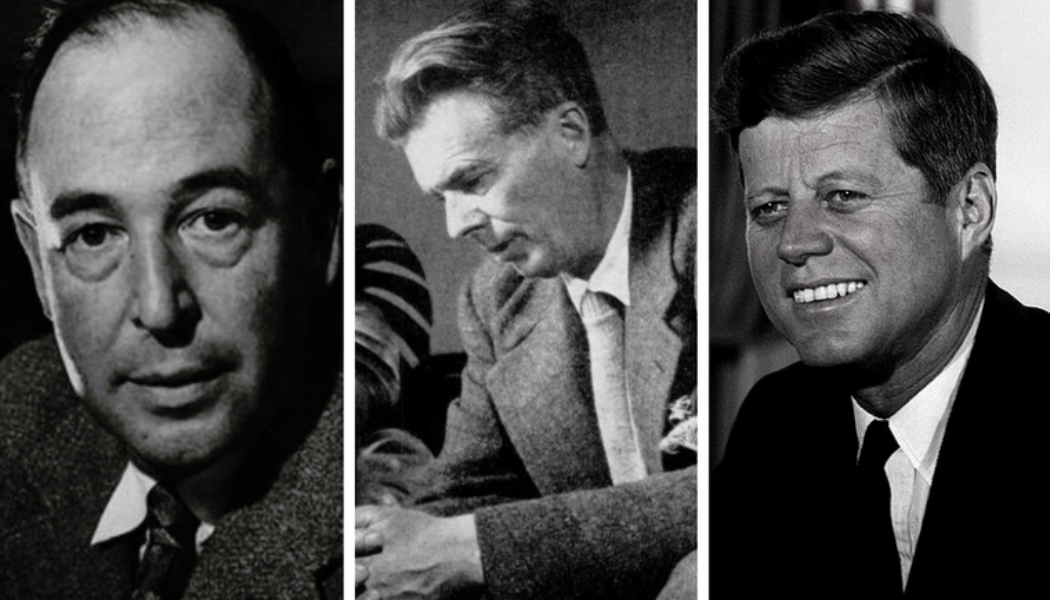 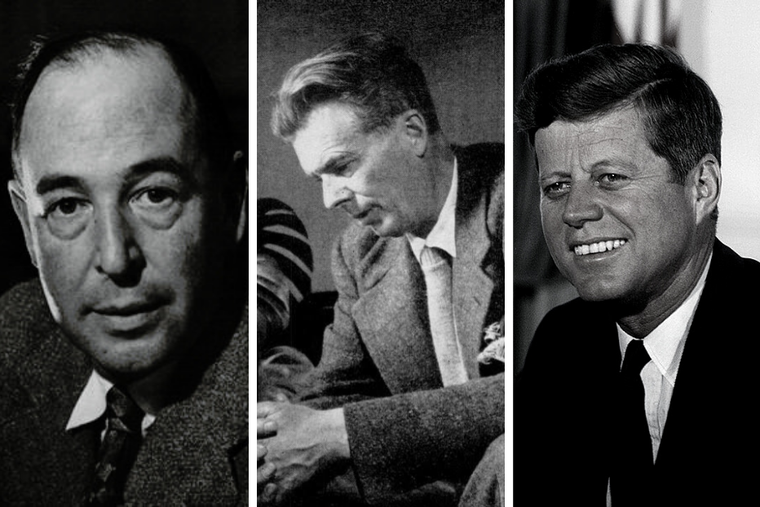 On Nov. 22, 1963, three award-winning writers died: one in Dallas, one in Los Angeles and the other at his home just outside Oxford, England.

John F. Kennedy, Aldous Huxley and C.S. Lewis all died within hours of each other.

All had been award-winning writers. However, when they died, they had become more than that, and, subsequent to Nov. 22, 1963, their lives gained even greater significance.

At 5:20pm local time at his home, The Kilns, just outside the university city of Oxford, C.S. Lewis collapsed in his bedroom. He had been ill for a number of months with nephritis. On the wall of his bedroom where he lay dead was a portrait of the face of Our Lord as depicted in negative on the Turin Shroud.

Born in Ireland in 1898, Lewis was baptized into the Anglican Church of Ireland and was educated subsequently in England. It was there, he later related, that he had lost his Christian faith. After fighting and being wounded in World War I, he was elected fellow of Magdalen College, Oxford, lecturing in medieval and Renaissance literature. He returned to his childhood faith in 1930, describing himself as “a most reluctant convert.” He was, however, to prove an effective apologist for his refound faith. Through his fiction and nonfiction, talks and radio appearances, Lewis was to become one of the major Christian figures in the English-speaking world.

On that Nov. 22, John F. Kennedy died some 55 minutes after Lewis. The then-president of the United States, while campaigning for much-prized reelection, was gunned down while being driven through the late-autumn sunshine of a Dallas afternoon.

Born Catholic in 1917 into an Irish-American family, Kennedy’s life was one of wealth and privilege.  After his service in the U.S. Navy in World War II, his political career began in earnest: congressman, senator and then the 35th president of the United States. At his Democratic National Convention acceptance speech, he talked of a “New Frontier.” His presidency seemed to symbolize a break with the past and an embrace of a more hopeful future.

Aldous Huxley was the last of the three men to die that day. Just as news reports were coming in of the death of the president of the United States, Huxley lay dying. His death is perhaps the strangest of the three. Suffering from laryngeal cancer, unable to speak because of the disease consuming his throat, he wrote on a tablet, asking his wife, Laura, to inject him with 100 micrograms of LSD intramuscularly. She did so. He died shortly afterwards.

Huxley was a celebrated English writer and philosopher, perhaps best known today as author of the sci-fi dystopian classic Brave New World (1932). Born into the British establishment, he was to make his life in the U.S., moving to California, mainly because of its climate. There, he also found work in the ever-expanding film industry based in Hollywood.

All three men who died on Nov. 22, 1963, were intellectuals; all thought deeply about the world around them. However, they were to seek answers to pressing existential questions in different places.

On Sept. 12, 1962, at Rice University in Houston, President Kennedy delivered a speech that continues to resonate to this day. In his “Moon Speech,” he proposed that the United States set the goal of putting a man on the moon by the end of the decade. Spurred on by the then-Soviet successes in the Cold War-driven “Space Race,” the president was deliberately setting out an even more ambitious program for NASA than the Soviets had yet planned for. Kennedy’s presidency was shaped by this idea of a New Frontier. Space was to signify the greatest frontier possible, its encounter with the last adventure for mankind, something full of possibilities, one still full of hope:

“I am delighted that this university is playing a part in putting a man on the moon as part of a great national effort of the United States of America.

“Many years ago the great British explorer George Mallory, who was to die on Mount Everest, was asked why did he want to climb it. He said, ‘Because it is there.’

“Well, space is there, and we’re going to climb it; and the moon and the planets are there, and new hopes for knowledge and peace are there. And, therefore, as we set sail, we ask God’s blessing on the most hazardous and dangerous and greatest adventure on which man has ever embarked.”

In the 1950s, while in California, Huxley started dabbling with mind-altering drugs. Soon, he became an evangelist for psychedelics, seeing them as a means to mystical states. Based on these experiences, his book The Doors of Perception (1954) appeared.

Writing there, however, Huxley came to this depressing conclusion: “We live together, we act on, and react to, one another; but always and in all circumstances we are by ourselves. The martyrs go hand in hand into the arena; they are crucified alone. Embraced, the lovers desperately try to fuse their insulated ecstasies into a single self-transcendence; in vain. By its very nature every embodied spirit is doomed to suffer and enjoy in solitude. … From family to nation, every human group is a society of island universes.”

One suspects that Huxley would have rejected Kennedy’s optimistic voyage to the stars, preferring instead a journey inward. All his life Huxley had been a searcher, restless to find a meaning to life. Long since rejecting the nominal Christianity of his family, he sought answers in Eastern philosophies, with an ever-deeper exploration of his own mind, augmented with drug experimentation.

In contrast, Lewis believed he had found the answer to life in 1930. He rediscovered the Christian faith of his childhood. So convinced of this faith was he that, from then on, he became one of the 20th century’s most effective and gifted Christian apologists. Outwardly, for most of his life, Lewis lived with the timetabled regularity of a university professor; however, inwardly, there was an adventure taking place as ambitious as a space program and one yielding more perceptive insights than those offered by any drug.

With regard to space travel, then a current and fashionable subject of writing and discussion, Lewis was under no illusion that such journeys into space would still be made by human beings wounded by original sin. Shortly before his death, Lewis gave an interview to Decision Magazine, where he talked of the human exploration of the universe. He said: “I look forward with horror to contact with the other inhabited planets, if there are such. We would only transport to them all of our sin and our acquisitiveness, and establish a new colonialism. I can’t bear to think of it. But if we on earth were to get right with God, of course, all would be changed. Once we find ourselves spiritually awakened, we can go to outer space and take the good things with us. That is quite a different matter.”

Kennedy had striven for the stars, but was never to know what the program he had set in motion achieved. The subsequent sound of a high-velocity rifle on a Dallas street was to put an end to his life and the hopes of a generation. But the United States would make it to the moon by the end of the decade just as its, by then slain, president had foretold. In June 1969, however, as footage came through of the moon landing, it was clear that the achievement solved nothing of humanity’s collective problems here on Earth.

All his life, Huxley strove for a mystical state, only to end his life in the confused haze of LSD. A few years later, though, the counterculture of the 1960s was to embrace much of his thinking on drugs as a gateway to a pseudo-mysticism. If Huxley had lived a few more years he would have seen that his ideas were celebrated and lived by many. This was especially so with the popular rock band The Doors, named after his 1954 book. That band’s music was to prove as drug-influenced and nihilistic as the man who inspired them. The counterculture of the 1960s sought its own “new frontier” in consciousness, both individual and collective, and yet this ended in the depressing predictability of death and despair of many who followed its path, not least of the lead singer of The Doors, Jim Morrison who died of a drug overdose in 1971.

By 1963, C.S. Lewis had for 33 years tried to live faithfully the life of a Christian. During that time, in an increasingly secular British society, his life had been far from easy, marked by suffering of various hues. Perhaps for a Christian that is just as well, for we are not called to a life free of suffering or to a form of escapism, to other worlds whether they be in the skies above or in our minds here below. Instead, we are asked to pick up our cross and carry it. Before his death, Lewis had long since embraced the cross. And he carried it until the evening of Nov. 22, 1963, when, with a picture of the face of his Crucified Lord gazing down upon him, C.S. Lewis died quietly in his bedroom.