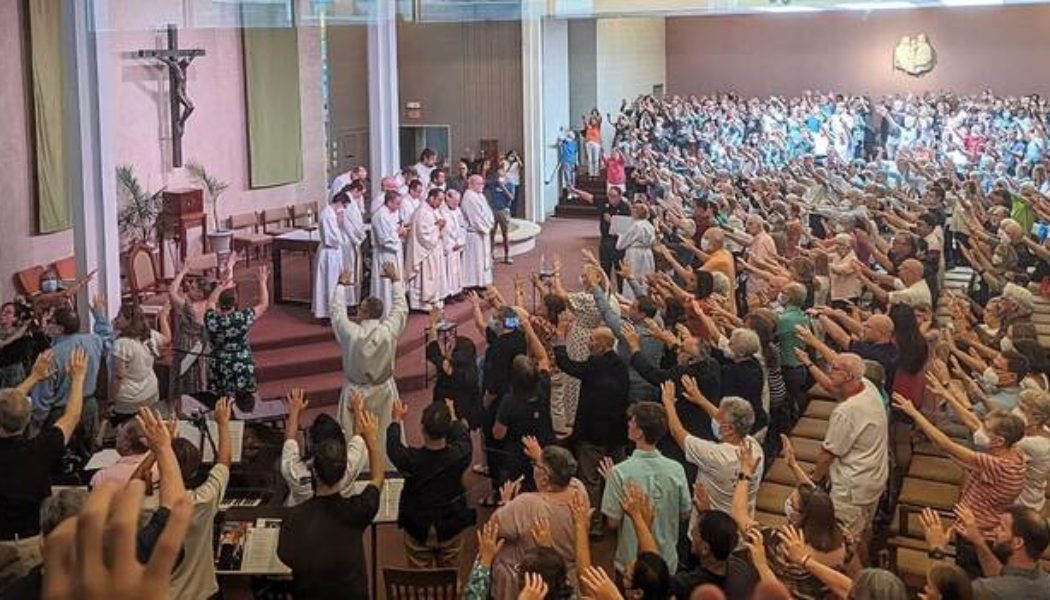 Ben Bohman attended a student activities fair his freshman year at The Ohio State University, and he left with two goals: to learn to play the ukulele and to start reading the Bible with regularity. By the time he graduated, last year, he had not mastered the musical instrument—but he was still reflecting on the Gospels. And he credits that habit, in part, to the group of Paulist priests who staffed the Newman Center at the Columbus, Ohio, university during his time there as a student.

“My personal spiritual needs were well taken care of,” Mr. Bohman recalled in a recent interview.

Worshiping at the Newman Center was something of a family tradition for Mr. Bohman. His parents had attended when they were students, and a Paulist father who was a campus minister then was still on staff when he arrived as a student in 2017. After graduating, Mr. Bohman stayed in the area and continued to attend Mass at the Newman Center. The worship, faith formation and service opportunities had been plentiful when Mr. Bohman was a student, and today, as a member of the resident community, he still participates, now in the young professionals group that caters mostly to recent graduates.

The anger and disappointment expressed by some in the Ohio State Catholic community points to challenging questions about the role of campus ministry centers.

With such a vibrant community at the Newman Center, Mr. Bohman, who is a nurse at Ohio State University Hospital, was surprised to read in an email earlier this summer that the Paulists would be leaving campus in August, after more than six decades ministering to Catholics in central Ohio.

On June 30, Bishop Earl K. Fernandes, who was installed as the bishop of Columbus just a month earlier, announced that the Paulists would no longer serve the roughly 15,000 Catholics who are affiliated with Ohio State. Instead, the Rev. Adam Streitenberger, a diocesan priest who had been the diocesan director of evangelization, would assume the responsibility beginning July 12.

“This is the first step in an exciting and renewed vision for vocations and evangelization within the Diocese of Columbus, in which the St. Thomas More Newman Center will play a vital role,” Bishop Fernandes said in the statement. (The Diocese of Columbus did not respond to requests for comment.)

On July 31, members of the Paulists, a religious order of priests founded in New York in 1858, celebrated Mass at the Newman Center, bringing to a close more than six decades of campus ministry at the Ohio State University.

On July 31, members of the Paulists celebrated their last Mass at the Newman Center.

In addition to the speed with which the decision was made, just weeks after the installation of Bishop Fernandes, two issues seem to have rankled longtime community members. First, the memo stresses repeatedly that the center’s focus must be on students and not the wider community, raising concerns that programming that welcomed non-students would be cut. And second, it calls on the center to work with Courage, a church-sanctioned organization that critics say harms L.G.B.T. Catholics by supporting conversion therapy.

The departure of the Paulists from Ohio State is, at first glance, the type of change in leadership that can be painful for any faith community. But the anger and disappointment expressed by some in the community, including the Paulists, points to challenging questions about the role of campus ministry centers and perceived ideological shifts among young Catholics and what they seek from their church.

Katie Gleason, the director of campus ministry at the St. John Church and Student Center at Michigan State University, has ministered to students there, her alma mater, for more than a decade. She said that established communities, made up of both students and local residents, that formed around particular religious orders, or even a beloved priest, can have difficulty adapting to “the needs of young adults, which change very rapidly from generation to generation.”

Students who attend Mass at St. John’s, she said, are often interested in more traditional devotional practices, such as adoration, chant and Bible study, whereas non-students, or permanent community, tends to focus on liturgical creativity and social justice outreach.

The interactions between the generations can offer “an opportunity to show students how to put faith into action in ways that they may not have experienced,” Ms. Gleason said. But sometimes the permanent community views the interest in traditional forms of Catholicism “as an unwelcome surprise,” which can lead to tension. Still, she said the students and community worship together at Mass, an experience she hopes will prepare students for parish life once they graduate.

“The needs of young adults…change very rapidly from generation to generation.”

In Wisconsin, the Rev. Eric Nielsen, pastor and executive director of the Catholic Student Center at Saint Paul Parish, took a different approach.

Beginning in the 1990s, he said, some students complained that the parish was too focused on the permanent community.

“They had a lot of influence because of the length of the time that they were there, and secondly, because they were providing the money that funded the ministry, because they had jobs,” Father Neilsen recalled.

He said that when he arrived as pastor, in 2006, the undergraduate students seemed interested in traditional styles of worship and personal faith formation whereas the older community, by contrast, sought volunteer opportunities and a more casual style of worship. Father Nielsen decided to focus more intensely on the needs of students, which he said included a greater emphasis on prayer and sacraments, thus limiting the amount of time he could spend serving the older members.

Today, the parish primarily serves students, evidenced by the number of people who attend Mass each weekend. During the school year, Father Nielsen said, about 800 to 1,000 people are in church, compared to just over 200 during the summer.

“I didn’t neglect the permanent community, but I didn’t really serve them that well, either,” Father Nielsen said. “Little by little, they migrated back to the parishes where they were better served.”

At the University of Connecticut, the Rev. Jonathan Ficara said he is trying to build an integrated community but acknowledged that he also sees challenges.

When he was a student at the university in the early 2000s, Father Ficara said, he remembers St. Thomas Aquinas Parish, which serves the UConn community, was filled with students, plus faculty and staff and their families. Today, he said, as the parish continues to recover from diminished attendance due to pandemic restrictions, he hopes to recreate that kind of environment.

“We’re trying to rebuild the community to include the students and the wider campus population, with a centeredness on the Gospel,” he said.

Father Ficara, who is also the vocations director for the Diocese of Norwich, Conn., said that he recognizes young people are in “a different season of life and asking different questions” than older Catholics, but he believes both populations can benefit from spending time together.

At Ohio State, students seemed of mixed minds about the changes at the Newman Center.

“I’m definitely welcoming the change, and I’m actually looking forward to the possibility of having a more traditional liturgy,” sophomore Keira Williams told the National Catholic Register earlier this year.

But Julia Dreiling, a third year student, told America she has not returned to Mass since the Paulists left, “because I don’t feel safe or welcome there. It’s been really hard.”

The memo from the bishop’s office said that a variety of lay movements must be welcome in the center, including Courage, a church-affiliated ministry that encourages gay and lesbian Catholics to refrain from sexual activity but which critics say points people toward the widely discredited practice of conversion therapy. While the Newman Center’s bulletins and social media accounts have not yet shared any news about Courage being invited to the church, the possibility that it could be has upset some people.

Like other Paulist-affiliated ministries, the Newman Center at Ohio State had been welcoming to L.G.B.T. Catholics.

Like other Paulist-affiliated ministries, the Newman Center at Ohio State had been welcoming to L.G.B.T. Catholics and their friends and families. For his part, Bishop Fernandes told a local television station in July that his vision for the Newman Center was based solely on evangelization and vocations and had “nothing to do with” the center’s perceived openness to L.G.B.T. Catholics.

But a former chaplain said working with Courage could alienate some in the community.

Other parts of the bishop’s vision for the Newman Center, as outlined in the memo, have already been implemented. Confession and adoration is now available at least six days a week. Sunday Masses are now filled predominantly with students. And though there is still outreach to recent graduates—an alumni night is scheduled for later this month and a new group for graduate students and young professionals in their 20s and 30s—programmatic offerings are now aimed primarily at students. (Father Streitenberger, through a spokesman for the Archdiocese of Columbus, declined to be interviewed for this article.)

Back in July, at the final Mass for the Paulists at the Newman Center, hearts were heavy.

“This is a very sad day, but also one filled with joy,” Rene Constanza, C.S.P., the president of the Paulists, said according to the Columbus Dispatch. “Our presence goes way back, and guess what? Our mission…will continue.”

Today, their legacy is just a memory, as the students who benefitted from their ministry graduate and move on to other parishes. But Mr. Bohman, the recent O.S.U. graduate, said he hopes that the changes reap benefits despite the pain they are causing the community.

“I know it’s a challenging transition for everyone, including the people who will be taking over the leadership at the church and trying to figure out how to serve the students,” said Mr. Bohman, who is still attending Mass at the Newman Center and helping to organize its recent graduates and young professionals group. “I want to be hopeful that it could be a good change and reach more students at Ohio State. That’s what I’ll be praying for, that it will be good for the church as a whole.”