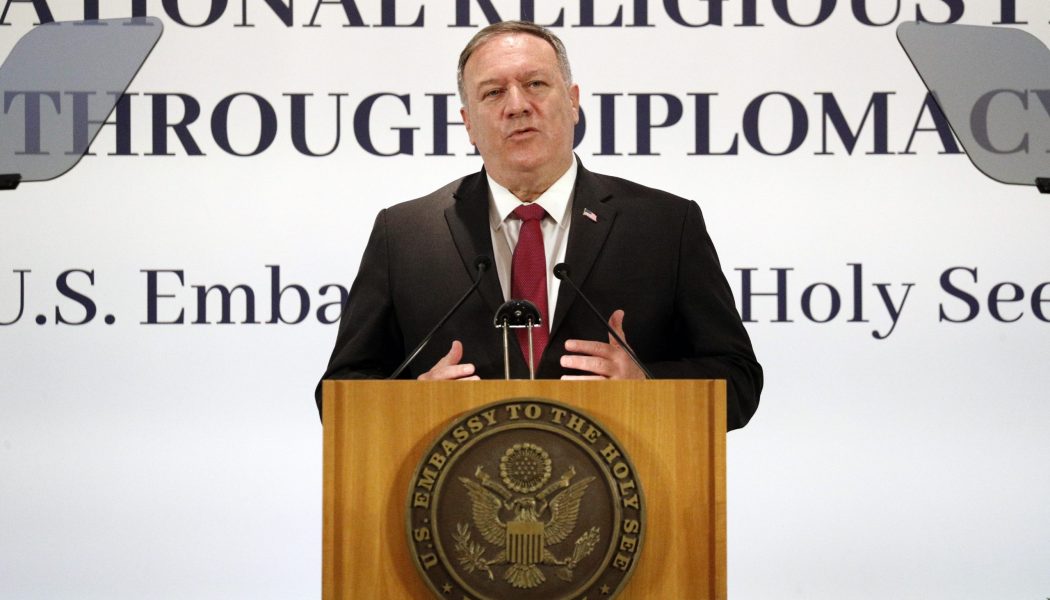 ROME – Over the years, I’ve occasionally been asked to give talks or write pieces about the cultural gap between the Vatican and the US. I typically choose the title, “America is from Mars, Rome is from Venus,” because it does sometimes feel like they’re just on different planets.

The latest chapter in that incomprehension has been on display this week, as US Secretary of State Mike Pompeo and other senior members of the Trump administration are in Rome, in part for exchanges with their Vatican counterparts, and their disagreements over China are very much in the air.

Yesterday, Pompeo spoke at an event on diplomacy and religious freedom organized by the US Embassy to the Holy See, led by Ambassador Callista Gingrich, which also featured Sam Brownback, the US Ambassador-at-Large for International Religious Freedom, and Nathan Sales, Counterterrorism Coordinator for the US State Department and Acting Undersecretary for Civilian Security, Democracy and Human Rights.

They were joined by Italian Cardinal Pietro Parolin, the Vatican’s Secretary of State, as well as British Archbishop Paul Gallagher, the Secretary for Relations with States, effectively making him the Vatican’s Foreign Minister, as well as a handful of other Vatican figures who were in the audience.

Today, Pompeo is holding private meetings with Parolin and Gallagher at the Vatican. His Rome swing comes just after, and just before, two events that set the stage for tension.

It’s after a Sept. 18 article by Pompeo in the American journal First Things, in which he argued that Pope Francis and the Vatican risk losing their moral authority by remaining silent while China persecutes and brutalizes religious minorities, including not only Christians but also Uyghurs and other Muslims, practitioners of Falun Gong, Tibetan Buddhists, and other communities.

The event also was shortly before the US election, in which President Donald Trump is trying to win reelection in part by appealing to religious voters, including Catholics, which means it’s hard not to suspect that everything Trump people do these days has a political edge.

During Wednesday’s embassy event, none of the administration figures directly complained about the Vatican’s line, but they all spoke forcefully about China. Pompeo went the farthest, urging religious leaders to a “bold moral witness” in defense of religious freedom and asserting that “nowhere is religious freedom under assault today more than in China.”

Sales wasn’t far behind, describing abuses in China and warning, “The world is watching … history will judge whether freedom-loving people met this challenge.”

As for the Vatican, Parolin and Gallagher were polite during the symposium itself, but not so much the moment they stepped out of the meeting room and into the lobby of Rome’s Westin Excelsior Hotel. Both were approached by reporters, and neither seemed especially inclined to discretion.

Parolin openly said the Vatican was “surprised” by Pompeo’s article, especially since his visit to Rome was already planned and those encounters would have been the “opportune” and “suitable” place to voice such concerns.

For his part, Gallagher said that Pompeo had requested a meeting with Pope Francis but had been turned down because it’s too close to the election, a point that was also confirmed by Parolin.

Watching the whole thing play out, it seems possible that some of the obvious testiness is because both sides are making flawed assumptions about the other.

On the Vatican side, there appears suspicion that Pompeo and his colleagues are playing politics, trying to look tough with the pope on China in order to gain votes.

In reality, it seems clear that the ticking clock the US side hears in its head isn’t the beginning of November but the end of October, when the Vatican is set to renew its 2018 deal with Beijing over the appointment of bishops. The Americans believe it’s a pact with the Devil, causing the Vatican to go silent about Chinese atrocities and effectively handing control of the church in China to the Communist regime.

Pompeo and his allies thus have decided to launch a last-ditch effort to persuade, even cajole, Rome into changing its tune. Whatever one makes of that, it’s not only about hustling for votes. Among other things, the vast majority of Americans who’ll cast ballots probably don’t know what the Vatican’s line on China is and couldn’t care less.

Granted, this close to an election, nothing any administration official does is ever entirely unpolitical. However, just as hawks during the Cold War genuinely regarded the Soviet Union as the “Evil Empire,” their heirs today are convinced China is malevolent and getting worse, and their hard line isn’t just for show.

As for the US side, it sometimes seems they believe the Vatican is naïve about what’s going on in China, and if they just shout loudly and often enough, maybe it’ll get through.

The thing is, figures such as Parolin and Gallagher are exceedingly well aware of the realities on the ground. Through a network of bishops, priests, missionaries and laity, the Vatican has access to boots-on-the-ground intelligence that would be the envy of any secular state, including the US.

Instead, the Vatican simply has a different diplomatic philosophy about how to cope with bad actors. Over time, they believe, engagement is a better strategy than isolation and confrontation, and that, with patience, small gains can produce big dividends.

Here’s how Parolin put it yesterday: “We support the politics of small steps … We believe that each result, even if it is not striking, even if it’s not showy, even if at the beginning it doesn’t appear to give great results, is a step forward towards greater religious liberty.”

As ever, misreading someone risks turning an inevitable, but manageable, disagreement into a personal animosity. If you genuinely believe what you’re saying but someone accuses you of an ulterior motive, it rankles; if you know what you’re talking about but somebody treats you like you’re ill-informed, it’s offensive.

At least on China, the Americans don’t just seem to be playing politics, and the Vatican isn’t in denial. If each side could accept that about the other, it might not untie the knot, but at least the rope tying this odd couple together might not chafe quite as much.