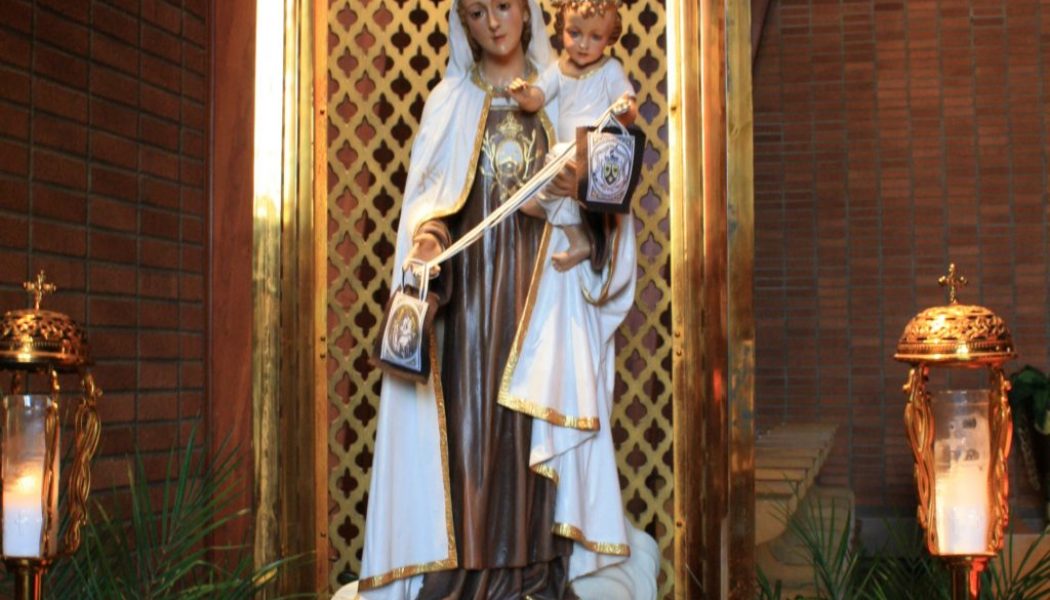 We celebrate the feast of Our Lady of Mount Carmelon July 16, because, according to Carmelite traditions, this is the date in the year 1251 on which the Blessed Virgin originally gave the brown scapular to St. Simon Stock.

This apparition took place in England, either at Cambridge or Aylesford, and came about after St. Simon, following a pilgrimage to the Holy Land, became a Carmelite friar. He had met a group of hermits on Mount Carmel who claimed to be the successors of Elijah and his followers, and after he returned to England, he was eventually elected Superior-general of the Carmelite Order.

He was praying to Our Lady when he had his famous vision of her bringing the brown scapular to him with the following words, which are preserved in a 14th century narrative: “This will be for you and for all Carmelites the privilege, that he who dies in this will not suffer eternal fire.”

Eventually this privilege was extended to the laity, and this promise implies that the Blessed Virgin will intercede to ensure that the duly enrolled wearer of the scapular obtains the grace of final perseverance, that is of dying in a state of grace, and so ultimately will go to heaven.

Regarding the feast of Our Lady of Mount Carmel itself, this was first approved by Pope Sixtus V in 1587, and after Cardinal Robert Bellarmine had examined the traditions of the Carmelite Order on this point, it became the patronal feast of the Order. Later on, during the time of Pope Benedict XIII (d. 1730), it was extended to the whole Church.

As for the brown scapular, over the centuries numerous popes have enriched it with many indulgences and privileges, including 20th century popes, such as St. Pius X, Benedict XV, Pius XI, and Pius XII.

Clement VII and Clement X, 16th and 17th century popes, decreed that all who wear the scapular participate in a special manner not only in the fruits of the spiritual works of the Carmelites, but also in all the good done throughout the entire Church. Therefore, there are many good reasons for Catholics to wear this sacramental.

One of the best books about the scapular is Sign of Her Heart by John Haffert. He was involved in promoting the scapular before he became the co-founder of the Blue Army, and in 1940 wrote this book under the original title of Mary in Her Scapular Promise.

This is a very full treatment of the whole history of the brown scapular, and goes back to the time of the Prophet Elijah on Mount Carmel, over 800 years before Christ. Haffert relates how hermits who met King St. Louis IX of France on Mount Carmel claimed to be the spiritual descendants of Elijah. The king had gone there as a Crusader to the Holy Land in the 13th century, at about the same time that St. Simon received the scapular from Our Lady.

The hermits, who called themselves the “Hermits of Saint Mary of Mount Carmel”, told St. Louis that the successors of Elijah handed down a tradition about the coming of the Immaculate Virgin, based on the account of the “little cloud” which the prophet’s servant saw arising from the sea (1 Kgs 18:44). She finally came to the town of Nazareth, which lies across the plain at the foot of the Mount, and she visited them and rested among them on her return from Egypt with the Holy Family. On Mount Carmel, they had erected the first chapel ever dedicated to the Mother of God, and later, they received custody of the Holy House in Nazareth from Mary.

Apart from that tradition, the cloak of Elijah has been seen as a symbolic type of the scapular, especially as he left it to Elisha, his successor, and it turned out to have miraculous powers (2 Kgs 2:13-14).

After St. Simon Stock’s vision became known, devotion to the scapular began to spread throughout the Church. But, as John Haffert relates, the devil and the ravages of time seemed determined to destroy this newfound devotion. Many of the original documents about the scapular were held in the Carmelite libraries at Bordeaux in southwestern France, where St. Simon had died, and in London.

When the Black Death afflicted Europe between 1347 and 1351, the library at Bordeaux was burned by the city authorities to prevent contagion, and later on, during the Reformation, the London library was destroyed at the order of Henry VIII, and so the priceless early documents were lost.

Fortunately one early work containing details of the origins of the brown scapular did survive, and this is the Viridarium, a book written in 1389 by the then General of the Carmelite Order, John Grossi. In this, there are details about the scapular vision as being given to St. Simon after he had prayed the beautiful prayer to Our Lady, Flos Carmeli, “Flower of Carmel.”

Mother so tender,
Who no man didst know,
on Carmel’s children
Thy favors bestow.
Star of the Sea.

Other important proofs have also come to light in the intervening centuries, especially in historical Carmelite Constitutions and Chapter pronouncements, and taken all together, this means that we can have confidence in the historical reality of the scapular vision and of the promise made by Our Lady.

There is also a Fatima connection to the brown scapular regarding the final apparition on Oct. 13, 1917. While the great crowd of 70,000 people was seeing the miracle of the sun, Jacinta, Francisco and Lucia saw various apparitions the Holy Family, and also a final apparition of the Blessed Virgin as Our Lady of Mount Carmel and holding a brown scapular.

Later on Sister Lucia said: “The Rosary and the Scapular are inseparable,” and “All Catholics should wear the Scapular as part of the Fatima message.”

And so, on this feast of Our Lady of Mount Carmel we can ponder how important the brown scapular is as a sign of consecration to her and a pledge of eternal life, and daily renew our own devotion to the Blessed Virgin through our devout wearing of it.

Donal Anthony Foley is the author of a number of books on Marian Apparitions, and maintains a related web site at www.theotokos.org.uk. He has also written two time-travel/adventure books for young people, and the third in the series is due to be published later this year – details can be seen at: http://glaston-chronicles.co.uk