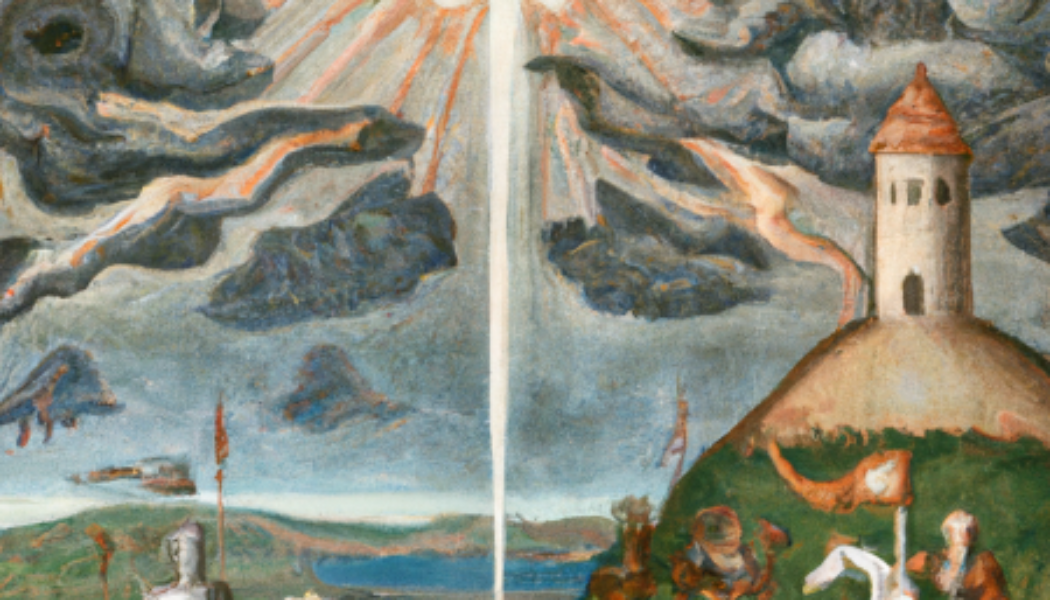 The disciples asked Jesus, “Why do you speak to the people in parables?” The gospels show him explaining parables to his apostles in private, but the meanings of Jesus’ symbolic stories about the Kingdom of God were kept somewhat hidden from the crowds. Christ’s enemies and scoffers would dismiss these tales as nonsense but those with faith in him would keep them and contemplate them. The foes to his public ministry walked away with no additional ammunition to attack him with, but his faithful disciples would discover wisdom in his teachings. As Jesus says, “To anyone who has, more will be given and he will grow rich; from anyone who has not, even what he has will be taken away.”

Sometimes the gospels explicitly tell us Jesus’ interpretations of his parables, as with The Parable of the Sower or The Parable of the Weeds. But many parables get presented without being unpacked, like our parables today: a parable about building a tower and a parable about considering battle against a stronger king. The context gives us clues to their meaning but some ambiguity remains. I believe this openness to interpretation can be intentional – inspired by God to convey multiple ideas at the same time, like that optical illusion where two profiled faces outline a vase between them, or the one where the same image depicts either an old woman or a young lady. Is the tower being built in today’s parable a good thing or a bad thing? Is the opposing king we contemplate fighting a wicked one or righteous? Each of these interpretations teaches us a lesson for the Kingdom of God.

In the first parable, Jesus asks, “Which of you wishing to construct a tower does not first sit down and calculate the cost to see if there is enough for its completion? Otherwise, after laying the foundation and finding himself unable to finish the work the onlookers should laugh at him and say, ‘This one began to build but did not have the resources to finish.’” In this parable, is the tower something good or something bad?

What is the Bible’s first and most famous tower? It’s the Tower of Babel in Genesis. The people at Babel said: “Come, let us build ourselves a city and a tower with its top in the sky, and so make a name for ourselves; otherwise we shall be scattered all over the earth!” This was after God had commanded Noah and his descendants to “Be fertile and multiply and fill the earth.” But the people of Babel turned inward, seeking to glorify their own name apart from God through building a city and tower rivaling heaven.

The God of heaven, whose name is above every name, had to come down to examine their efforts. And God, foreseeing what evils Babel’s unchecked hubris and concentration of power would bring about on earth, confuses their speech. Having amusingly lost the ability to even say, “Hey, pass me that brick,” great and mighty Babel must abandon its proud project and its people scatter across the earth. Babel is the image of a wicked tower project, but another kind of tower in the Bible has positive connotations.

Both the Old Testament prophet Isaiah and Jesus Christ in the gospels speak of building watchtowers for vineyards to safeguard their previous fruits. Jesus’ Parable of the Tenants begins, “A man planted a vineyard and put a fence around it and dug a pit for the winepress and built a tower…” This echoes Isaiah’s song about his friend’s vineyard, which also notes, “within it he built a watchtower.” A farmer would dwell atop his tower to watch and guard his vineyard during harvest time, on the lookout for hungry foxes, badgers, jackals, and even human thieves. But a vineyard’s half-finished watchtower is of little or no use at all. Unlike the Tower of Babel, this sort of tower is good and wise to complete.

There also are two ways to take today’s second parable. Jesus asks, “What king marching into battle would not first sit down and decide whether with ten thousand troops he can successfully oppose another king advancing upon him with twenty thousand troops? But if not, while he is still far away, he will send a delegation to ask for peace terms.” Can you prevail against an enemy who outnumbers you two-to-one? In ancient battles the side with the far more numerous forces typically won, but there were exceptions.

In the 1st Book of Maccabees, the army of the wicked, pagan King Antiochus, led by a commander who sought to ‘make a name for himself,’ came to fight the people of God on the battlefield. The soldiers of the Jewish leader, Judas Maccabeus, asked him: “How can we, few as we are, fight such a strong host as this? Besides, we are weak since we have not eaten today.” But Judas replied: “Many are easily hemmed in by a few; in the sight of Heaven there is no difference between deliverance by many or by few; for victory in war does not depend upon the size of the army, but on strength that comes from Heaven.” The people of God prevailed that day. Though outnumbered, the Jews would go on to win battle after battle against their enemy, so long as they were faithful in serving and honoring God.

So what do today’s parables mean for us? Well, what kind of tower are you intending to build? Is it a structure of sin, vanity, and pride (like the Tower of Babel) which will not reach heaven? Then sit down, recognize your foolishness, and change your plans, lest your foreseeable failure become your mockable, lasting legacy. Or do you plan to build a watchtower to guard your soul and protect your good fruits from anything or anyone (that is, any temptation) that would rob you? Then do not only invest in your project halfway. You cannot clear a ten-foot-wide chasm with five-foot jumps. Our hearts must not be divided, but fully devoted to Jesus Christ.

And who is the powerful king we contemplate doing battle with? If that king in the parable is God we would be foolish to oppose him. You could not defeat him or the coming of his Kingdom with even a billion troops at your command. So it is wise to seek out and accept his peace terms now before Jesus Christ returns. Alternatively, what if that king in our parable is the Evil One? Then we should not be afraid. The devil and the demons hate us and war against us; they are legion. Yet “victory in war does not depend upon the size of the army, but on strength that comes from Heaven.” As St. James writes, “God resists the proud, but gives grace to the humble. So submit yourselves to God. Resist the devil, and he will flee from you.”

In conclusion, as you can see, the simple parables of Jesus contain riches for those who listen and keep them. Reject the foolishness of pride and vanity. Resist sin and the devil by being fully allied with Christ. Do not have a divided heart, but instead wisely invest all-in with Jesus.

This entry was posted on September 3, 2022 at 6:31 pm and is filed under Homily, Parables, Sunday Homilies, Wisdom. You can follow any responses to this entry through the RSS 2.0 feed. You can leave a response, or trackback from your own site.