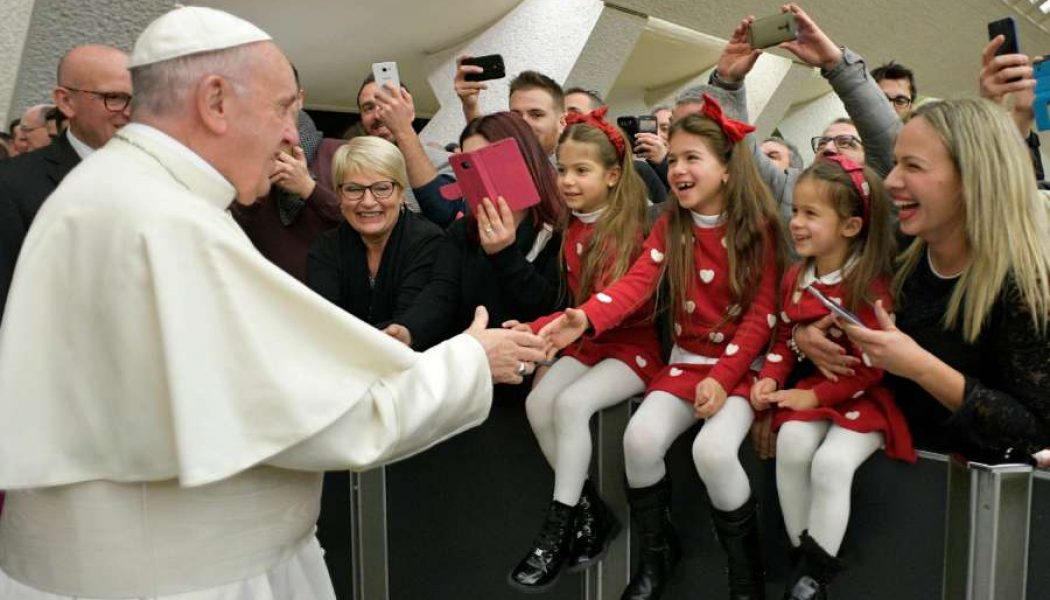 Vatican City, Dec 29, 2019 / 05:30 am (CNA).- On feast of the Holy Family of Nazareth Sunday, Pope Francis encouraged families to get off their cell phones and talk to one another.

“We need to retake communication within the family: parents, children, grandparents and siblings must communicate with each other,” the pope said. “This is your assignment for today for the feast of the Holy Family.”

Pope Francis said that the Holy Family is a model for families today in “following the Gospel, the foundation of holiness in a family,” as they prayed, worked, and communicated with each other.

“The Holy Family of Nazareth represents a choral response to the will of the Father. The three members of this exceptional family help each other to discover and carry out God’s plan,” he said.

“The family is a precious treasure: we must always support and protect it,” the pope said.

The Holy Family was “totally available to God’s will,” he said, providing an example of obedience and openness for families today.

The pope pointed to Mary’s obedience to God at times when she did not fully understand God’s plans for her.

“Mary silently meditates, reflects and worships the divine initiative. Her presence at the foot of the cross consecrates this total availability,” the pope said.

“As for Joseph, the Gospel does not bring us a single word: he does not speak, but acts by obeying,” Francis added.

An example of this was Joseph’s trust in God’s will as he fled with his family to Egypt.

“Under the guidance of God, represented by the Angel, Joseph removes his family from the threats of Herod,” he said. “The Holy Family is thus in solidarity with all the families of the world forced into exile, solidarity with all those who are forced to abandon their land because of repression, violence, war.”

Pope Francis asked for prayers for the victims of a car bomb in Mogadishu, Somalia that killed over 70 people Dec. 28, and expressed his closeness to all family members mourning their loss.

“Let us entrust to Mary, ‘Queen of the family,’ all the families of the world, especially those experiencing suffering or unease, and we invoke her maternal protection on them,” Pope Francis said.

Study to shew thyself approved unto God, a workman that needeth not to be ashamed, rightly dividing the word of truth.
2 Timothy 2:15
DailyVerses.net

The reason why this U.S. Navy destroyer flies a Jolly Roger pirate flag…

I taught and worked with Amy Coney Barrett. Here’s what people get wrong about her faith…..

Sts. Cosmas and Damian — the martyr doctors of Turkey…

What you need to know about Amy Coney Barrett’s faith…

What Amy Coney Barrett’s ‘People of Praise’ community actually is…

The conversion of Paul

A grandfather’s advice on prayer…