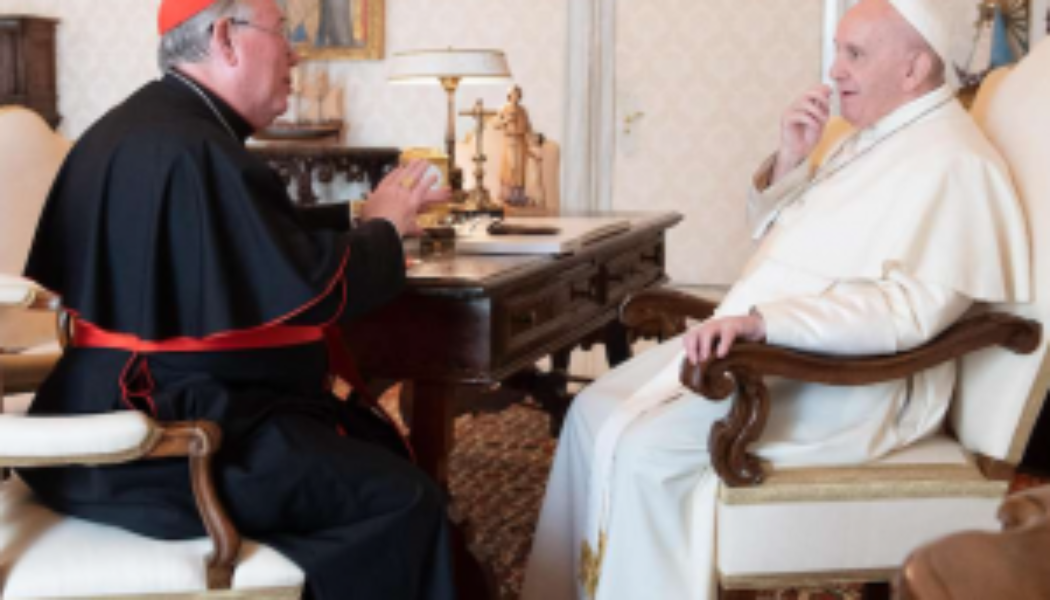 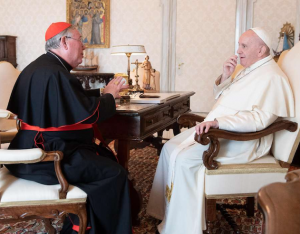 If you want to receive (or go back to receiving) a notification for every new article, click HERE and subscribe to the Newsletter from Settimo Cielo!

Incredible but true. Just now now when in a few decades it has lost a good half of its forces, the Society of Jesus has surged to the heights of command of the Catholic Church as never before.

Francis’s story is well known. He is the first Jesuit pope in history: he who notwithstanding had more adversaries than friends in the Society and took care not to set foot in its general curia whenever he came to Rome as a cardinal.

But the innovation is that in this last phase of his pontificate – declining in age but not in ambitions – Francis has equipped himself with a veteran attack team, all his own and made up entirely of Jesuits.

The top man of this team is without a doubt Cardinal Jean-Claude Hollerich (pictured), archbishop of Luxembourg. Top man, in Jorge Mario Bergoglio’s plans, both for today and for tomorrow.

For today, the task assigned to him by Francis is to steer, as relator general, the world synod that got underway in 2021 and will last at least until 2024, but in the pope’s mind even beyond, with the task of remodeling the Church under the banner of none other than a permanent “synodality.”

While for tomorrow it is no mystery that Hollerich is also Francis’s candidate “in pectore” for his succession, on which the current synod will have decisive influence, effectively obliging the future pope – whoever he may be – to take delivery on and continue the “process,” a bit as happened to Paul VI with the Vatican Council II inherited from John XXIII.

The general rehearsal of this world synod is the one underway in Germany, which is already infecting other national Churches without Francis’s opposing any effective restraint, with the inevitable litany of fashionable reforms, ranging from married priests to women priests, from new sexual and homosexual morality to the democratization of Church governance.

It is impossible not to recall that some of these were the reforms that another great Jesuit, Cardinal Carlo Maria Martini (1927-2012), had included in the agenda of the future Church in a memorable 1999 speech. Martini is known to have had a negative view of Bergoglio, but the supporters of the current pontificate are having a field day making him the “prophet” of the reforms for which Francis is supposedly paving the way at last and of which Hollerich has already repeatedly said he is in favor.

“L’Osservatore Romano” published last October 24 a comprehensive agenda-setting interview with this cultured Jesuit cardinal with twenty-seven years of mission in Japan behind him. And in it he once again expressed the hope for “a paradigm change” in the pastoral care and doctrine of the Church on homosexuality, because homosexuals too “are the fruit of creation” and therefore are not “rotten apples” but “something good.” Of course, there is no room – the cardinal added – for a sacramental marriage between persons of the same sex, because the procreative purpose that characterizes a marriage is lacking, “but this does not mean that their affective union has no value.”

And to the editor of “L’Osservatore Romano” who brought up the fact that the bishops of Belgium have spoken out in favor of the blessing of homosexual unions, Hollerich replied: “Frankly, the question does not seem decisive to me. If we keep to the etymology of ‘bene-dire’ [bless, literally ‘well-speak,’ Tr.], do you think that God could ever ‘dire-male’ [‘speak ill,’ Tr.] of two persons who care about each other?”

These words of Hollerich’s spontaneously bring up the question: but wasn’t it another high-ranking Jesuit at the Vatican, Cardinal Luis F. Ladaria, in his capacity as prefect of the congregation for the doctrine of the faith, who prohibited the blessing of homosexual unions in a “Responsum” made public on March 15 2021?

And was it not Francis himself who had “given his consent” to the publication of this “Responsum,” after having been “informed” of it, as written at the bottom of the document?

Just so. Except, however, to take note that the following Sunday, at the Angelus, the pope had made it clear that he had no liking at all for “theoretical condemnations” or “claims of legalism or clerical moralism” where what are needed instead are “gestures of love.” And “authoritative Vatican sources” had anonymously made it known that with this he was criticizing none other than the “Responsum” that prohibited the blessing of homosexual unions, which he had approved in words.

In short, humiliated by his confrere the pope, the hapless Cardinal Ladaria is the exception that confirms the rule. He is the old school Jesuit whom Bergoglio keeps on the bench while waiting to send him into retirement, off his team. Requiring him in the meantime to answer “no” to those cardinals – and there have been some – who have asked him to call Hollerich back to respect for correct doctrine.

But in addition to Hollerich, there are two other Jesuits whom Francis has recently made cardinals and has put on the team in important roles.

The first is the Canadian Michael Czerny, for many years more a competitor than a coworker of the Ghanaian cardinal Peter K. A. Turkson, first at the pontifical council for justice and peace and then at the dicastery for promoting integral human development, of which he has now become prefect. Czerny was also the special secretary of the synod for the Amazon. From the defense of nature to migrants, to the “popular movements,” he is the man Bergoglio avails himself of in these fields he favors.

The second is the Italian Gianfranco Ghirlanda, former rector of the Pontifical Gregorian University and a seasoned expert in canon law. Among his tasks is that of translating into juridical provisions the imperious acts that Francis carries out with the air of an absolute monarch. From Ghirlanda, for example, came the perfunctory conclusion of the longstanding theological dispute between powers of orders, those derived from episcopal ordination, and powers of jurisdiction, those conferred by a higher authority, opting for the latter in order to place some lay people as well, men or women, at the head of the Vatican curia, with the simple mandate of the pope. Again from Ghirlanda, in his role of juridical “factotum” at the service of Francis, came the dismantling and refounding imposed by the pope on the Order of Malta.

But that’s not all. Also among Jesuits who are not cardinals there are some whom the pope has placed in key roles, at his service.

In the general secretariat of the synod of bishops there is a consultant who is in fact the associate closest to Cardinal Hollerich. It is Fr. Giacomo Costa, former editor of the magazine “Aggiornamenti Sociali” of the Milan Jesuits and vice-president of the Fondazione Carlo Maria Martini.

Not to mention Fr. Antonio Spadaro, editor of “La Civiltà Cattolica” and very close to Francis since his election as pope, he too very active and urgent in promoting the world synod on synodality and in particular in involving in the adventure – with important help from his predecessor at “La Civiltà Cattolica,” Bartolomeo Sorge (1929-2020) – the Italian episcopal conference, initially very distrustful.

And then there is the chapter of the Vatican finances, where Francis has appointed the Spanish Jesuit Juan Antonio Guerrero Alves as prefect of the secretariat for the economy, the office that oversees the entire sector.

Moreover, for a couple of years there has also been a Jesuit at St. Peter’s Basilica, alongside the cardinal archpriest Mauro Gambetti, the pope’s vicar general for Vatican City. It is Francesco Occhetta, secretary general of the “Fratelli tutti” foundation and until 2020 political columnist for “La Civiltà Cattolica.”

And there is also a Jesuit among the auxiliary bishops of the diocese of Rome of which the pope is bishop: Daniele Libanori, who is entrusted with the pastoral care of the city center.

With the pope the names listed make nine. And with Sorge and the “prophet” Martini eleven, naturally without counting Cardinal Ladaria. Such a team, entirely of Jesuits, had never been seen in command of the Church.