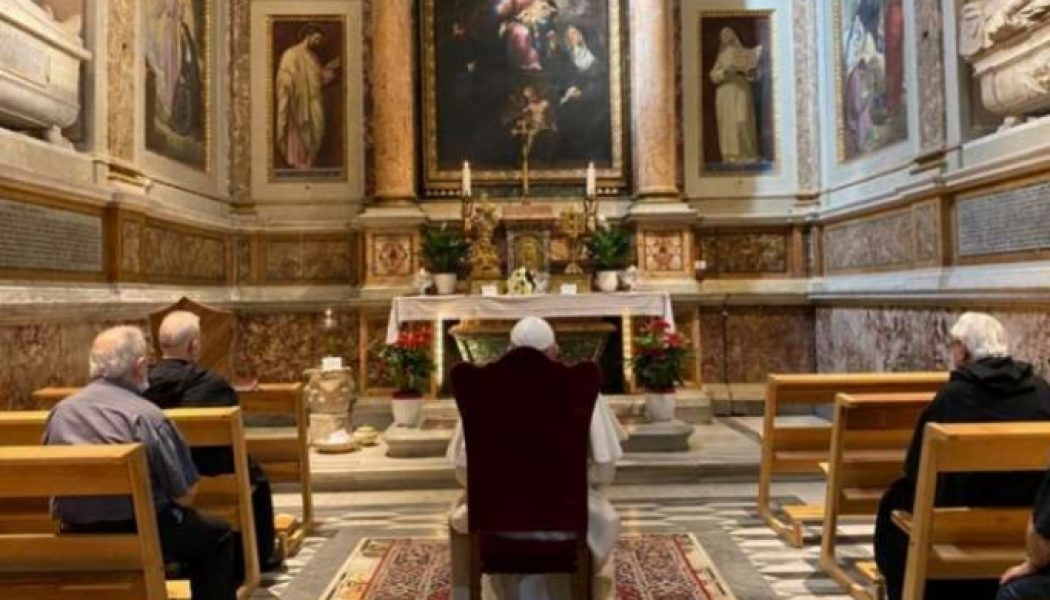 St. Monica is honored in the Church for her holy example and dedicated prayerful intercession for her son, St. Augustine, before his conversion.

VATICAN CITY — Pope Francis made a surprise visit to the Basilica of St. Augustine Thursday to pray at the tomb of St. Monica.

During his visit to the basilica in Rome’s Campo Marzio neighborhood near Piazza Navona, the pope prayed in the side chapel containing the tomb of St. Monica on her feast day Aug. 27.

St. Monica is honored in the Church for her holy example and dedicated prayerful intercession for her son, St. Augustine, before his conversion. Today Catholics turn to St. Monica as an intercessor for family members who are distant from the Church. She is the patron saint of mothers, wives, widows, difficult marriages, and victims of abuse.

Born into a Christian family in North Africa in 332, Monica was given in marriage to Patricius, a pagan who had a disdain for his wife’s religion. She dealt patiently with her husband’s bad temper and infidelity to their marriage vows, and her long-suffering patience and prayers were rewarded when Patricius was baptized into the Church a year before his death.

When Augustine, the eldest of three children, became a Manichean, Monica went tearfully to the bishop to ask for his help, to which he famously responded: “the child of those tears shall never perish.”

She went on to witness Augustine’s conversion and baptism by St. Ambrose 17 years later, and Augustine became a bishop and Doctor of the Church.

Augustine recorded his conversion story and details of his mother’s role in his autobiographical Confessions. He wrote, addressing God: “My mother, your faithful one, wept before you on my behalf more than mothers are wont to weep the bodily death of their children.”

St. Monica died soon after her son’s baptism in Ostia, near Rome, in 387. Her relics were moved from Ostia to the Basilica of St. Augustine in Rome in 1424.

The Basilica of St. Augustine in Campo Marzo also contains a 16th-century statue of the Virgin Mary known as the Madonna del Parto, or the Madonna of Safe Delivery, where many women have prayed for a safe childbirth.

Pope Francis offered Mass at the basilica on St. Augustine’s feast day on Aug. 28, 2013. In his homily, the pope quoted the first line of Augustine’s Confessions: “You have made us for yourself, O Lord, and our heart is restless until it rests in you.”

“In Augustine it was this very restlessness in his heart which brought him to a personal encounter with Christ, brought him to understand that the remote God he was seeking was the God who is close to every human being, the God close to our heart, who was ‘more inward than my innermost self,’ Pope Francis said.

“Here I cannot but look at the mother: this Monica! How many tears did that holy woman shed for her son’s conversion! And today too how many mothers shed tears so that their children will return to Christ! Do not lose hope in God’s grace,” the pope said.