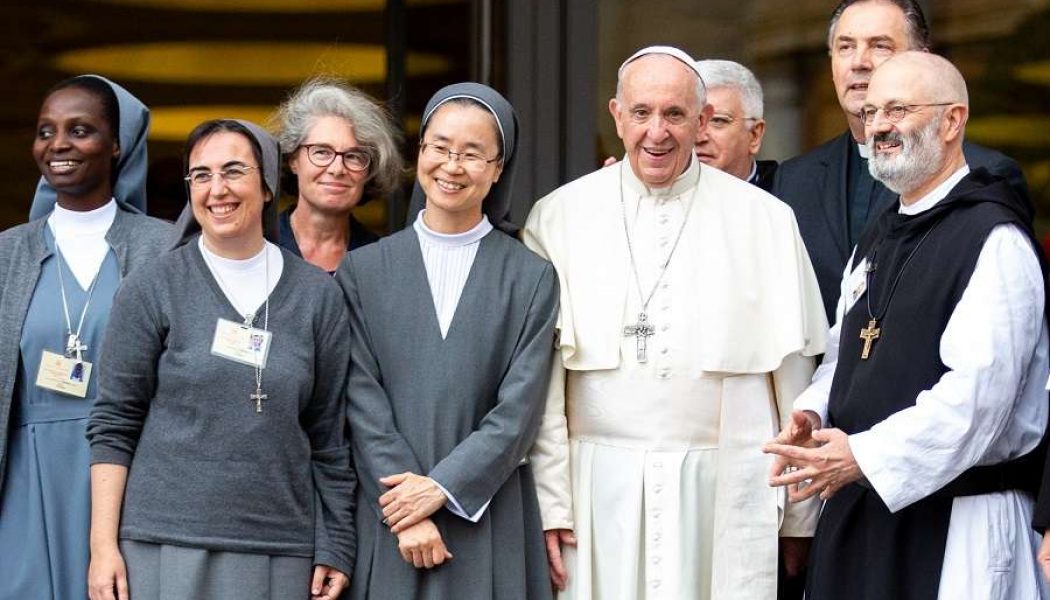 Vatican City, Feb 6, 2021 / 05:20 am MT (CNA).- Pope Francis Saturday appointed a Spanish priest and a French religious sister as under-secretaries of the Synod of Bishops.

It is the first time a woman has held a position of this level within the general secretariat of the Synod of Bishops.

Fr. Luis Marín de San Martín and Sr. Nathalie Becquart will replace Bishop Fabio Fabene, who was named secretary of the Congregation for the Causes of the Saints in January.

Working with and under secretary general Cardinal Mario Grech, Marín and Becquart will prepare the Vatican’s forthcoming synod on synodality, scheduled for October 2022.

In an interview with Vatican News, Cardinal Grech said in this position, Becquart will vote in future synods alongside other voting members, who are bishops, priests, and some religious men.

During the 2018 youth synod, some people asked why religious and consecrated women could not vote on the synod’s final document.

According to the canonical norms governing synods of bishops, only clerics – that is deacons, priests, or bishops – can be voting members.

Grech noted Feb. 6 that “during the last Synods, numerous synodal fathers emphasized the need that the entire Church reflect on the place and role of women within the Church.”

“Even Pope Francis highlighted several times the importance that women be more involved in the processes of discernment and decision making in the Church,” he said.

“Already in the last synods, the number of women participating as experts or auditors increased. With the appointment of Sr Nathalie Becquart, and the possibility that she will participate with the right to vote, a door has been open,” Grech stated. “We will then see what other steps could be taken in the future.”

Sr. Nathalie Becquart, 51, has been a member of the Congregation of Xavieres since 1995.

She has been one of five consultors, four of whom are women, to the general secretariat of the Synod of Bishops, since 2019.

Because of her extensive background in youth ministry, Becquart was involved in the preparation for the Synod of Bishops on young people, faith, and vocational discernment in 2018, was general coordinator of a pre-synod meeting, and took part as an auditor.

She was the director of the French bishops’ national service for the evangelization of young people and for vocations from 2012 to 2018.

Marín, 59, is from Madrid, Spain, and a priest of the Order of St. Augustine. He is an assistant general and archivist general of the Augustinians, based out of the order’s general curia in Rome, which is located just outside St. Peter’s Square in Rome.

A professor of theology, Marín has taught at a university and several Augustinian centers in Spain. He has also been a seminary formator, provincial counselor, and prior of a monastery.

As under-secretary of the Synod of Bishops, Marín will become the titular bishop of the see of Suliana.

Cardinal Grech said Marín “has a vast experience in accompanying communities in decision making processes and his knowledge of the Second Vatican Council will be precious so that the roots of the synodal way remain always present.”

He also noted that the appointment of Marín and Becquart will “undoubtedly” lead to other changes in the structure of the general secretariat of the Synod of Bishops.

“I would like that the three of us, and all of the staff of the Synod Secretariat, work out of the same spirit of collaboration and experience a new style of ‘synodal’ leadership,” he said, “a leadership of service that is less clerical and hierarchical, that allows participation and co-responsibility without at the same time abdicating the responsibilities entrusted to them.”