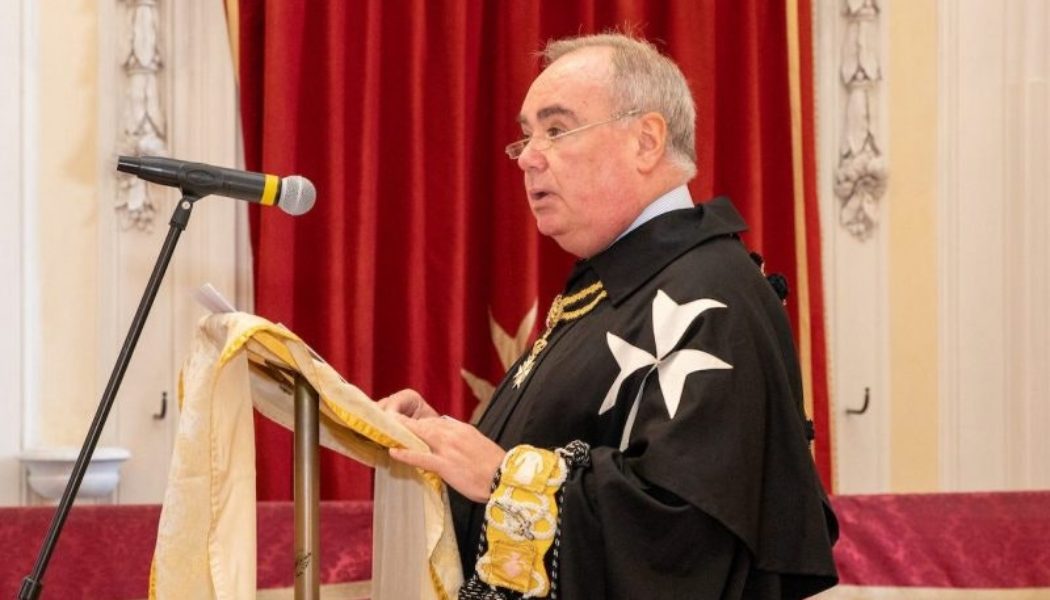 Pope Francis has appointed a new interim head of the Sovereign Military Order of Malta, following the sudden death of the Lieutenant of the Grand Master last week. The papal appointment is likely to bring a measure of stability at the head of the order, which has had four leaders since 2017.

Francis appointed the Canadian born Fra’ John T. Dunlap as Lieutenant of the Grand Master by decree Monday morning, instructing his special delegate to the order, Cardinal Silvano Tomasi, to inform the knights’ sovereign council of his decision. A copy of the decree was obtained by The Pillar.

Dunlap, 65, has worked for years as a lawyer in New York, and is the senior serving member of the order’s sovereign council. He will be sworn into his new position on Tuesday, according to a statement from the order’s Grand Magistry in Rome.

According to the order’s current constitutional charter, upon the death of Luzzago, leadership of the order then passed to the Grand Commander, 82 year old Fra’ Ruy Gonçalo do Valle Peixoto de Villas-Boas, on an emergency basis.

While the possibility of a direct papal appointment to the role is not foreseen in the order’s current law, in his decree appointing Dunlap, Francis stressed the interventions of previous popes in the internal governance of the order and recognized the ongoing constitutional gridlock facing the knights, saying that “unfortunately, new events and circumstances seem almost to want to prevent the Order of St. John the Baptist from walking the necessary path of renewal in fidelity to the original charism.”

In his decree appointing Dunlap, Francis noted that Luzzago’s sudden death had caused “a new moment of dismay and uncertainty” for the knights who were already in the midst of “an institutional crisis that has marked a wound in the hearts of many,” and prompted him to act.

The Order of Malta is both a Catholic religious order whose first class members take vows of poverty, chastity, and obedience, and a sovereign entity in international law, recognized by the United Nations and maintaining full diplomatic relations with nation states in support of its international relief work.

The order has been engaged in a protracted effort to reform its constitution and laws following the abdication of its former Grand Master, Fra’ Matthew Festing, in 2017. Festing’s abdication was triggered by Pope Francis’ intervention in an internal dispute between Festing and the order’s Grand Chancellor, Albrecht von Boeselager.

Following the abdication, Pope Francis directed the religious order to engage in a “spiritual renewal”, appointing a special cardinal delegate to oversee the process which quickly evolved into a constitutional reform process.

Efforts to draft a new constitution and canonical code for the knights have repeatedly stalled in recent years; there are conflicting reform agendas for the order among the knights themselves, and between the Vatican and the order’s headquarters in Rome.

Wrangling over the knight’s constitutional future has repeatedly delayed the convocation of a Chapter General of the order to approve a new document and elect a new Grand Master, a position vacant since the death of Festing’s successor, Della Torre, in 2020.

The reform process has been complicated by the Vatican’s involvement. In addition to creating the post cardinal delegate in 2017, appointing first Cardinal Angelo Becciu and then Cardinal Tomasi in 2020, Francis has also constituted his own commission to propose a revised constitutional text.

While that committee’s proposals have been broadly in line with the section of the order favoring keeping the Fras at the head of the order’s functional governance, it has met with opposition from the knight’s leadership in Rome, and the committee’s work has prompted concerns about the order’s sovereign status in international law.

Earlier this year, Francis announced he would hear various proposals for the order’s constitutional future before deciding personally on a final draft text to be approved by a Chapter General of the order.

Francis reiterated in his decree on Monday that, Dunlap’s appointment notwithstanding, special powers he grated to Cardinal Tomasi to bring the constitutional reform process to completion remain in force.

Senior sources within the order, on both sides of the constitutional debate, told The Pillar Monday that they welcomed the pope’s intervention, and said that Dunlap is a known supporter of retaining the Fras at the head of the knights’ governance and is broadly supportive of Tomasi’s proposals.

“Appointing Fra’ John was essential,” one senior knight told The Pillar, “Fra’ Ruy [the Grand Commander] is well respected — well loved — by everyone, but he simply isn’t suited to seeing through a new constitution.”

The same knight also suggested that Dunlap’s appointment could shift the dynamic in the listening sessions with Pope Francis, saying that Fra’ John “doesn’t see eye to eye” with the order’s Grand Chancellor, Albrecht von Boeselager, over the future role of the Fra’s.

“Fra’ Giacomo and Fra’ Marco were neutral characters in a lot of ways,” the knight said, “they took a lot of their queues from the Grand Chancellor. Fra’ John will be a very different kind of Lieutenant.”

However, another senior knight, close to the Grand Magistry in Rome, told The Pillar on Monday that the order’s sovereign council had received the news of Francis’ decision with “great happiness.”

“The pope has made it clear that he has a father’s concern for our order,” the knight said, “there is a lot of work still to be done and having stability is very necessary.”

Asked about Dunlap’s preferences for the order’s future, the knight said that “everyone knows the pope is listening to all voices in the reform process before making his decision, and everyone is confident the pope will decide what is best for our future.”

“Who is for or against this or that proposal is secondary — everyone is united in common with the pope,” the knight said.