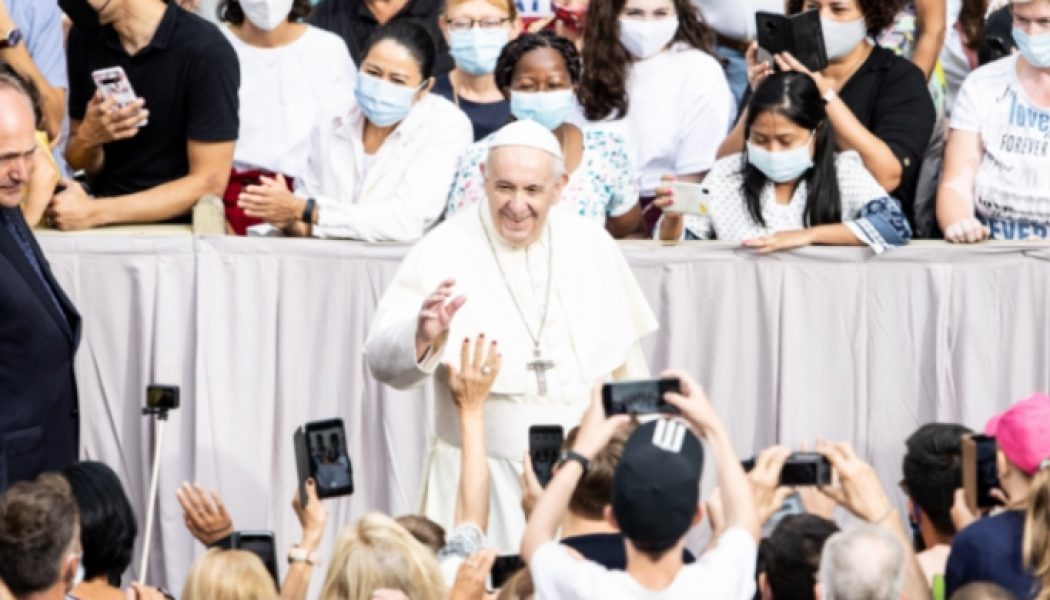 Pope Francis arrives for his general audience in the San Damaso Courtyard at the Vatican, Sept. 2, 2020. (Daniel Ibanez/EWTN)

Speaking to the crowd gathered for his General Audience, Pope Francis said, “Solidarity today is the road to take towards a post-pandemic world, toward the healing of our interpersonal and social diseases.”

VATICAN CITY — In his first Wednesday audience with pilgrims since Italy’s lockdown, Pope Francis called for solidarity to reawaken unity and bring God’s love to a suffering world.

“In the midst of crises and storms, the Lord challenges us and invites us to reawaken and activate this solidarity capable of giving solidity, support and meaning to these hours in which everything seems to be wrecked,” Pope Francis said Sept. 2 in the San Damaso Courtyard within the Vatican’s apostolic palace.

“A solidarity guided by faith enables us to translate the love of God in our globalised culture, not by building towers or walls — and how many walls are being built today — that divide and then crumble, but by interweaving communities and sustaining processes of growth that are truly human and solid,” the pope told the pilgrims.

Pope Francis recalled the unity experienced by Christ’s disciples at Pentecost. He said that God made himself present at that moment and inspired “the faith of the community united in diversity and in solidarity.”

“The Holy Spirit creates unity in diversity; He creates harmony … Others are not simply instruments, a mere ‘work force,’ but rather participate fully in building up the community,” he said.

“Solidarity today is the road to take towards a post-pandemic world, toward the healing of our interpersonal and social diseases. There is no other. Either we go on along the road of solidarity or things will be worse,” he said.

“From a crisis one comes out either better or worse. We have to choose. And solidarity is really a way to get out of the crisis better, not with superficial changes.”

He added: “Diversity in solidarity … possesses antibodies that heal social structures and processes that have degenerated into systems of injustice, into systems of oppression.”

Safety precautions were put in place to ensure that the pilgrims entering Vatican City for the papal audience maintained social distancing.

After a temperature screening and walk through a metal detector, pilgrims entered the apostolic palace through the great bronze door and proceeded up a flight of stairs to arrive at the courtyard.

By 8:30 a.m., the courtyard’s 500 spaced-out seats were full and a few seats were added to accommodate pilgrims arriving later.

When Pope Francis entered, he took his time greeting those standing next to the aisles. After the audience, he continued to greet and speak with masked pilgrims for around 30 minutes.

Pilgrims present at the audience commented on how the change of venue to the San Damaso Courtyard felt like a more intimate setting than St. Peter’s Square.

“The mood was just one of great excitement, and you could tell that the Holy Father was also happy to be back with all of the pilgrims. He took his time going through the lines and greeted almost every single person that he saw. He also would stop and talk to people for what seemed like a long time,” Fr. Joseph Hudson, an American priest present at the audience told CNA.

“The change of venue also to the piazza di San Damaso was I thought also significant. It felt like we were a little bit closer to the Holy Father, a little bit more connected, and that he was trying to be more present to us.”