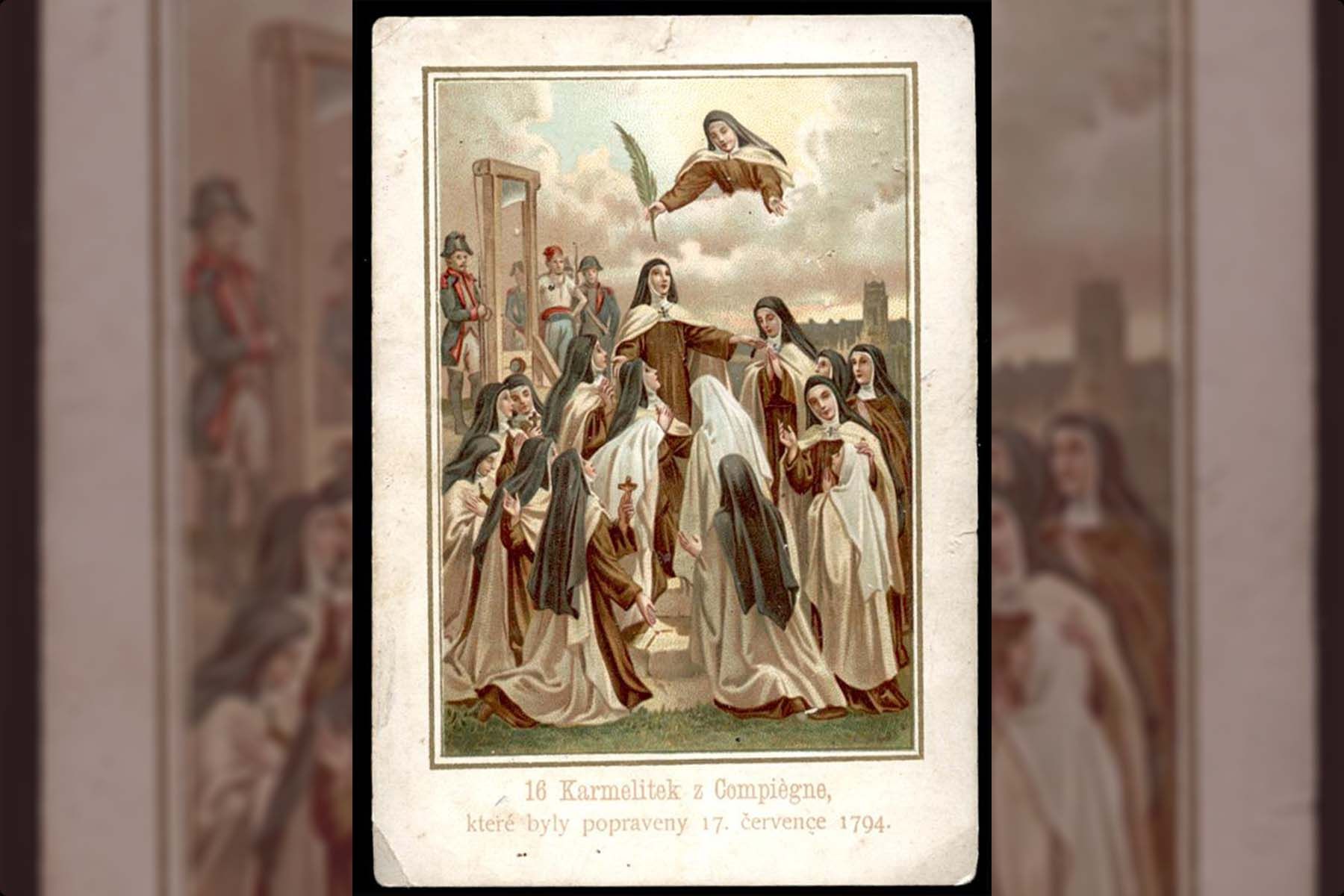 Beatified in 1906, the sisters’ fidelity to their vows and the remarkable witness of their deaths have inspired everything from novellas such as “The Song and the Scaffold,” to movies, and even a famous opera titled “Dialogue of the Carmelites,” inspired by the book of the same name written by famous Catholic novelist and essayist Georges Bernanos.

Destined to meet their deaths during the chaos of one of the most anti-Catholic persecutions to face the Church, the sisters imitated the manner of early Christian deaths through their piety and practice of singing of traditional hymns and offices as they went to greet their death.

The Carmelite monastery was founded in 1641 just an hour’s drive north of Paris and renowned for its fervor and religious practice. Its daughters would particularly practice and witness that fervor throughout the years of the French Revolution.

Among the first acts of the anti-Catholic Civil Constitution of the Clergy in 1790 were to force priests to swear fidelity to the civil government and outlaw religious life, though it would be two years before the sisters were finally stripped of their ability to wear habits and pray in common inside the monastery walls.

On the feast of the Exaltation of the Cross, Sept. 14, 1792, the cloistered Carmelites, vowed to enclosure and dedicated by religious consecration to the contemplation of heaven, re-entered a society torn asunder by the bloody chaos of the French Revolution.

They had already formulated their plan.

According to the record of events put down by Sister Marie de l’Incarnation, who was away during the time of the arrest and therefore not executed, during the Easter of 1792, the convent prioress Mother Teresa of St. Augustine suggested to the sisters an additional vow: to offer their lives in exchange for an end to the French Revolution and for the Catholic Church in France.

When the convent was disbanded in September after the government plundered and confiscated all Catholic churches in the vicinity, the sisters continued their religious life in hiding in a set of apartments within Paris for the next two years. The revolution grew steadily worse before the sisters would be discovered and given a chance to fulfill this vow.

Even cultural elements of Christianity were subjected to attack. The authorities changed the work week to 10 days, to eliminate any traces of Christianity within the culture, including the practice of Sunday rest.

The body of Voltaire, proclaimed the atheist’s patron saint during the Reign of Terror because of his vehement anti-Catholic and atheistic stances, was exhumed and paraded through the streets. Dictator Maximilien Robespierre, who oversaw much of the bloodshed, was also paraded through the streets and proclaimed a god inside the famous Notre Dame cathedral, repurposed as a temple dedicated to the goddess Reason.

In this climate in June of 1794 the sisters were arrested, put on trial, and condemned by the Committee of Public Safety for being counter-revolutionaries and religious fanatics. After 26 days in prison, on July 17, 1794, the 16 members of a Carmelite monastery in Compiègne were processed through an open prison cart down the streets of Paris to their death.

The journey took two hours. The constant harassment of the large crowd assembled to witness their fate and the difficulty of the horses to manage the crowd contributed to the length, in addition to the fact that, according to onlookers, the horses were spooked by the smell of the blood from weeks of executions.

On the way to the scaffold, the sisters sang hymns of praise, including the Miserere, the Salve Regina, and evening vespers among other prayers and songs. At the place of the execution the sisters sang both the Veni Creator Spiritus and the Te Deum, as was the custom at religious profession of vows, and afterwards the lone novice, Sister Constance, made her vows.

It was the spontaneous intonation of the Laudate Dominum by Sister Constance at the end on the scaffold, however, that was destined to fill the imagination of opera composers and novelists, though popularly portrayed in artistic depictions as the Salve Regina, Veni Creator Spiritus, or the Te Deum.

The definitive history, written in French and titled, “History of the Carmelite Nuns of Compiègne,” detailed the vow proposed by Mother Teresa of Saint Augustine and the manner of the executions.