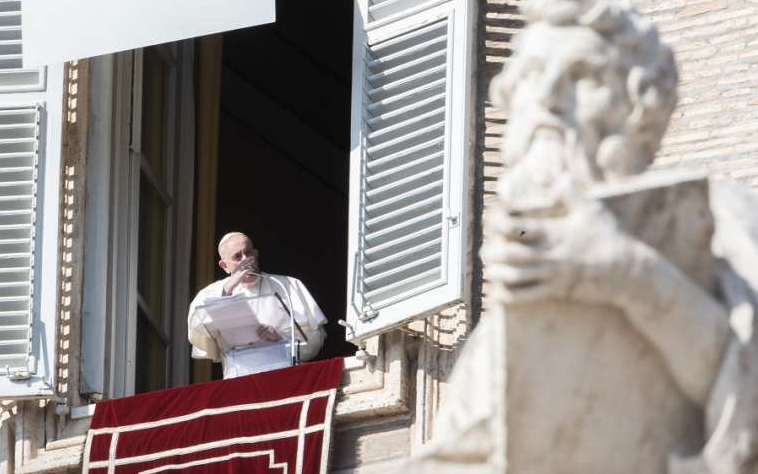 For the Solemity of All Saints, the Holy Father explained how holy men and women, though all unique, lived the beatitudes.

VATICAN CITY — On the Solemnity of All Saints, Pope Francis encouraged everyone to follow the model of the saints, who pursued virtue in contradiction to the ways of the world and thus give witness to Christian hope.

“Choosing purity, meekness and mercy; choosing to entrust oneself to the Lord in poverty of spirit and in affliction; dedicating oneself to justice and peace — all this means going against the current in respect to this world’s mentality, in respect to the culture of possessing, of meaningless fun, of arrogance against the weakest,” the Pope said Nov. 1.

This is the “evangelical path” taken by the saints and blesseds, he added.  Giving his Angelus address from a window overlooking St. Peter’s Square, Pope Francis reminded listeners of the Church’s Nov. 1 celebration of the Solemnity of All Saints.

The solemnity “reminds us of the personal and universal vocation to holiness and proposes sure models for this journey that each person walks in a unique way, an unrepeatable way,” he said.  He pointed to the saints’ uniqueness and to their “inexhaustible variety of gifts and real-life stories.”

The Pope focused his day’s reflection on the third beatitude proclaimed by Jesus in the Gospel: “Blessed are the meek, for they shall inherit the earth.”

“Meekness is characteristic of Jesus, who said of himself: ‘Learn from me, for I am meek and humble of heart,’” Francis said.  The meek, though not appreciated by the world, are “precious in God’s eyes,” he stated. “God gives them the promised land as an inheritance, that is, life eternal.”

According to the Pope, “at this moment in life, even in the world, there is so much aggressiveness; in everyday life as well, the first thing that comes out of us is aggression, defensiveness. We need meekness to progress on the path of holiness; to listen, to respect, not to attack: meekness.”

Pope Francis also drew attention to the second beatitude: “Blessed are those who mourn, for they shall be comforted.”  This seems contradictory, he said, because “mourning is not a sign of joy and happiness,” and he listed some of the reasons for mourning, such as “suffering and death, illness, moral adversity, sin and mistakes.”

Even everyday life, “marked by fragility, weakness and difficulties, a life at times wounded and pained by ingratitude and misunderstanding,” can be filled with sorrow, he said.  Jesus, Pope Francis said, is proclaiming blessed all those who trust in the Lord despite everything, who do not harden their hearts in response to pain, but “patiently hope for God’s comfort.”

He explained that the saints are “the most authoritative witnesses of Christian hope, because they lived it fully in their lives, amidst joys and sufferings, putting into practice the beatitudes that Jesus preached.”

Francis also pointed to the Virgin Mary, who is called the Queen of All Saints and who teaches everyone how to follow the example of her children the saints.

“May she help us nourish the desire for holiness, walking the way of the beatitudes,” he said.

After the Angelus, Pope Francis noted the beatification of Father Michael McGivney in Hartford, Connecticut, on Oct. 31.  “Dedicated to evangelization, he did everything possible to provide for the needs of those in need, promoting reciprocal aid. May his example be an impetus for us to always be witnesses of the Gospel of charity,” he said, asking for a round of applause for the new Blessed Michael McGivney.

The Pope asked for continued prayers for the victims of “tragic” clashes in Nagorno-Karabakh, where people continue to lose their lives, and homes and places of worship have been destroyed.  He said he is near to all who are suffering and invited everyone to ask the intercession of the saints for peace in that region.

The Pope also asked for prayers for victims of a recent earthquake in the area of the Aegean Sea.  He closed his weekly Angelus prayer and address by announcing he will say Mass in the Vatican’s Teutonic Cemetery on Nov. 2 for the suffrage of the deceased.

“I unite myself spiritually to those who, while observing the health regulations which are important, go to pray near the tombs of their dear ones in every part of the world,” Francis said.  “I wish all of you a happy feast in the spiritual company of the saints.”