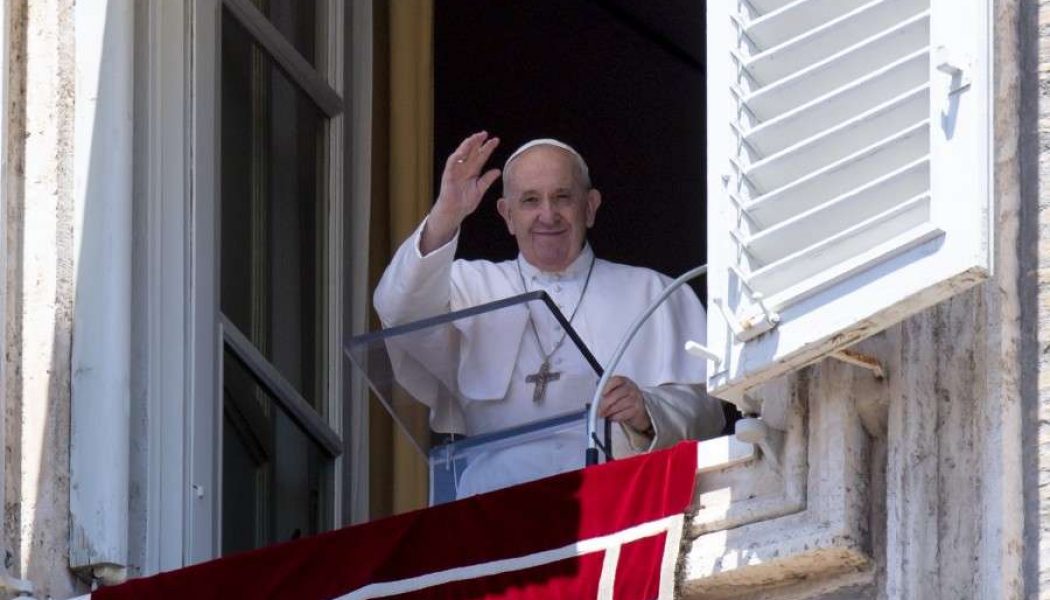 Speaking from a window overlooking St. Peter’s Square June 28, the pope reflected on the day’s Gospel reading, in which Jesus tells his disciples: “Whoever does not take up his cross and follow after me is not worthy of me” (Matthew 10:28).

“This means following Him along the path that He Himself trod, without looking for shortcuts,” he said, according to an unofficial translation provided by the Holy See Press Office.

“There is no true love without the cross, that is, without a personal price to pay. And many mothers, many fathers who sacrifice many things to their child, and bear true sacrifices, crosses, but because they love them.”

“And when borne with Jesus, the cross is not scary because He is always at our side to support us in the hour of the most difficult trial, to give us strength and courage.”

The pope began his address by reflecting on the “demanding request” of Jesus to his followers to place love for Him before family ties.

Commenting on the words “Whoever loves father or mother […] son or daughter more than me is not worthy of me” (Matthew 10:37), he said: “Jesus certainly does not intend to undervalue love for parents and children, but He knows that family bonds, if put in first place, can deviate from the true good.”

“We see this: some forms of corruption in governments come about precisely because love for the family is greater than love for one’s country, and so they place family members in office. The same with Jesus: when love is greater than Him, it is not good,” he explained.

The pope also reflected on another saying of Jesus in the same chapter of St. Matthew’s Gospel, “Whoever finds his life will lose it, and whoever loses his life for my sake will find it” (Matthew 10:39). He described it as “the Gospel paradox.”

“The fullness of life and joy is found by giving oneself for the Gospel and for others, through openness, welcoming and goodness.”

The pope recalled that Jesus also told his disciples that “Whoever gives only a cup of cold water to one of these little ones […] will surely not lose his reward” (Matthew 10:42).

“God’s generous gratitude takes into account even the smallest gesture of love and service given to our brothers and sisters,” he said.

“Again in these days, I heard from a priest who was moved because in his parish a child came up to him and said, ‘Father, these are my savings; not very much. They are for the poor, for those who are in need because of the pandemic.’ A little thing, but a great thing. It is a contagious gratitude that helps every one of us to be grateful toward those who take care of our needs.”

He continued: “Gratitude, appreciation is, first of all, good manners, but it is also characteristic of a Christian. It is a simple but genuine sign of the kingdom of God which is the kingdom of gratuitous and grateful love.”

After reciting the Angelus, the pope noted that a European Union and United Nations conference on Syria will take place on Tuesday, June 30. The gathering will seek to generate financial support for the 11 million people in need of humanitarian help in the country and a further six million people displaced from Syria.

“Let us pray for this important meeting, so that it may improve the dramatic situation of the Syrian people and neighboring peoples, particularly Lebanon, in the context of serious socio-political and economic crises that have been made even more difficult by the pandemic.”

“Think of the fact that there are small children who are hungry, who do not have anything to eat. Please, may the leaders be capable of making peace,” the pope said.

He also called for prayers for Yemen, which is reeling from a five-year civil war, as well as the effects of the coronavirus pandemic. A UNICEF report this month predicted that there could be as many as 2.4 million Yemeni children facing starvation by the end of 2020, an increase of 20%.

The pope also urged Catholics to pray for victims of severe flooding in western Ukraine, which has affected more than 200 towns and villages.

Pope Francis noted that pilgrims gathered in the square below came not only from Rome and elsewhere in Italy, but also from other countries such as Poland and Germany. Pilgrims stood spaced apart, wearing face coverings, in order to prevent the spread of the coronavirus.

After asking for prayers and wishing pilgrims a good lunch, the pope noted that he would return Monday for the feast of Ss. Peter and Paul.

Waving to a group of pilgrims holding the national flag of the Democratic Republic of the Congo, the pope greeted those who had attended a Mass that morning in the Congolese rite in Rome.

“The Congolese people are wonderful,” he said.