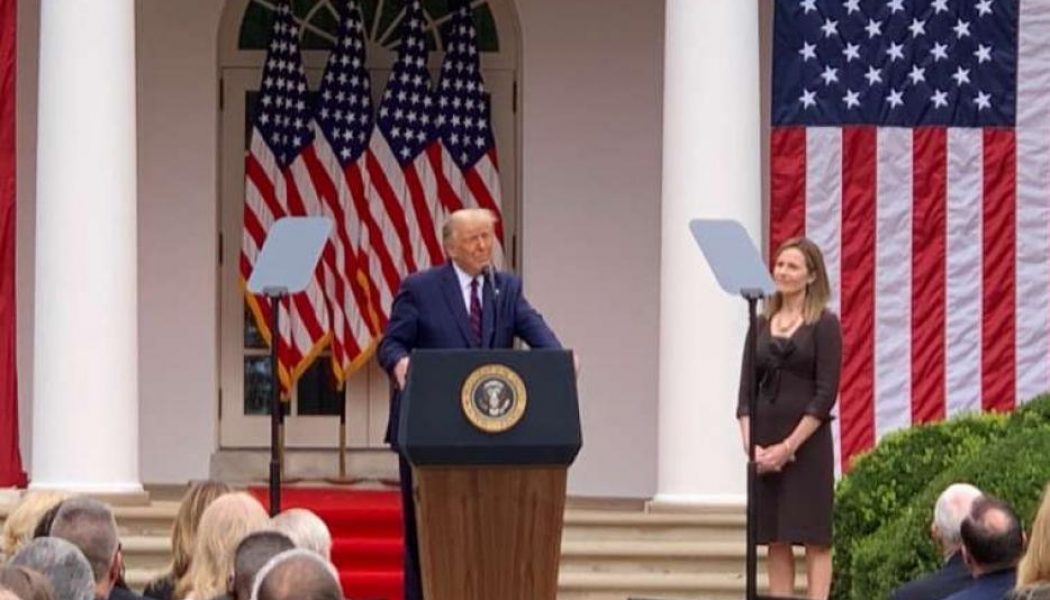 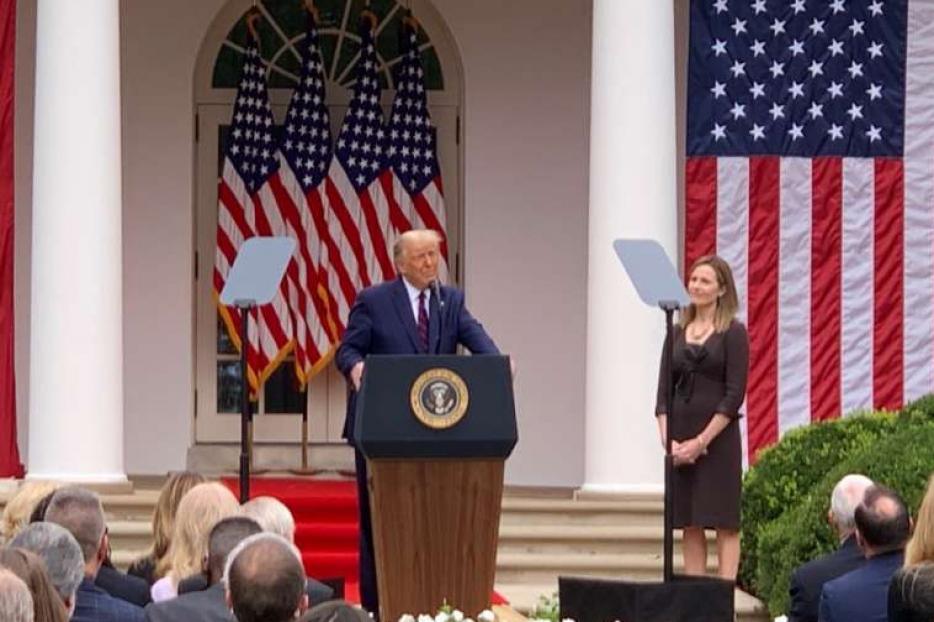 Speaking after the president, Barrett said she was “deeply honored” at by the nomination and called the moment a “rather overwhelming occasion.”

Trump presented Judge Barrett, a Catholic, September 26, at a press conference in the White House Rose Garden shortly after 5pm.

Presenting Barrett, Trump said the nomination of a Supreme Court justice is one of his “most important duties” as president.

“This is my third such nomination,” Trump said, “and it is a very proud moment indeed.”

“Today it my honor to nominate one of our nation’s most brilliant and gifted legal minds,” Trump said, paying tribute to Barrett as “a woman of unparalleled achievement, towering intellect, sterling credentials and unyielding loyalty to the constitution,” and “eminently qualified” for service on the nation’s highest court.

Speaking after the president, Barrett said she was “deeply honored” at by the nomination and called the moment a “rather overwhelming occasion.”

“I pledge to discharge the responsibilities of this job to the very best of my abilities,” she promised. “I am truly humbled by the prospect of serving on the Supreme Court.”

Trump also paid Trump paid tribute to Justice Ginsburg, saying “the nation mourned the loss” of a “legal giant and a pioneer for women.”

Barrett also paid tribute to Ginsburg in her own remarks, noting that the Justice “began her career at time when women were not welcome in the legal profession,” and “smashed glass ceilings” to lead a life of “enormous talent and consequence.”

The judge was presented by the president Saturday evening, where she was joined by members of her family as well as colleagues from the law school at the University of Notre Dame.

Barrett, 48, currently serves on the United States Court of Appeals for the Seventh Circuit, a position to which Trump nominated her in 2017.

Senate majority leader Mitch McConnell said earlier this week that “the Senate will vote on this nomination this year,” but has not specified if he expects the vote to occur before or after the November election.

Born in New Orleans, the eldest of seven children, Barrett graduated from Rhodes College before receiving a full scholarship to Notre Dame Law School where she graduated first in her class.

Barrett went on to clerk for Judge Laurence Silberman and Supreme Court Justice Antonin Scalia, before going into private practice. She returned to Notre Dame Law School and taught classes in 2002 before becoming a professor in 2010.

Barrett’s selection was widely anticipated, with many media outlets touting her as the leading candidate for the nomination. She has already faced concerted media scrutiny and criticism for her Catholic faith.

During her 2017 nomination hearing, Sen. Dianne Feinstein (D-CA) questioned her on her personal faith and values, saying that “when you read your speeches, the conclusion one draws is that the dogma lives loudly within you. And that’s of concern.”

Barrett and her husband have seven children, including two adopted from Haiti. In a 2019 interview at a Notre Dame alumni event in Washington, DC, Barrett said that raising children is “where you have your greatest impact on the world” and that she could imagine no greater thing. In anticipation of her nomination, in recent days media criticism has also turned to the size of the judge’s family

During Barrett’s confirmation hearings, questions were also raised about Barrett’s association with the lay organization People of Praise.

People of Praise has been referred to in the media as a “cult,” and criticized for a practice, which has since been changed, that called leaders “heads” and “handmaidens”–both of which are references to Biblical passages.

People of Praise was founded in 1971 as part of a “great emergence of lay ministries and lay movements in the Catholic Church,” following Vatican Council II, Bishop Peter Smith, a member of the organization, told CNA.

The group began with 29 members who formed a “covenant”- an agreement, not an oath, to follow common principles, to give five percent of annual income to the group, and to meet regularly for spiritual, social, and service projects.