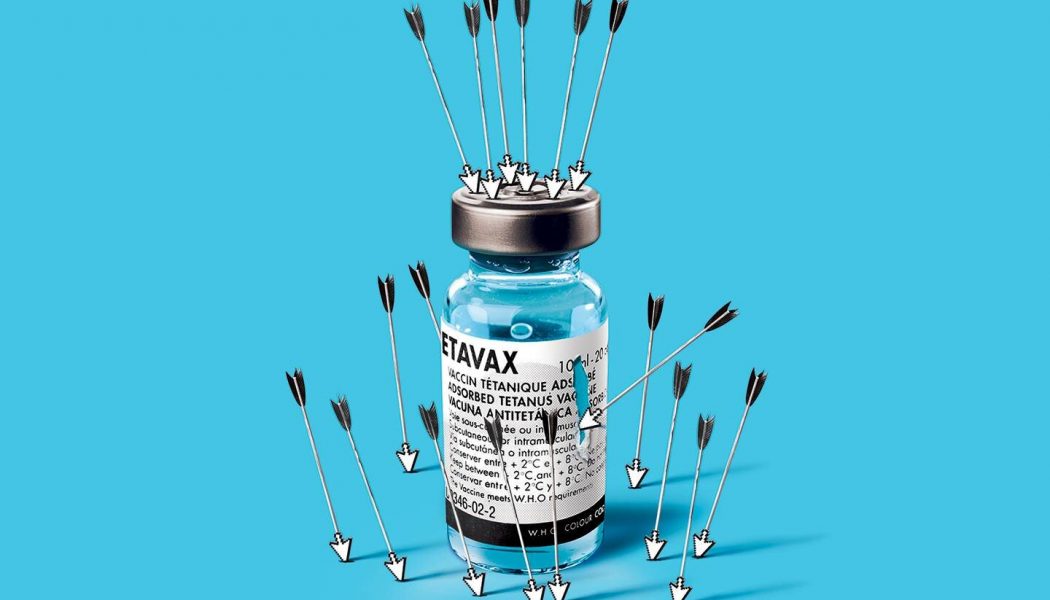 Once again, it’s time for some time travel on the religion beat — as we ponder the current state of news coverage about the COVID-19 mask-and-vaccine wars.

Think back to Easter a year ago. Church leaders were wrestling with the real possibility that they would not be able to worship during Holy Week and on the holiest day on the Christian calendar. This was got lots of ink from the press, with good cause. There appeared to be two camps: (1) Crazy right-wingers (many journalists saw Donald Trump looming in the background) who wanted face-to-face worship at any cost and then (2) sensible, sane clergy willing to move to online worship and leave it at that.

The reality was more complex, especially since some (not all) government leaders seemed to think that worship was more dangerous than other forms of public life. During this week’s “Crossroads” podcast (click here to tune that in), host Todd Wilken and I discussed how it’s easy to see the same patterns in news reports on bitter battles over COVID-19 vaccines. For some on the left — see this fascinating Emma Green piece at The Atlantic — super-strict coronavirus rules have evolved into faith-based dogma.

Now for that early COVID-19 flashback. In a post and podcast a year ago, I argued that this wasn’t really a simplistic story about two groups (good churches vs. bad churches), but one in which there were at least five camps to cover:

Those five camps? They are (1) the 99% of religious leaders who cooperated and took worship online, (2) some religious leaders who (think drive-in worship or drive-thru confessions) who tried to create activities that followed [government] social-distancing standards, (3) a few preachers who rebelled, period, (4) lots of government leaders who established logical laws and tried to be consistent with sacred and secular activities and (5) some politicians who seemed to think drive-in religious events were more dangerous than their secular counterparts.

Say what? … Why were drive-in worship services — with, oh, 100 cars containing people in a big space — more dangerous than businesses and food pantry efforts that produced, well, several hundred cars in a parking lot?

These five camps still exist and we can see them in the vaccine wars.

Consider this passage from the Atlantic. Which of my five camps might this represent, especially if these people hold government jobs or lead schools?

Lurking among the jubilant americans venturing back out to bars and planning their summer-wedding travel is a different group: liberals who aren’t quite ready to let go of pandemic restrictions. For this subset, diligence against COVID-19 remains an expression of political identity — even when that means overestimating the disease’s risks or setting limits far more strict than what public-health guidelines permit. In surveys, Democrats express more worry about the pandemic than Republicans do. People who describe themselves as “very liberal” are distinctly anxious.

A while ago, I started noticing something strange: Very progressive people, who love to talk about &quot;believing in science,&quot; were adopting COVID restrictions *over and above* CDC guidelines. I thought, is there a story here? And, well, wow, there is. https://t.co/tasiSw73Dy

A while ago, I started noticing something strange: Very progressive people, who love to talk about “believing in science,” were adopting COVID restrictions *over and above* CDC guidelines. I thought, is there a story here? And, well, wow, there is. https://t.co/tasiSw73Dy

Now, it’s true that Green stresses debates linked to “political” identity. However, in post-Donald Trump America it’s hard to talk about political issues of this kind without encountering religion ghosts. As we will see, many journalists remain convinced that those science-denying &%# @$^&+* White evangelicals (or maybe Latino evangelicals) are the ultimate bad guys. Hold that thought.

But back to “politics.”

For many progressives, extreme vigilance was in part about opposing Donald Trump. Some of this reaction was born of deeply felt frustration with how he handled the pandemic. It could also be knee-jerk. “If he said, ‘Keep schools open,’ then, well, we’re going to do everything in our power to keep schools closed,” Monica Gandhi, a professor of medicine at UC San Francisco, told me.

Later, there is this blunt passage.

The spring of 2021 is different from the spring of 2020, though. Scientists know a lot more about how COVID-19 spreads — and how it doesn’t. Public-health advice is shifting. But some progressives have not updated their behavior based on the new information. …

Scientists, academics, and writers who have argued that some very low-risk activities are worth doing as vaccination rates rise — even if the risk of exposure is not zero—have faced intense backlash. After Emily Oster, an economist at Brown University, argued in The Atlantic in March that families should plan to take their kids on trips and see friends and relatives this summer, a reader sent an email to her supervisors at the university suggesting that Oster be promoted to a leadership role in the field of “genocide encouragement.”

On the other side there are the anti-science folks in pews. They are, of course, out there and it’s clear that debates have been fierce in many religious congregations and even denominations.

So how many “evangelicals” and other conservative Christians are refusing to get their vaccine shots? Raise your hand if you find the following passage from a new Washington Post scare story — “Officials grapple with coronavirus vaccine hesitancy among Latino evangelicals” — to be illuminating, but not for the reason the story’s creators intended.

Skepticism appears to be relatively high among evangelicals in general. More than 3 in 10 self-identified evangelical or born-again Christians say they will probably or definitely not get the vaccine, compared with just over 2 in 10 Americans who are not evangelical, according to a Washington Post-ABC News poll last month.

Say what? Uh, 30% of “evangelicals” — the story actually focuses more on independent charismatics and Pentecostals — “probably or definitely” won’t get their shots?

That’s all? What slice of that 30% falls into the “definitely” category?

Meanwhile, The New York Times ventured into my own neck of the woods in an effort to find out why all of those white Christians in rural America are sure that God doesn’t want them to get vaccinated. The headline: “Faith, Freedom, Fear: Rural America’s Covid Vaccine Skeptics.” Here is a crucial chunk of that report (with great photos, by the way):

As the beautiful Appalachian spring unfurls across northeastern Tennessee, the Covid-19 vaccine is tearing apart friends, families, congregations, colleagues. “It’s a muddy mess,” said Meredith Shrader, a physician assistant, who runs an events venue with her husband, another pastor, and who notes that the choice has become about much more than health care. “Which voice do you listen to?”

Communities like Greeneville and its surroundings — rural, overwhelmingly Republican, deeply Christian, 95 percent white — are on the radar of President Biden and American health officials, as efforts to vaccinate most of the U.S. population enters a critical phase. These are the places where polls show resistance to the vaccine is most entrenched. While campaigns aimed at convincing Black and Latino urban communities to set aside their vaccine mistrust have made striking gains, towns like these will also have to be convinced if the country is to achieve widespread immunity.

Let me be clear: The contents of this story — this is a compliment — are more complex than the framing headline. Whether they realize it or not, this piece demonstrates that most mainstream churches (Southern Baptists, for example) are DIVIDED by these debates, not UNITED in opposition. Once again, the strongest opposition to the vaccines appears to be centered in smaller, mostly independent flocks.

It also appears that there are cultural factors in play that are more important than mere politics. Consider this paragraph in the summary, thesis section of this long feature:

… [A] week here in Greene County reveals a more nuanced, layered hesitancy than surveys suggest. People say that politics isn’t the leading driver of their vaccine attitudes. The most common reason for their apprehension is fear — that the vaccine was developed in haste, that long-term side effects are unknown. Their decisions are also entangled in a web of views about bodily autonomy, science and authority, plus a powerful regional, somewhat romanticized self-image: We don’t like outsiders messing in our business.

That story is worth reading.

Finally, what if there was evidence that there are Americans — other than the &%# @$^&+* White evangelicals — who are just as hesitant, or more hesitant — to get their vaccine shots?

Dig into the material in that Burge feature, or hang on until I will feature it as this weekend’s “think piece.”

Here is one taste, for now.

… When the sample is broken down into the three of the largest religious groups: White evangelicals, White Catholics and the religiously unaffiliated, some disparities begin to emerge. It’s noteworthy that White Christians were significantly more likely to get the vaccine than the general public between January and April. In the latest wave of the survey, nearly 60% of White Catholics had been vaccinated and just about half of White evangelicals said the same. It was the religious “nones” that were lagging far behind, with only 31% indicating that they had received one dose.

Whoa. Have you read any of that information in the mainstream press? I didn’t think so.

Enjoy the podcast and, please, pass it on to others. You can, of course, subscribe to “Crossroads” at Apple Podcasts.