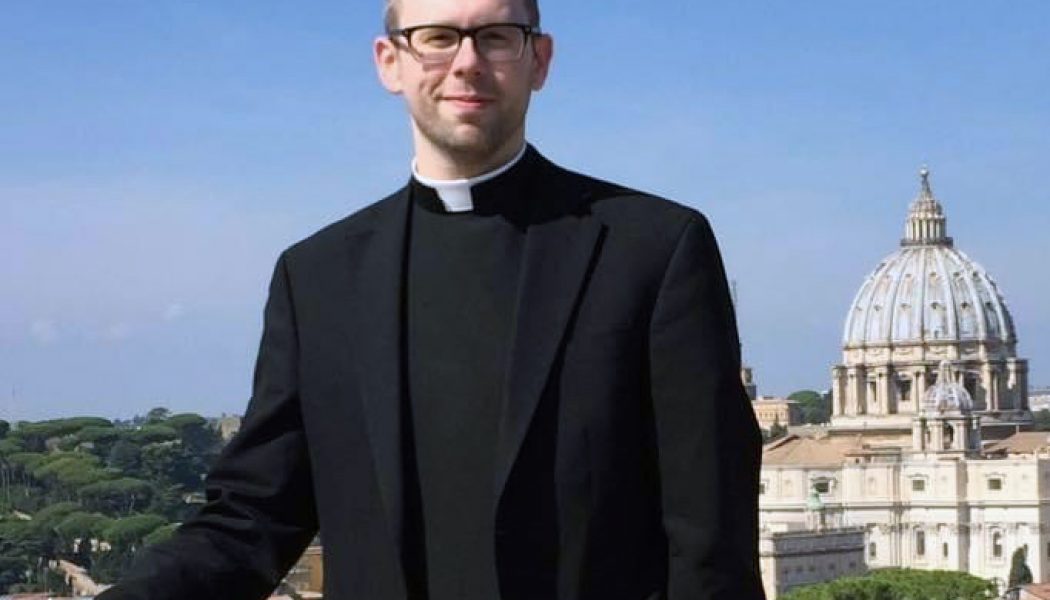 Father Adam Young, whose specialties include ‘ordering out and frozen pizza,’ was nominated for the Food Network show by his brother priests.

Fans of the Food Network cooking competition shows will likely remember the name and even the face of Father Adam Young, pastor of St. Paul Church in Cranston, Rhode Island. What makes that particular competition, judged by chefs Bobby Flay and Anna Burrell, so memorable is its title, “Worst Cooks in America.”

How Father Young ended up on the show is something of a parish tale. “It is a not a secret among family and friends,” he said, “that I cannot cook. I was watching television with a group of priests and the next morning, I got a phone call from the producer.” Note: As he noted, he had to send in a video of his cooking skills, and his entry showed him trying to carve up a roasted chicken. Apparently, this was something of a failure. His fellow priests had sent in an application for him to appear on the show.

As an invitee to the “Worst Cooks in America” show with this competition starting Aug. 4, 2019, Father Young joined 13 other people who had been deemed among the worst chefs. In America, “the first episode was titled ‘Date Night,’ he said. “So I just prepared a meal I would serve myself. It was a biblical-themed dish with lamb and pita bread.” He noted that the producers require that each contestant must improve in each episode, and the two who don’t get voted off after each episode.

Father Young said that contestants had to cook dishes that incorporated fish, chicken, and/or pasta, and with such challenges, he felt his cooking skills were gradually improving. “It was all very intense,” he said, “having celebrity chefs taste and critique our cooking. But I took away some tips, though I am still not very great. Before the show, my whole diet was ordering out and frozen pizza.”

Today, he feels a little more adventurous in the kitchen, and prepares soups, pastas and chicken dishes. “I live with another priest who cannot cook, so we do our best,” he said. “I do not want to cook and kill parishioners.”

Yes, he did learn cooking skills. But another element provided Father Young an unexpected benefit: “Another cool part about being on the show,” he said, “was I was getting to know the other contestants, and many had never seen a priest before. They were surprised to find that priests are normal people … at least, we got to know each other… And you never see a priest on a cooking contest.” He added that on Sundays, he would celebrate Mass in the hotel room.

Thinking about his post-cooking competitions, Father Young said he plans to develop his cooking skills. “Before then, I was intimidated and recipes seemed overwhelming,” he said. “Now I know I can mess up,” but, he added, he can move on. He said he may even end up in another cooking show.