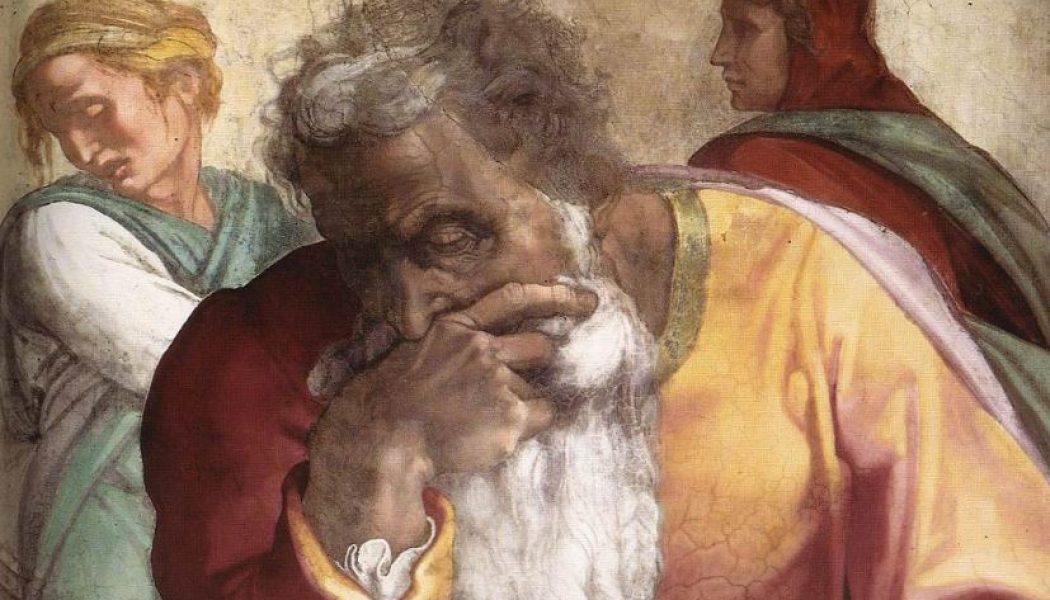 There is a silly notion that a prophet is someone, like Madame Sosostris-the famous clairvoyant, who has supernatural powers to foretell the future. This has come down to us, no doubt, from generations of Biblical teachers who showed how the Old Testament prophecies were fulfilled in Jesus. This is a superstitious understanding of prophecy.While it is true that the prophecies have come true, the Old Testament prophets were not old timey versions of Nostradamus. The prophets are simply men and women who can read the signs of the times and predict what will happen.

Jesus spoke this common sense, “When you a cloud rising in the West, you say ‘A storm is coming.’ Locked within this simple forecasting of events by reading the signs of the times are deeper signs and symbols of what will happen in the future. This comes from the fact that the prophets who are inspired by God are able to read the signs of the times very deeply and understand the pattern of God’s work in the world. Through this deeper insight and inspiration they are also able to predict, in general terms, what will take place in the future.

So, for example, the prophet Micah foretells that the Messiah will be born in Bethlehem.  In the context he is speaking to the political and religions crisis in Judea in his time. The town of Bethlehem was the city of David, and Micah is looking for a good king–a son of David who will rescue the people from their apostasy and danger of destruction. However, the prophecy from his time also has a future dimension which Micah could not have seen in detail, and that aspect of the prophecy is fulfilled in Jesus’ birth.

I say all that to say this: Rod Dreher’s new book Live Not By Lies – A Manual for Dissidents functions like a prophecy in our time. The book’s basic emphasis is, like the message of all prophets–“Wake up people. See what is happening all around you. Destruction is at hand.” Dreher’s book was published earlier this year. He warns that America is on the brink of “soft totalitarianism”. Drawing from the experience of people who lived though communism in Eastern Europe, Dreher says the increasing “woke” and cancel culture is a sign of the rise of intolerance and persecution. He begins by asking a question, “Have you ever felt you had to shut up and not speak your mind because you might get into trouble? Maybe it was just the trouble of a family argument over religion or politics, or maybe you kept quiet in the workplace because you knew your conservative opinions–no matter how balanced or mild mannered–would be attacked by your colleagues. Maybe you paused before you posted on Twitter or Facebook because you weren’t sure if your comment would cause a storm of aggression and anger.”

He starts off well. That got me thinking and he’s right. On Twitter over the last year I’ve posted jokes or tweets that were harmless, but readers jumped on them, misinterpreted them, assumed ill will on my part, shared them and provoked outrage amongst many others. I deleted the tweets, thinking that if they offended people it would be a good idea to take it down. No offense was intended, but if they took offense, delete it. But then taking the tweet down was perceived as an admission of guilt. Rather than defusing the furore, the wolves came down even more strongly. They copied the tweet and posted it elsewhere, stirring up yet more rage.

This type of behavior is frightening because it is so irrational. Dreher goes on to detail the growing threat of totalitarian political correctness. He charts the growth of big tech surveillance and refers back time and again to the experience of dissidents under communism. They tell us how they felt every conversation was overheard. Everyone was watched, Spies were everywhere. No one could be trusted. The entire establishment was part of it–the publishers, newspapers, radio and television were controlled by the state. The colleges and schools were state run. If you wanted to keep your job and feed your family you learned to shut up. Dreher rightly points out that this is a network of lies.

I have written about the “people of the lie” and the inner dynamic of deceit in Immortal Combat and the things I observed there echo through Rod’s prophetic account. The fact that this year has brought about a disastrous presidential election is something Dreher could not have predicted precisely, but the results of the election have swept in Rod’s warnings big time as a fulfillment of his prophecies. No matter what you believe about the legality of Joe Biden’s election, the fact remains that half the country believe Donald Trump and his Trump army were planning a coup. The other half of the country believe Joe Biden accomplished a coup through a rigged election.

Again, no matter what the facts are–the result is that the Joe Biden presidency appears to be propped up by military might. Calling up 25,000 troops to Washington this week was not just for “security”. It was clearly a show of strength by the winning side. It was a display of military might to remind the other half of America who won and who is in charge. Rod Dreher’s prophecy of a soft totalitarianism was perhaps too tame. Soft totalitarianism is a subtle, creeping control of the powers that be. The military display in Washington wasn’t creeping. It was creepy. Suddenly the soft totalitarianism seems to be hardening.

In the second half of the book Dreher recalls the experience of dissidents in communist Eastern Europe. The bottom line is to resist lies and insist on speaking and living the truth no matter what the cost. In the chapter “Cultivating Cultural Memory” Dreher give the very important reminder that totalitarian regimes will always seek not only to communicate news as propaganda, but they will also always seek to re-write history in order to change the memory of the culture and wipe out values that are antithetical to their system.  Finally he gives the strong encouragement that family and faith are the bedrock of resistance. There is no room for organized violence or zealous plots to overthrow governments. Instead to be a dissident is simply to follow one’s faith and live a life according to the truths revealed in religion. To live a quiet life, teaching the faith and living the faith even in troubled times–especially in troubled times!

One of the main ministries of the prophet is not to foretell the future, but to speak to the present. The prophets see the wickedness, apostasy and corruption and speak plainly to the problem calling for repentance lest God’s judgement fall on a nation or church. Ralph Martin steps up here as another prophet in our times. If Rod Dreher speaks to the wider political and cultural moment, Ralph Martin, in A Church in Crisis takes the story to the Catholic Church, and if he is a prophet, he is Jeremiah–the no compromise speaker of truth to power.

Martin plunges into the current doctrinal confusion and ambiguity of the Francis pontificate, he questions the compromises on sexual morality, financial corruption and the betrayal of the gospel through modernism and especially the sentimental lie of universalism. What is good about Martin’s approach is his stable, balanced tone. He criticizes the Catholic powers that be, but he also recognizes their good intent and their positive accomplishments. Martin believes things are very bad indeed, but he avoids the sensationalism, gossip and conspiracy theory paranoia evidenced by other conservative Catholic voices.

Conspiracy theories? There is not need to theorize about conspiracies when the conspirators are stating their agenda and plans openly. There is no conspiracy when all the propaganda and the whole establishment are working together for a particular outcome. The heresy, corruption, graft, lies, nepotism and double dealing in the church and society are open and obvious.

Ralph Martin pulls no punches and as a genuine prophet offers only one solution: repentance. He notes the corruption, decadence, affluence and heresy in the Catholic Church and does not blame only the members of the hierarchy, but also the people in the pew for their complacency and lack of vital faith. He sees the decline of the Catholic Church in the West and says we only have ourselves to blame. We have compromised with the world, betrayed the gospel, served worldly power and money, kissed the power brokers of this world and basically sold Jesus for the top dollar. The cover of Martin’s book shows Notre Dame cathedral in flames, and this image is a suitable sign of God’s coming judgement on the church.

Ralph Martin calls on many of the same actions as Dreher. This is a time for Christians to live and speak the historic Christian faith. The remnant of truly faithful Christians should be clear sighted and clear minded. We should not give in to wild conspiracy theories and fear persecution. Instead we should roll up our sleeves, live out the gospel and build families and churches that are faithful to the gospel. This is where Dreher’s earlier book The Benedict Option helps. He reminds us of the witness of St Benedict who–in the face of a declining and decadent culture–withdrew to build solid stable communities rooted in tradition, grounded in study, prayer and work. This is the rock on which we stand in a tsunami world.

Dreher’s book is crisp and well written. Martin’s book is passionate and well researched, but could have used a good editor. It is sometimes overly wordy and repetitive. Nevertheless, both books make for sobering reading, and as the crisis in America and the Catholic Church continues to deepen, both books should serve to give the faithful new outlooks and new positive actions on the way forward in the new decade of the 2020s.