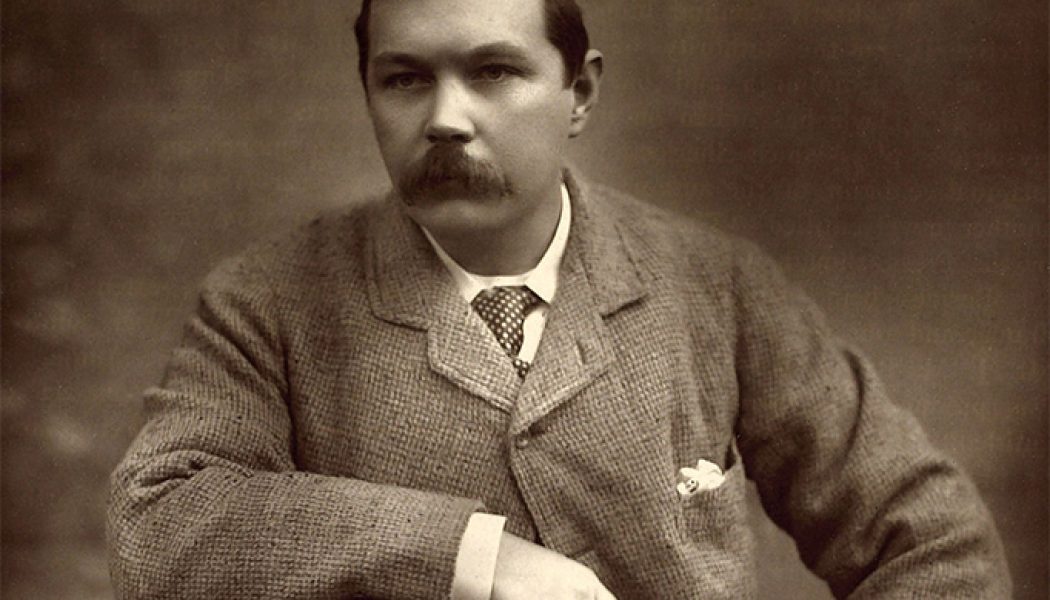 Sherlock Holmes creator Arthur Conan Doyle was brought up a Catholic, but in his young adulthood, he rejected the faith of his ancestors and slipped into the dangerous world of the occult.

The unmistakable features of Sir Arthur Conan Doyle looked down upon me from an impressive Victorian town house. Below a larger than life portrait there was a sign; it announced: “The Sir Arthur Conan Doyle Centre.” I made a mental note, intending to visit what I assumed was a place dedicated to the memory and literary legacy of the creator of one of literature’s most famous figures: Sherlock Holmes. It was then that I noticed another sign. It offered “services” and other activities: the building was a center for spiritualism — necromancy by another name. Standing there beneath the gaze of Conan Doyle, I knew then that I could never enter such a place. And with that, my heart sank, for it was then I remembered a fellow Catholic, a great writer, driven by grief to seek refuge in such dangerous falsehood.

In 1935, G.K. Chesterton wrote an essay entitled, Sherlock Holmes the God. In it he stated the following about the cult then developing around Doyle’s fictional detective: “It is getting beyond a joke. The hobby is hardening into a delusion. … The real inference is that Sherlock Holmes really existed and that Conan Doyle never existed. If posterity only reads these latter books, it will certainly suppose them to be serious. It will imagine that Sherlock Holmes as a man. But he was not; he was only a god.”

There is only one God, however, and all others masquerading as such are but imaginary “gods” or, perhaps, worse. Right on so many things, and especially on the unforeseen consequences of worshiping other “gods,” of whatever hue, Chesterton knew that such dalliances could end in tragedy.

The Jesuit-educated, Hiberno-Scot, Conan Doyle had been brought up a Catholic. But he had rejected the faith of his ancestors in his young adulthood preferring instead the certainties of science and, ominously, various aspects of the very uncertain world of the occult.

The character Sherlock Holmes had first appeared in 1887. Immediately, his popularity made his creator a well-known and wealthy literary celebrity. By the early 1890s, however, Conan Doyle was finding churning out plot twists and devices tedious — as tedious as the character he had created had now become to him. Moreover, he feared that the Holmes detective stories were eclipsing his attempts at more serious literary endeavors. Conan Doyle was to spend years researching historical novels, convinced that they would at last earn him the respect of the literary world. What he found instead was that all his efforts were obscured by the detection fiction centered in 221B Baker Street. Try as he might, Conan Doyle just couldn’t escape the shadow cast by Sherlock Holmes.

It was not only the writer’s art that was suffering, though. As Chesterton had implied in his essay “Sherlock the God,” it was as if Holmes had taken on a life of his own. Increasingly, Conan Doyle was dismayed by the seeming paradox of his success: in the minds of readers, the more real Holmes became, the less the author seemed to exist, or matter. In the end, Conan Doyle realized he had no choice: to live once more, he had to kill his creation.

In December 1893, six years after the first Holmes story had appeared, The Final Problem was published. It remains unique among the stories. Unlike the others, there was no problem to be solved, no helpless individual wrongly accused, no clues, no neat denouement. This was something different — more reminiscent of Mary Shelley’s Frankenstein than a Sherlock Holmes detective story. On this occasion it was not Victor Frankenstein tracking down his monstrous creation but Conan Doyle. Ostensibly pursued by Professor Moriarty, Holmes was being hunted down by the man who had given him literary life.

As news of Holmes’ “death” at the Reichenbach Falls broke across the world, it produced a numbed shock, followed, for some, by mourning. Conan Doyle, by contrast, felt only relief, glee even — he was free at last. Or, so he thought.

For, as we know, Holmes, was not to “die,” or, shall we say, he could not be killed. Instead, he rose from the Reichenbach Falls stronger than ever, triumphant even. Within a few years, and more than ever a prisoner to his creation, Conan Doyle was once again writing detective tales and was cursed to do so until the day he died.

There were to be no further attempts at escape. Locked into a reality he detested, Conan Doyle began earnestly to search elsewhere for a release. Sadly, the Scot did not look to his discarded Catholic faith, but instead found himself turning back to the darkness that had intrigued him as a younger man.

Conan Doyle, unable to finish off his Nemesis, and forced perpetually to pay homage to Holmes, Conan Doyle went “off with the fairies.” In 1917, two English girls declared they had photographs that they purported to be of “fairies.” At the time few believed the girls’ claims; Conan Doyle did, however. Later, on the back of their claims, he was to publish a book entitled The Coming of the Fairies. As has been said, when one stops believing in God it’s not that one believes in nothing but rather that one believes in anything. Increasingly, it was into this void that Conan Doyle now stepped.

The loss of his son through illness after fighting in the Great War greatly affected Conan Doyle. His turning to Spiritualism was to seek a source of solace, but that was to prove as misguided as it was ultimately futile. Nevertheless, from 1918 onwards, books and bookshops, lectures and lecture tours were to follow, as Conan Doyle became the “Saint Paul of Spiritualism.” From then on, he was to expend more energy on this newfound belief in Spiritualism than on anything else. As a result, by the time of his death in 1930, his reputation lay in tatters.

The Catechism of the Catholic Church makes it clear “all forms of divination are to be rejected.” This includes: “conjuring up the dead or other practices falsely supposed to ‘unveil’ the future. Consulting horoscopes, astrology, palm reading, interpretation of omens and lots, the phenomena of clairvoyance, and recourse to mediums.” Such practices “contradict the honor, respect, and loving fear that we owe to God alone.”

Walking on through the rain-soaked Edinburgh streets, I could only but reflect that Conan Doyle had exchanged his Catholic faith for the mesmerizing falsehood of Spiritualism, a treasure for a tawdry counterfeit, truth for a lie.