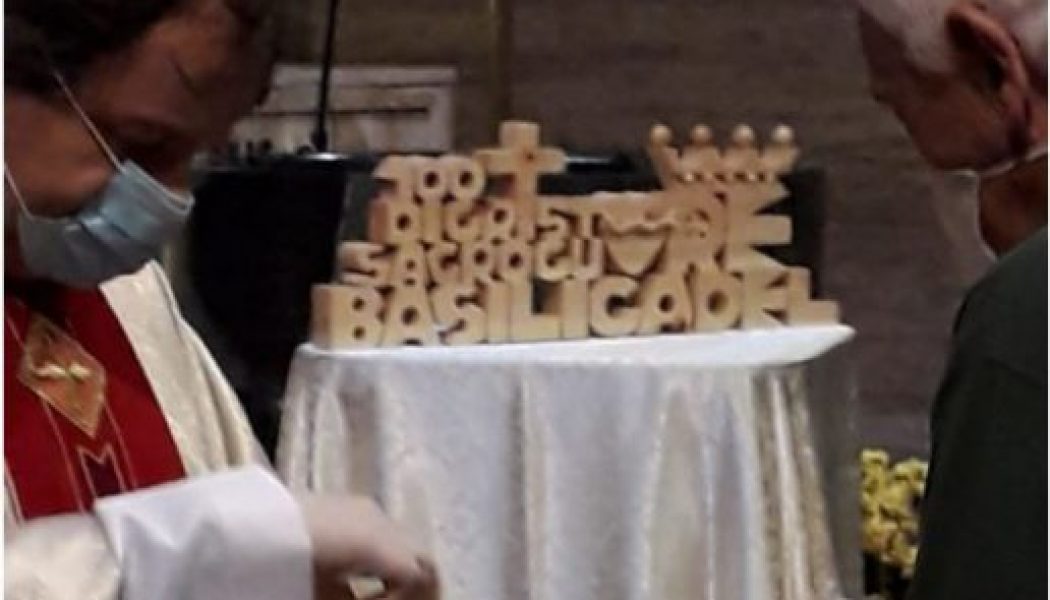 ROME – Yesterday, my wife and I did something we, along with most people in Rome, haven’t been able to do since March 8: We went to Mass. (We also went out to lunch for the first time in two months and ten days, enjoying a gorgeous Roman spring day and a fine meal, but that’s a story for another time.)

Herewith, a few sights and sounds from the “new normal” on the first day the Church both in Italy and the Vatican began to exit the coronavirus catacombs.

A Patchwork of Practices

Up and down Italy, mostly small pockets of Catholics attended Mass at one of the country’s more than 26,000 Catholic parishes Monday – small in part because it wasn’t Sunday, and in part, too, because some people may have been scared off by fears of long lines, stringent controls and the still-present danger of the disease.

Those who did show up were treated to a patchwork of precautions and new practices.

When we entered, a large bottle of hand sanitizer was positioned in the back of the church – in effect, it’s the post-coronavirus version of holy water, since everyone’s expected to take some as they come in. There were signs indicating where people are permitted to sit, on pews that had been repositioned to ensure the minimum meter and a half of distance. Everyone in attendance had masks, with the exception of the vocalist who sang during the liturgy, but gloves were hit and miss.

In theory, the basilica, designed by Italian architect Marcello Piacentini, a doyen of rationalism who was a favorite of Mussolini during the Fascist period, can accommodate 4,000 people, but the pastor, Dehonian Father Albino Marinolli, explained that under the terms of the protocol between church and state, they’re now limited to 200. That wasn’t an issue Monday, he said, but likely will be next Sunday.

Our celebrant, Dehonian Father Marco Grandi, wore a mask during the Mass, though most of the time it was hanging beneath his mouth so he could he heard. He had a bottle of hand sanitizer on the altar and applied it before beginning the Liturgy of the Eucharist.

Before distributing communion, Grandi applied a glove to his right hand, which he used to distribute the hosts. (There was a comic moment in which communion was delayed because a string on Grandi’s mask broke, and he and Marinolli desperately tried to fix it until a man produced a fresh mask from his personal stash and handed it to Grandi.)

Dehonian Father Marco Grandi administers communion at the Basilica of the Sacred Heart of Christ the King on Monday, May 18. (Credit: Crux/John Allen.)

Traditionalist parishes reportedly still distributed communion on the tongue, though in some cases with the priest applying sanitizer to his hands between recipients. Most places stuck to the communion in the hand rule, though practice varied in terms of whether the priest wears a mask and gloves.

A few places apparently even resurrected the old practice of “Eucharistic tweezers,” meaning a small tweezer-like grip with which the priest places a consecrated host in the hands of the recipient. Its use is attested to in the Liber de caeremoniis Sanctae Romanae Ecclesiae in the second half of the 14th century, and it’s most associated with outbreaks of leprosy and plague.

An example of “Eucharistic tweezers,” in this case supplied by the Italian company Desta specializing in liturgical objects and vestments. (Credit: Image courtesy Desta.)

How things proceed from here may be heavily dependent on the police response – our pastor, Marinolli, told us officers had already been by the parish to check on compliance with government mandates, and are likely to be out in force on Sunday.

Part of what may have prompted Italians to scrupulosity about anti-infection protocols was Pope Francis, who used his noontime address on Sunday to urge compliance.

“In Italy, starting tomorrow Mass with the people can be celebrated,” he said during his Regina Coeli remarks. “Please, let’s follow the norms, the prescriptions they give us, to protect everyone’s health.”

It did not escape attention that Francis himself didn’t quite follow suit in his public Mass Monday, held in St. Peter’s Basilica before the tomb of St. John Paul II to mark the centenary of his predecessor’s birth.

He celebrated without a mask or gloves and the liturgy was accompanied by a choir made up of religious sisters, while in Italy choirs are prohibited as part of the reopening.

The pope’s concelebrants – including Polish Cardinal Konrad Krajewski, the papal almoner; Italian Cardinal Angelo Comastri, head of the administration of St. Peter’s Basilica; Polish Archbishop Jan Romeo Pawłowski, the pope’s delegate to the Vatican’s diplomatic missions; and Italian Archbishop Piero Marini, who served as John Paul’s Master of Ceremonies – weren’t wearing masks or gloves either. The small crowed was a mixed bag, with some wearing masks and others not, though all were spaced out in the seats to maintain the recommended distance.

Pope Francis celebrates a Mass for the 100th anniversary of the birth of Pope John Paul II, in St. Peter’s Basilica, at the Vatican Monday, May 18, 2020. The Pope held the morning mass in the chapel where is located the grave of John Paul II. (Credit: Vatican Media via AP.)

For the record, the pope also did not apply hand sanitizer before the Eucharistic rite. During Masses celebrated at various altars and side chapels in St. Peter’s Monday afterwards, most priests did not appear to be wearing masks or gloves, even during the distribution of communion, though most attendees did. People coming in had to pass a thermoscanner confirming they weren’t running a fever.

The discrepancies between the Italian rules and Vatican practice sparked a vigorous online discussion, with defenders of the pontiff pointing out the Vatican is a sovereign state and isn’t obliged to follow any other country’s decrees, while critics charged Francis with incoherence in counseling Italians to follow the rules and then ignoring portions of them himself.

Actually, Pope Francis has never been glimpsed wearing a mask or gloves since the beginning of the pandemic, and visitors either to his residence at the Vatican’s Casa Santa Marta or the papal apartments in the Apostolic Palace haven’t been required to wear them either – though hand sanitizer has been offered to guests before and after their encounters.

As with so many things, whether that’s a reasonable judgment given the highly controlled environment around the pope, or a classic case of “do as I say, not as I do,” probably rests in the eye of the beholder.