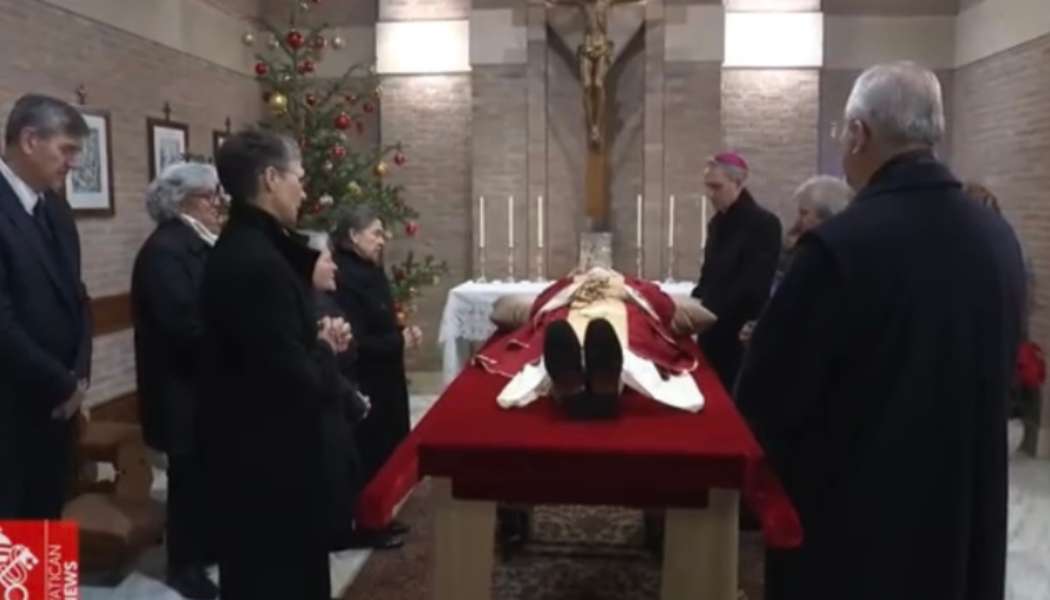 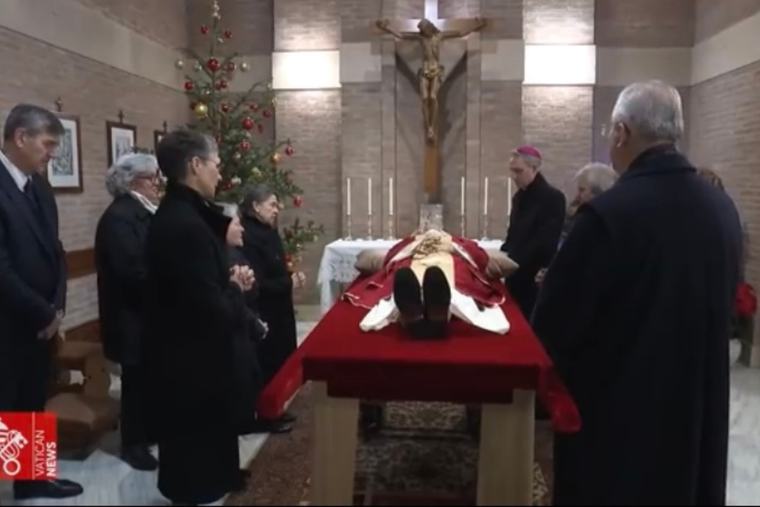 It was one last family walk in the garden.

Benedict XVI’s family accompanied him down the hill from the Mater Ecclesiae residence to St. Peter’s Basilica Jan.2, just as they had often walked with him in the same Vatican Gardens during his pontificate and in his retirement, often praying the Rosary in the afternoons.

Viewers may have wondered who the five women were who gathered around Benedict’s mortal remains in the chapel and then followed him to the basilica. They are who Benedict called his “family”: his secretary, Birgit Wansin, notable for being one of the few people able to decipher Benedict’s tiny handwriting; and the four consecrated laywomen of Memores Domini, Cristina, Carmella, Loredana and Rosella.

The Memores Domini, members of Communion and Liberation, formed a household with Archbishop Georg Gänswein, Benedict’s personal secretary during the papacy and afterwards.

The Memores Domini consecrated women were models of discretion. Never did they draw any attention to themselves. Indeed, when one of their number, Manuela Camagni, was hit by a car and killed in 2010, the grief of Benedict and the other members of the household was the first occasion many had even heard of them.

Decisions about his household reveal a lot about a prelate. Historically, the papal household was staffed by religious sisters, but more in the manner of domestic servants than family members. St. John Paul II modified that, bringing to Rome the same Polish sisters who looked after his household in Krakow. Together with his lifetime secretary, Msgr. (later Cardinal) Stanislaw Dziwisz, the household grew very close. Polish family customs provided the rhythm of life in the household.

Cardinal Joseph Ratzinger was different. He had only been an archbishop for less than five years when he came to Rome. His “household” as a professor, which continued when he came to Rome, was his blood sister, Maria, who never married and devoted her life to the support of her extraordinary brother. Indeed, Ratzinger’s retirement plan was to return to Germany, where he had a house where they would live with his older brother, also a priest, Georg, the three of them together. When Maria died in 1991, it was a devastating loss for Ratzinger.

One might have thought, given the caricature of Benedict as a hidebound traditionalist, that he would have chosen to be waited upon by a convent of Tridentine habited nuns, chanting the Divine Office in Latin at all hours of the day and night. Yet Ratzinger preferred a family dynamic and so sought out something that would provide that for him.

Benedict thus chose consecrated women from the new Church movements, which were central to Ratzinger’s life. When in the 1970s he and others launched Communio, the important theological journal, the Italian edition was not entrusted to the academic guild, but to bright theologians from Communion and Liberation, the future Cardinal Angelo Scola among them.

He sought a real community with the consecrated women, sharing common meals and, above all, worship.

In his interview book Light of the World, Benedict described his family life:

“We celebrate Christmas together, listen to the holiday music, and exchange gifts. The feast days of our patron saints are celebrated, and occasionally we also sing Evening Prayer together. So we celebrate feasts together. And then, besides our common meals, there is above all Holy Mass in common in the morning. That is an especially important moment in which we are all with each other in a particularly intense way in the light of the Lord.”

The choice revealed a key aspect of Ratzinger/Benedict’s pastoral approach. While he sought to preserve the truths of revelation, he had little interest in preserving ecclesial institutions for their own sake. In the new movements, Ratzinger saw a freshness and zeal that the older bureaucracies had lost.

“Here was something nobody had planned on,” Cardinal Ratzinger said in 1998. “The Holy Spirit had, so to say, spoken up for himself again.”

Hence the novelty of entrusting the household to the Memores Domini of Communion and Liberation: The Holy Father would join their weekly “school of community” meetings, where the Church’s most learned theologian and gifted preacher would listen attentively to the reflections of the women of his household. His participation in the spiritual devotions of his household family is not only evidence of his unusual humility, but also an indication that while scholarship is by nature a lonely task, Benedict did not desire a lonely life.

The new movements have more of a family dynamic than religious orders, not least because they tend to include clergy, religious and laity together. Benedict chose a strikingly contemporary model of an episcopal, to say nothing of pontifical, household.

Will Benedict’s imaginative approach to creating a family household from the new movements be a model for other bishops or future popes? Perhaps in the future, but not yet.

Pope Francis has chosen, in an unusual way, what is really a more traditional model. In choosing not to live in the Apostolic Palace, and to permanently reside in the Vatican guesthouse, the possibility of a family dynamic is foreclosed.

In Buenos Aires, Cardinal Jorge Bergoglio had lived alone in an apartment, not the historic archbishop’s residence. A pope cannot really live on his own, but hotel living is something similar, with no household to speak of.

Pope Francis sees a great many people, but he does not live together in a community. There are no permanent secretaries, but rather functionaries who carry out various tasks for a certain period. It is a return to the earlier model of the singular pope being attended to by servants, rather than approximating a family atmosphere.

In these days, the hidden members of Benedict’s household will be more visible, giving a glimpse into a groundbreaking aspect of his pontificate. They will be mourning him not so much as a pope but as a member of the family.