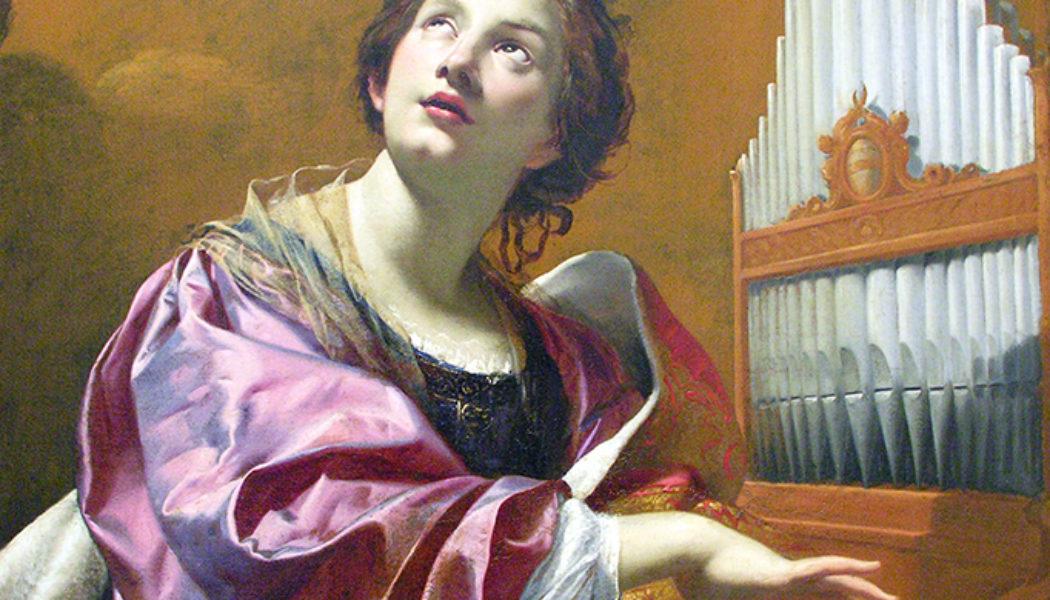 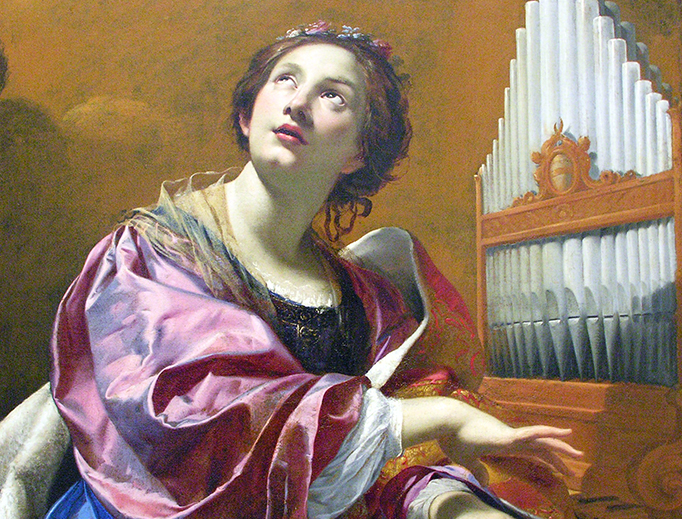 Nov. 22 is the feast of St. Cecilia, for centuries one of the most beloved martyrs. Her name occurs in the centuries-old Roman Canon of the Mass, also known as the First Eucharistic Prayer. The Basilica of St. Cecilia in Rome’s Trastevere neighborhood is one of the loveliest in the city, and stands over the remains of her palace (you can go down into the crypt to see the saint’s home). And Cecilia is revered as the patron saint of music and musicians because, the legend says, on her wedding day, when the hired musicians sang bawdy songs, she sang a song to Christ in her heart.

After her martyrdom, Cecilia was buried in a catacomb outside the walls of Rome just off the Appian Way. That catacomb is known as St. Callixtus.

We can pinpoint the day when interest in the catacombs was reawakened — May 31, 1578. That day, workers on the Via Salaria Nuova were digging up volcanic stone known as pozzolana. Suddenly they broke into a long-forgotten catacomb that ran beneath the vineyard. Exploration of the catacomb revealed sarcophagi, inscriptions, and paintings of scenes from the Old and New Testaments.

The discovery caused a sensation in Rome. It also ramped up one of the greatest points of contention between Catholics and Protestants: the veneration of sacred images. Protestants liked to portray themselves as the true heirs of the ancient Christians, while dismissing Catholics as interlopers who introduced all manner of pagan corruptions into the Christian Church, among these the veneration of images, which Protestants regarded as idolatry. The discovery of a catacomb filled with sacred art delighted Catholic apologists and discomfited their Protestant opponents.

The discovery inspired three amateurs, a Spanish Dominican priest, Alfonso Chacon, a Flemish layman, Philip de Winghe, and a French layman, Ioanne L’Heureux, to search for other catacombs and to make a preliminary study of these ancient Christian burial places. The three rediscovered the catacombs of St. Priscilla, St. Valentine, Sts. Peter and Marcellinus, and St. Callixtus. None of these men were trained archaeologists (the science did not exist at the time), but their work was a start.

For almost 300 years, exploration of the catacombs was haphazard, until a young Italian named Giovanni Battista De Rossi (1822-1894) accepted a post in the Vatican Library, where he took special interest in cataloguing early Christian inscriptions. Soon he was tramping around the outskirts of Rome, looking for signs of long-forgotten subterranean cemeteries. He found about 10.

One day in 1849, De Rossi was examining a vineyard on the Appian Way. In a cellar he found a broken marble tablet that bore an incomplete inscription: NELIUS. MARTYR. From a seventh-century guide to the catacombs, De Rossi knew that after his martyrdom in 253, Pope St. Cornelius had been buried nearby. De Rossi appealed to Pope Pius IX to purchase this vineyard as well as the vineyard adjoining it so he could begin an excavation. Pius bought the land, and De Rossi began a dig at what he discovered was the ancient St. Callixtus catacomb.

Among other treasures, he found the other half of the grave slab: it bore the letters COR and beneath Pope Cornelius’ name, EP, an abbreviation of EPISCOPUS, meaning “bishop.” De Rossi even found the chamber where St. Cornelius had been buried in the Crypt of Lucina, a Christian and a member of wealthy noble Roman family. Like many other well-to-do Christians of the time, she made room for the bodies of martyrs in her family tomb. By doing so, Lucina was not merely practicing the virtue of charity, she was also securing for herself and her family the prayers of St. Cornelius. Since his body was buried among Lucina’s family, the martyred pope could be relied upon to intercede for her and all her relatives.

As De Rossi continued his explorations, he found the original tombs of St. Cecilia and of St. Tarsicius, an adolescent boy who gave his life rather than permit a pagan mob to desecrate the Blessed Sacrament. Perhaps most wonderful of all was a chapel where nine popes of the third and fourth centuries had been buried.

Naturally, De Rossi reported his find to Pope Pius IX, and May 11, 1854, the pope, with a small entourage, arrived at the catacomb. De Rossi led his visitors to the chapel of the popes. In his memoirs De Rossi records the pope saying, “So these, then, really are the tombstones of the first successors of Peter, the tombs of my predecessors who now repose here?” De Rossi assured him that was correct, then he handed to Pius several of the tomb slabs of the martyred popes. The pope’s eyes filled with tears. He knelt and prayed.

In many cases the original tombs of the martyrs that De Rossi discovered were empty, the relics having been moved centuries earlier to churches in the city. The bones of St. Cecilia lay in the beautiful basilica built over her mansion, and the bones of St. Tarsicius were placed in the Church of San Silvestro in Capite. But there were many graves that remained intact, with the bones of martyrs preserved inside. Many of these saints were new to the Church — their names did not appear on the Roman Martyrology, the ancient list of martyrs from the first centuries of the Church.

When such tombs were found, the bones, the inscription on the tomb slab, and any objects found within the grave were examined by historians and physicians for evidence that the deceased had been a Christian and died a violent death. For example, in 1853 during excavations at the Cemetery of Pretextatus on the Appian Way, the work crew found an intact tomb. The slab bore the inscription:

TO THE SOUL OF THE INNOCENT AND PURE VIBIANA, LAID AWAY THE DAY BEFORE THE KALENDS OF SEPTEMBER” (Aug. 31).

The slab bore a carving of a laurel wreath, a Christian symbol for a martyr. Inside the tomb was the skeleton of a young woman and a small glass vial. It was a custom among the early Roman Christians to collect some of a martyr’s blood (if possible) and place it in the tomb. After examining the bones, physicians concluded that Vibiana had died in a violent manner. The report regarding Vibiana eventually reached Pope Pius IX, who exercised his authority to declare Vibiana a saint.

By chance, a few weeks later, Thaddeus Amat, the new bishop of Monterey, California, arrived in Rome for a private audience with the pope. In Rome, the United States was regarded as mission territory, no different than the Congo or China. During his audience with Bishop Amat, Pope Pius had an inspiration: he presented the relics of St. Vibiana to the diocese of Monterey, to be enshrined in the cathedral. Today the relics of Vibiana are enshrined in the Cathedral of Our Lady of the Angels in Los Angeles.

And Bishop Amat’s diocese was not the only one in America to receive the relics of an early Roman martyr. Old St. Mary’s Church in Cincinnati, Ohio, was given the relics of St. Martura. The Redemptorist Fathers who staffed the Church of the Most Holy Redeemer in New York City were given the relics of St. Datian. The relics of a child-martyr, 8-year-old St. Cessianus, was Pope Pius’ gift to the bishop of Dubuque, Iowa; the relics lie beneath the main altar of the Cathedral of St. Raphael. The skeletons of two martyrs, St. Bonosa and St. Magnus were enshrined in the Church of St. Martin of Tours, in Louisville, Kentucky. The chapel of the Sisters of the Precious Blood in Maria Stein, Ohio, preserves the relics of SS. Concordia, Victoria, Innocent, Cruser and Rogatus. And the skeleton of St. Demetrius can be found in Pittsburgh’s St. Anthony’s Chapel, home to the largest collection of sacred relics in the United States.

When he began an excavation, De Rossi never knew what he would discover. St. Callixtus is his greatest find. As beautiful as the basilica of St. Cecilia is, it is a much powerful experience to wander through poorly lit underground tunnels to the place where the persecuted Christians of Rome carried her body and buried it among a host of martyrs.