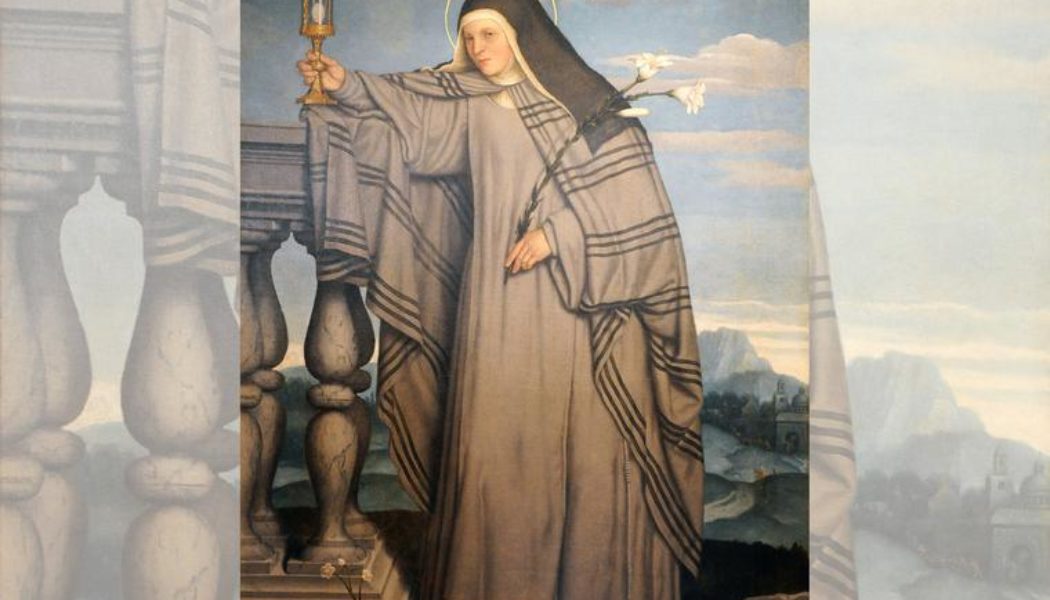 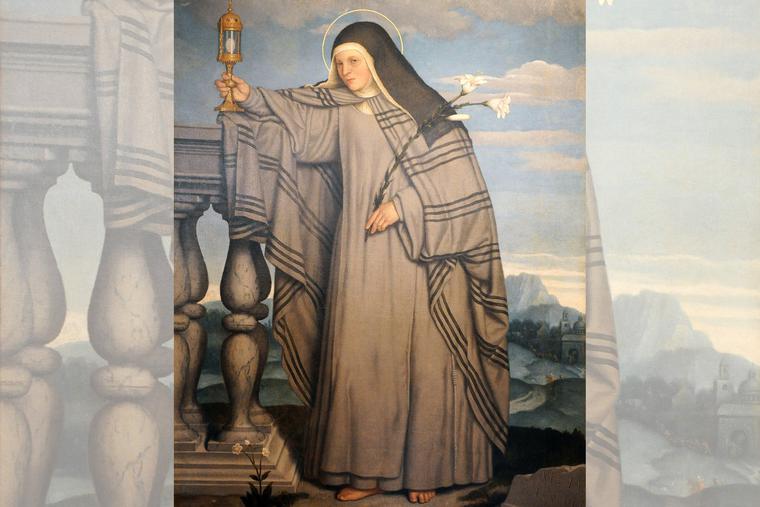 SAINTS & ART: St. Clare remains very relevant to women of all times, including our own.

Chiara Offreduccio (1194-1253) came into the world in a wealthy family in Assisi but, like her spiritual mentor St. Francis of Assisi, renounced the world to follow Christ in a life of strict poverty. She founded and wrote the rule for Order of Poor Ladies which, after her death, would be known as the Order of Poor Clares, the second branch of the Franciscan Order (the male branch, which existed prior to it, being the first).

Like St. Francis and like St. Dominic, whose feast we marked earlier this week, Clare did not find the decision to enter the religious life without resistance from her family. It’s said that Clare heard St. Francis preach during Lent 1212 and decided to follow in his footsteps. On the night of Palm Sunday, together with her aunt Bianca and another companion, Clare left her father’s house, made her way to the Portiuncula Chapel and there on March 20, 1212, traded her elegant dress for the rough tunic and veil of a religious woman.

As something new, where to “put” Clare and her female community led to their initially living with some Benedictines. She moved among several Benedictine houses, as her father initially tried to take her back home. Eventually, however, Clare was left in peace. Her younger sister, Agnes, would join her. Eventually, they settled into a house in San Damiano, near Assisi.

The Benedictine nexus would continue in different forms. St. Francis had sketched only a very rudimentary rule of life for Clare and her sisters. The Holy See eventually supplemented it by adapting the Rule of St. Benedict, the famous model for almost all subsequent religious orders. But St. Benedict did not provide for absolute poverty: although individual members of the community were committed to a vow of poverty, the community as a whole could hold property.

St. Clare resisted this concession, even though the Holy See had made the provision because — unlike the itinerant men’s order — these female Franciscans would be settled and contemplative. Although the concession to communal property was intended to ensure the contemplative community’s stability and security, St. Clare insisted their stability and security was in Christ, not possessions. In the end, Pope Gregory IX guaranteed them the privilegium paupertatis, ensuring the nuns could not be forced to hold possessions.

From 1215 until her death in 1243, Clare was superior, abbess of the San Damiano community. She outlived St. Francis by almost 27 years. When St. Francis was to be buried, the funeral procession deliberately passed by the “Poor Ladies’” Chapel in San Damiano so that the contemplatives could mourn the spiritual father who inspired their own community. The great artist Giotto, whose life spanned the last third of the 13th to roughly the first third of the 14th centuries, captured the moment in a fresco from 1300.

St. Clare herself was eventually buried in Assisi, against the wishes of her sisters who wanted to keep her mortal remains at San Damiano. The spread of her own cult, her involvement in the rescue of Assisi (discussed below), and the local pride in two saints — Francis and Clare — led to the construction of a church to hold her body.

First, she wears a rough religious habit and veil and, in keeping with her community’s poverty, was discalced, i.e., barefoot.

Second, in her left hand she bears lilies, signs of her virginity that she offered in consecration to God. More flowers grow at her right foot.

Third, in her right hand, she bears the Holy Eucharist. Clare had developed a profound Eucharistic spirituality, which was central to her order. But this particular episode alludes to events connected with the Holy Roman Emperor Frederick II’s two attempts to seize Assisi. On the first occasion, in 1234, St. Clare is said to have brought the Eucharist in a ciborium to the walls of the city, which Frederick’s troops were about the scale. The vision of the Lord’s Presence drove them off. When they subsequently returned, Clare and her sisters prayed for the city’s deliverance. A storm arose, scattering the threatening army’s tents, and they retreated, leaving Assisi in peace. Moroni’s painting shows Assisi’s walls as well as the hills of Umbria in the distance.

A woman dedicated to Christ’s will who was not going to let others divert her from it, a woman ready to risk it all by absolute reliance on Divine Providence through absolute poverty, a woman who consecrated her beauty and virginity to Christ, and a woman devoted to the Eucharist: St. Clare remains very relevant to women of all times, including our own.