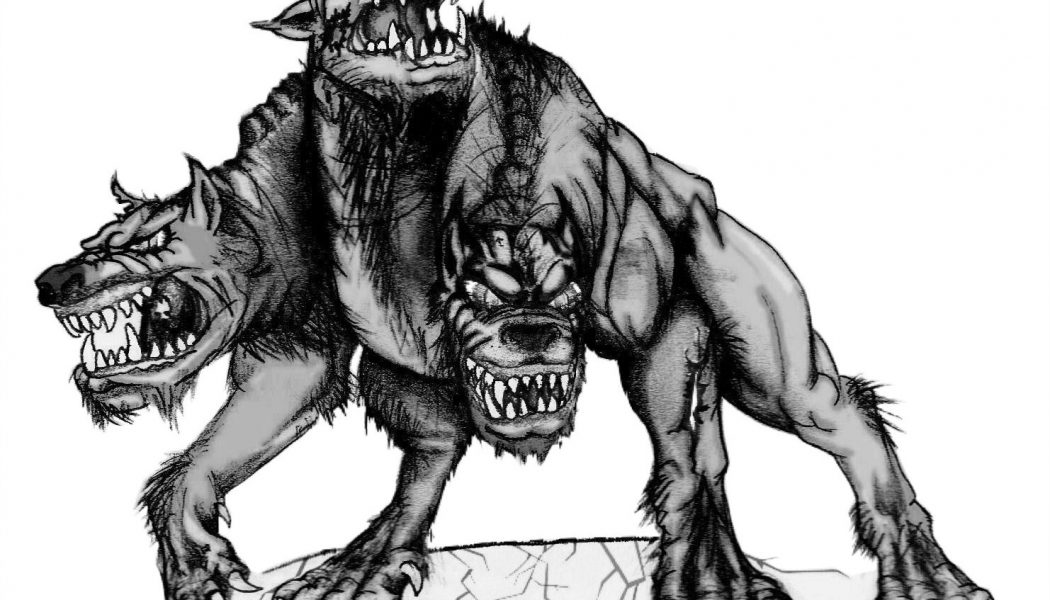 This is my favorite time of the year. Not only is the beginning of Autumn the most beautiful season, but I love this ten days in the church calendar: St Michael, St Jerome, St Therese, St Francis, St Faustina, Our Lady of the Rosary.

I was pleased to see therefore that Pope Francis has called on us to pray the rosary especially this month to counter the devil.

St Michael is one of the great warriors in that battle because he is the prince of the heavenly host.

Here’s one of the reasons I love the angels: because just by the existence of this feast in the church calendar we knock a couple of monstrous modernist heresies on the head.

The monster I’m thinking of is that three headed hound from hell–that mockery of the Holy Trinity–Cerberus. The three heads of Cerberus are Materialism, Scientism and Symbolist Reductionism.

And the angels trample on those voracious heads.

Let me explain: The angels are God’s invisible messengers. They speed to do his will and are real, but usually not visible to us. By affirming their existence we also affirm the reality of the whole invisible realm, and by doing this we acknowledge the reality of the interchange between this physical world and the spiritual realm. We also affirm that this is really what religion is all about.

Whoa! Don’t get all huffy and think that I disapprove of all those worthy causes. I don’t I think they’re just fine.

I say all that to say this: the three headed hound would have us believe that there is no “other world” its all pretend. It’s make believe and angels are in the same category as the good fairy, Tinkerbell and leprechauns.

Scientism is the heresy that teaches that the only form of knowledge which is valid is that which is proven through scientific research. In other words, if you don’t have the scientific data–fuhgeddaboudit. This regularly surfaces as atheists asking for “evidence” for the existence of God.

Materialism is not simply going to the Mall to shop until you drop. Materialism is the belief that there is nothing more than this physical realm. What you see is what you get. There is no heaven, no hell, no angels, no demons, no miracles and if there is a God he is asleep on a cloud somewhere and is never involved in this physical world.

The third heresy is the most insidious and the one you find in modernist church circles. For want of a better name I call it “symbolist reductionism”–which is a fancy way of saying a person reduces a real supernatural concept to a mere symbol. This theological sleight of hand enables modern churchmen to say they believe in angels, but what they don’t tell you is that they only believe in them as symbols. So when pressed they might say, “Oh yes. Angels! Wonderful! St Michael is such a powerful image of the triumph of good over evil.” Or they might say, “Angels! What inspiring agents of all that is beautiful, spiritual and true!”

What does it mean to pray against “the devil”. The devil is a real, objective, spiritual personality who is a fallen angel, a created being, the opposite of St Michael. The devil should not be understood as “the personification of evil” or “a powerful symbol of the dark forces all around us.”

Anyone who has witnessed an exorcism knows the devil and demons are real.

If the devil is just a symbol, then to hell with it. This symbolic version of “the devil” means no more than when your Aunt Sally says about your Uncle Bill the alcoholic, “Oh, poor Bill. It’s the demon drink that’s got him again.” She doesn’t really believe that Uncle Bill is possessed by diabolical spirits from the pit of hell. She is using the word “demon” as a symbol for Uncle Bill’s addiction.

On this feast of St Michael we should be more informed about the nature of evil in the world and the devil’s dark deceptions. This is the theme of my book Immortal Combat – Confronting the Heart of Darkness.

In the new video section of the blog you can also tap into the Deep Dive online course I conducted this summer on Immortal Combat. The lectures are recorded. You can check them out here.

I’d also like to recommend my book Praying the Rosary for Spiritual Warfare. My two Screwtape Letters type books–Gargoyle Code and Slubgrip Instructs are also good ammunition for the Spiritual Battle and the two are on special offer together here.

While we’re at it we might pray to counter those three heresies of scientism, materialism and symbolist reductionism.

The prayer to St Michael should be part of your daily routine:

St. Michael the Archangel, defend us in battle, be our protection against the wickedness and snares of the devil.  May God rebuke him we humbly pray; and do thou, O Prince of the Heavenly host, by the power of God, cast into hell Satan and all the evil spirits who prowl about the world seeking the ruin of souls.
Amen.