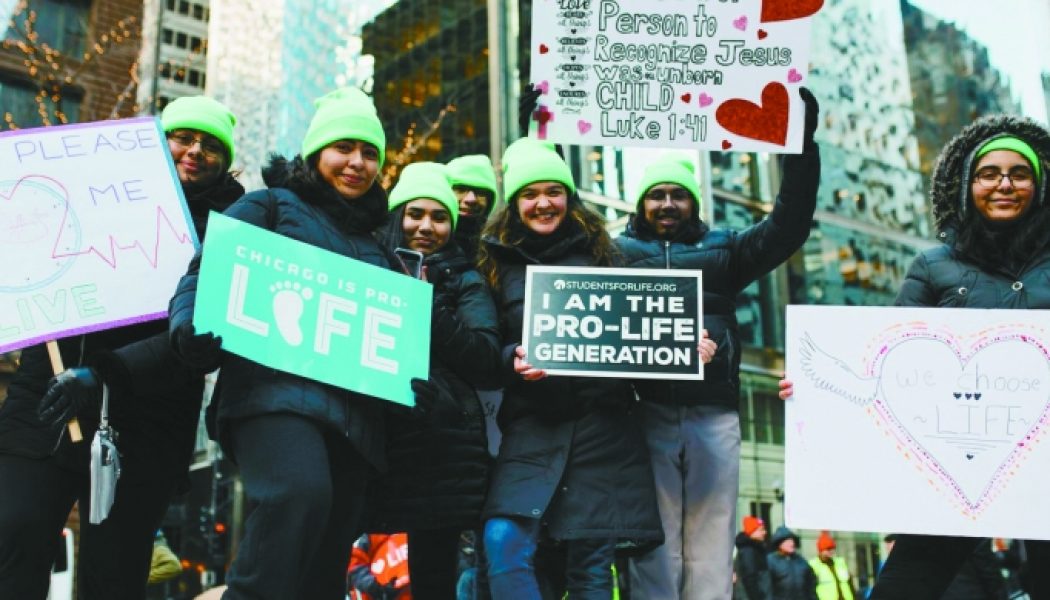 From the streets of Dallas to Chicago (below) and San Francisco (above), thousands of pro-lifers will take a stand for the unborn this month. (2019 photos, courtesy of Catholic Pro-Life Community, March for Life Chicago and West Coast Walk for Life)

Events around the country reflect heart of the cause.

WASHINGTON — On Jan. 24, tens of thousands of people will be part of this year’s annual March for Life in Washington. Tens of thousands more — adults, teens, school groups and families who cannot travel to the nation’s capital — will be marching in 30-plus companion events held on different days in states across the country, praying for the end of abortion.

The earliest companion marches and walks were scheduled to begin Jan. 10-11. One of the largest is the March for Life Chicago 2020 (MarchforLifeChicagoConvention.org), whose theme this year is “Life Empowers: Pro-Life Is Pro-Woman.”

“We’re expecting it to be huge,” said board president Dawn Fitzpatrick before the event. Because the march was moved from a Sunday to a Saturday, she predicted, “It’s going to encourage so many of the other Midwesterners to come to the city to join us.” Fitzpatrick anticipated an even larger number than the 2019 contingent of nearly 9,000 marchers.

This year’s change in location to downtown’s Daley Plaza and its adjacent spillover space was meant to accommodate the expected increase in numbers.

Another major change to draw larger crowds was the move to an earlier date. “We also wanted to give people the opportunity to go to Washington for the march because a lot of people like to do both,” Fitzpatrick said. This year’s speaker lineup included Cardinal Blase Cupich, Chicago Bears owner Pat McCaskey, U.S. Rep. Dan Lipinski and abortion survivor Claire Culwell as the keynote speaker.

This year Chicago’s event for the first time paired the march with a convention featuring pro-life organizations from across the United States and a young-adult evening event. Fitzpatrick saw it as “an opportunity to meet others” and exchange “pro-life ideas and activities to bring to their communities” because “we need to stand up for the sanctity of life all year long.”

“What started in Dallas should end in Dallas,” said Becky Visosky, executive director of the Catholic Pro-Life Community, the respect- life ministry of the Diocese of Dallas (ProLifeDallas.org). On Jan. 18 the North Texas March for Life again was to gather thousands to march from the Cathedral-Shrine of the Virgin of Guadalupe in downtown Dallas to the rally outside the Earle Cabell Federal Courthouse, the district court where Roe v. Wade was first filed in 1970.

In some years the rally sponsored by the Catholic Pro-Life Committee/Pro-Life Dallas, Diocese of Fort Worth Respect Life Committee, and Texans for Life has drawn upward of 12,000 marchers.

The Dallas events were to include prayer vigils outside two local abortion facilities, a youth rally, and the traditional memorial Mass at the cathedral, where in a procession a person born in each year since Roe v. Wade carries a rose representing the million persons not born that particular year. As Visokay said, “It’s a profound way to start the day.”

“Truth Transcends” is this year’s theme, and among the event’s speakers, abortion survivor Claire Culwell was named a headliner; she will also speak at the March for Life in Washington. After miraculously surviving the abortion that took the life of her twin sister, she was born two months premature, adopted, and, in 2009, reconnected with her birth mother. Visokay said that particularly with legislation for abortion to the point of birth being considered in various states, it’s “so much more relevant to have Claire speak.”

Jan. 18 in Los Angeles, OneLife LA (OneLifeLA.org) was scheduled to include a Youth/Young Adult Rally, one-mile walk and “Requiem Mass for the Unborn” at the Cathedral of Our Lady of the Angels. In 2019 approximately 25,000 Californians joined the Los Angeles rally.

Looking at this year, Kathleen Domingo, senior director of the Office of Life, Justice & Peace in the Archdiocese of Los Angeles, said, “As a general rule, we count our success not in terms of people who join us that day but by the work done during the year by the people who attend.” The real work for life is done every day throughout the year, such as helping women in crisis, families in need and those in vulnerable communities, she added. “That was part of the founding vision of Archbishop [José] Gomez.” This rally “has to be an inspiration and a catalyst, a starting point, not an ending point.”

Expectations are for the numbers attending to remain stable, as they have in the past few years, at an estimated 50,000. Co-founder of the walk Eva Muntean told the Register that the numbers remain so “because of the growth in events in other West Coast cites — particularly OneLifeLA and Walk for Life in San Diego.”

At the same time, Muntean expects “a great, young, diverse — multiethnic, multifaith and even secular — participation. A hallmark of the Walk for Life West Coast, from our very beginnings in 2005, has been the overwhelming numbers of young people: high-schoolers, grade-schoolers, Students for Life groups from all Bay Area colleges and universities — you name it.”

This year, the event’s speakers include Father Frank Pavone, founder of Priests for Life, and Kathleen Folan, whose story appeared in the Register.

As Muntean noted, “Our theme this year is the same as every year: ‘Abortion Hurts Women.’” She pointed out that “a special focus at the Walk for Life West Coast has also always been how abortion hurts women.” She explained the goals this year remain the same as previous walks: “to be a vocal and visual message that people of the West Coast stand for life, to reach out to women harmed by abortion, and to inform society of the damage done to women by abortion.”

On Jan. 22, Georgia March for Life (GRTL.org) holds a pro-life memorial service at Liberty Plaza then marches through downtown Atlanta.

Georgia Right to Life’s executive director, Zemmie Fleck, anticipates at least the 1,000 marchers who attended in 2019, and likely more,  “because we have families with young children and lots of schools and home-school families that bring their children to the march.”

The same day, Louisiana Life March Southwest takes place in the Louisiana city of Lake Charles. Five others in various state locations are scheduled on different days through Feb. 1.

Sandy Cunningham, communications director for Louisiana Right to Life told the Register they can be collectively called “Louisiana Life Marches” (ProLifeLouisiana.org/events). “In 2019 we grew the Louisiana Life March from three events to five events,” she pointed out. “Our largest crowd of about 7,000 people was in central Louisiana (Alexandria). In all, more than 20,000 Louisiana citizens marched for life at one of our local events.”

This year’s expectations envision increased crowds at each of the five events, especially the newer events in Monroe and Lake Charles.

With this year’s theme of “Louisiana Loves Life,” Cunningham emphasized that there will be “a strong push to get the vote out and get the word out during the life marches” for the planned November 2020 state ballot that would declare no right to abortion or the funding of abortion in the state Constitution.

The day after the March for Life in Washington, on Jan. 25, the Texas Rally for Life (TexasRallyforLife.org) in the state capital of Austin will begin with a prayer vigil near the city’s Planned Parenthood and include a Divine Mercy Chaplet and Masses at two parish churches.

Amy O’Donnell, director of communications for Texas Alliance for Life, said that 2019’s rally drew a police-estimated 10,000 supporters, and she hopes this year there will be between 10,000 and 15,000, highlighting additions such as a gospel choir being part of the rally. Claire Culwell will speak at this event, too.

Culwell is grateful to speak at these events because she said she gets “to put that name and face and story on the unborn child and on the woman” like her birth mother, “who felt she had no choice and felt she had nobody who was advocating for her and helps us understand what we can do for her and help her along the way.”

“The marches are important for that one day, but more so for the entire year,” she added.

“It’s going to educate people with the tools they need and the empowerment they need to go home into their own communities and their families and talk about these important issues.”

Culwell thought abortion was something that never would affect her and her family.

“I was so wrong,” she explained to the Register.

“For 21 years I had no idea I had actually survived an abortion. There are people in our own families and the pews of our churches who are silently suffering from a past abortion or the choice they made. The marches will empower people to do something, to make a stand for something that is right and good and give them the tools they need to do that.”