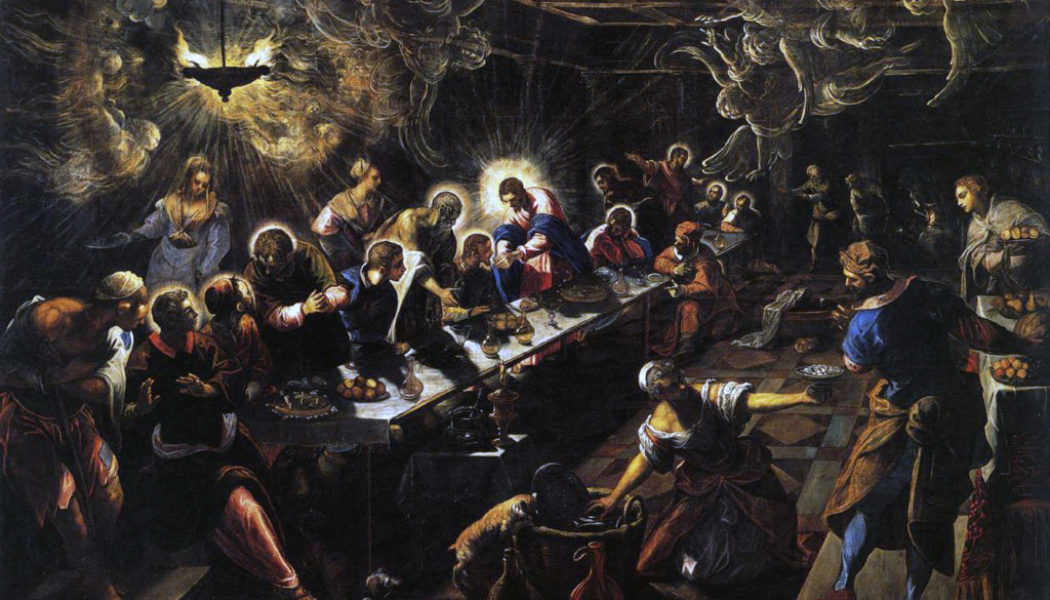 In a recent column about Mary Magdalene, I wrote that my favorite portrait of the great saint was by Domenico Robusti, known to the world as Domenico Tintoretto. But I also noted that it’s his father, Jacopo, who is the painter most often being referred to by the name Tintoretto.

I didn’t explain an interesting thing about that name. Unlike Michelangelo Merisi da Caravaggio, who is known by that last name, which is actually the place of his birth, there’s no place called Tintoretto. It’s a nickname meaning “little dyer.” Jacopo’s father, Battista (like the father of St. Francis of Assisi) was a cloth merchant who dyed dry goods – a tintore. Jacopo, probably not Domenico, got his start in life working for his father.

As an artist, of course, Domenico learned much from Jacopo.

Jacopo Tintoretto (1518-1594) is not, in my view, history’s greatest painter (that’s Caravaggio). But he was a visionary who imagined Biblical scenes with a boldness equaled by few other artists.

Through art, we sometimes see matters of faith and history in new ways, large and small. In referring to “large,” I don’t mean “canvases” of massive size (e.g., Michelangelo’s Sistine Chapel frescos). I’m talking about renditions of familiar stories that fairly explode our usual impressions of holy people and sacred events.

Paintings of Biblical scenes are often reverent to the point of sedate, static. And artists tend to focus solely on the principals of the story. Jacopo Tintoretto didn’t do that.

For instance, his Wedding Feast at Cana (1561), which is a big picture (14.4 ft x 19.3 ft and located in the church of Santa Maria della Salute in the “most-serene” city of Venice, Italy), contains nearly fifty characters. Tintoretto shows us the moment that they’ve run out of wine. The painting is filled with busy, happy, conversing people, who are about to become busier, happier, and a lot more talkative.

But that’s not the painting I want to discuss.

Tintoretto’s Last Supper (c. 1593, also in Venice but at the church of San Giorgio Maggiore) is like his Cana painting: it’s full of people and action. In artistic renditions of the Last Supper – from Leonardo da Vinci’s (c. 1495–1498) to Salvador Dalí’s (1955) – we’ve come to expect a tableau of a baker’s dozen of holy people (one of whom is about to become a terrible sinner). But Tintoretto gives us an active Upper Room with twenty-one people and at least a half-a-dozen angels. Our Lord and the Twelve are there, but so are several women, some other servers of the paschal feast, and one orange, tiger-striped cat. (Some say it’s a dog.)

Of Tintoretto’s style, the artist-historian-critic Giorgio Vasari, Tintoretto’s contemporary and author of the 1550 book, The Lives of the Most Excellent Painters, Sculptors, and Architects, called Tintoretto’s work “fantastical, extravagant, bizarre.” Later historians of art have plopped Tintoretto down under the term Mannerist. Honestly, I’m not sure what that means, although I’ve read several explanations, out of which the best I can conclude is that Mannerist artists broke with earlier Renaissance styles and painted in their own manner.

If you look at the work of his older contemporaries, Michelangelo or Raphael, you can see how Tintoretto eschewed their more faithful renditions of human figures and faces. He cared less for how people looked and more about what they were doing.

Tintoretto painted a number of versions of the Last Supper, the first in 1547 and the last, the one under consideration here, circa 1594. Each got fuller and more boisterous, but none was quite so much so as the last.

I think I know why. The painting at San Giorgio Maggiore was done in the last months before his death at 75, and it may indicate an even more vigorous prestezza, the almost furious speed with which he worked. It’s frenzied. And it’s also darker, with a chiaroscuro (light and shade with muted color) that’s almost tenebrist (bright figures set against darkness, à la Caravaggio), which may indicate he hadn’t the energy to overpaint or that his eyes were failing. On the other hand, the first Eucharist did occur after sundown.

The halos of the eleven saintly apostles are muted; Christ’s illuminates the Upper Room.

I also believe Tintoretto’s love of humanity had grown. The people he painted are holy people, of course, but his models and settings were those he saw in Venice with whom he dined and drank and laughed. During his lifetime, there were twenty-three bacari (taverns) in Venice.

And it’s almost certainly the case that Our Lord and his apostles didn’t put together that Passover seder themselves: thus, the “extras” Tintoretto gives us in addition to Our Lord and His apostles.

Less than a week before, Jesus had instructed two disciples to bring a donkey and her colt tied together. “Bring them to me,” He said, adding: “If anyone says anything to you, you shall say, ‘The Lord has need of them,’ and he will send them immediately.” (MT 21:1-3) And, in a similar way, He instructed Peter and John to arrange for a Thursday dining room (Lk 22:10-13):

“Behold, when you have entered the city, a man carrying a jar of water will meet you; follow him into the house which he enters, and tell the householder, ‘The Teacher says to you, ‘Where is the guest room, where I am to eat the Passover with my disciples?’ And he will show you a large upper room furnished; there make ready.” And they went and found it as he had told them; and they prepared the Passover. (Emphasis added)

I doubt “they” means Peter and John themselves did the cooking or the table setting for the seder. They managed it.

Tintoretto gives us the institution of the Eucharist. Christ has broken the unleavened bread. Those saintly eleven sit on the same side of the table with the Lord. Only Judas sits on the other side, ready to leave; such a sad, telling image!

Elizabeth A. Mitchell’s The Masterpiece of the Divine Artist