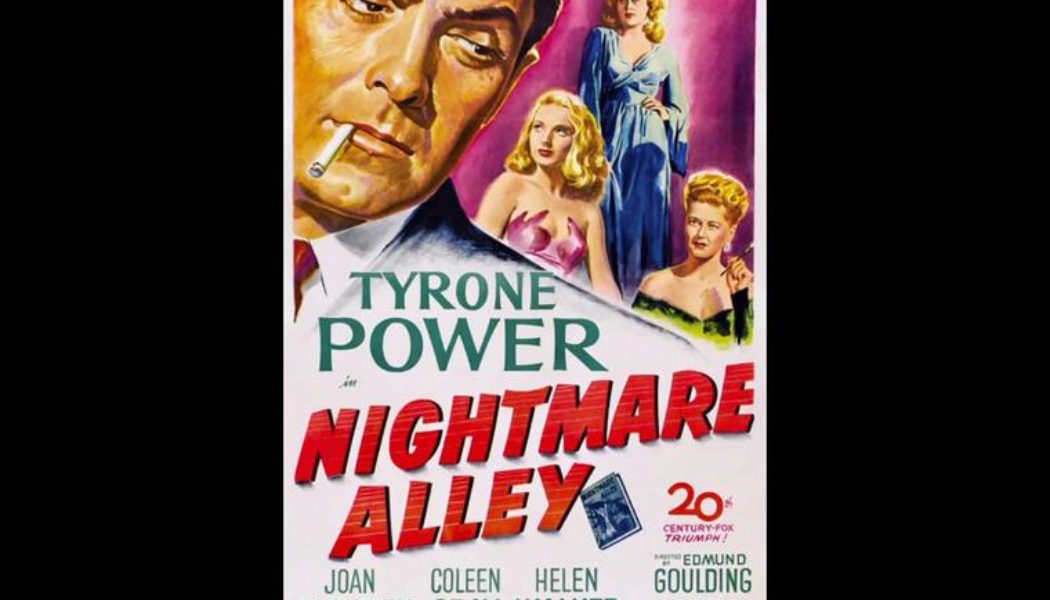 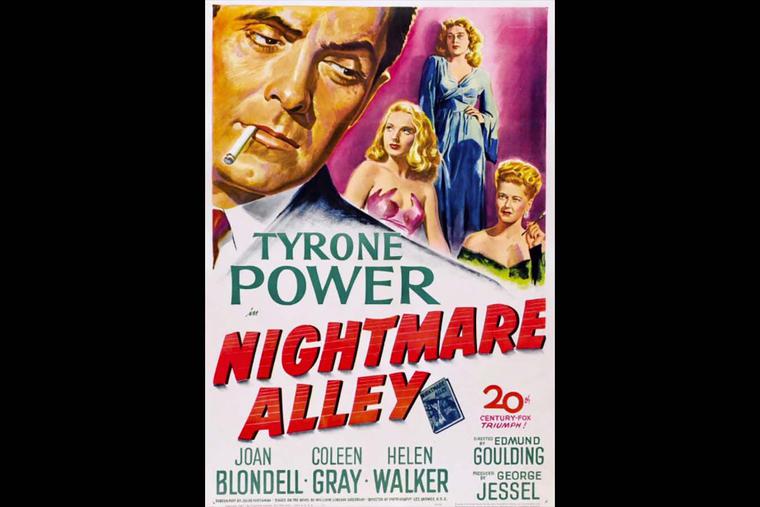 A remake of the 1947 film Nightmare Alley has just been released. Given the ongoing COVID-19 pandemic, the original film is curious source material for today’s cinema audiences.

As the Second World War ended, the 1946 novel Nightmare Alley by William Lindsay Gresham became a bestseller. Largely unknown today, the book’s author was the husband of Joy Davidman, the woman who would subsequently marry C.S. Lewis. Lindsay Gresham had been in Spain in the 1930s aiding the Loyalist side during that country’s civil war. While there, he met a former carnival worker who told him a curious tale. It was from that chance meeting in Europe that Gresham’s 1946 novel emerged.

Perhaps more than any other genre, the film/literary noir suited the mood of Post-War America. Here was a nation that had not yet emerged blinking into the 1950s Technicolor of Eisenhower and later prosperity. America was still dealing with the war and living with its consequences. The strange subject matter of Nightmare Alley fitted easily into the then noir genre — one that was at that time as popular on screen as it was on the page. These films were lit in a monochrome semi-gloom; the dialogue was as sad as it was hard-bitten, with the plots often concluding ambivalently. Gresham’s novel fitted this model perfectly.

The 1947 film Nightmare Abbey made the novel’s plot slightly more palatable for a cinema audience. That the movie is as dark as it is, however, reflects the spirit that hovered over the original work and its author. The story opens at a travelling carnival with a “geek.” The unfortunate “geeks” were often alcoholics or drug addicts, and paid for their labors with liquor — especially during Prohibition — or with narcotics. They were often used as performance-openers for what were more commonly known as freak shows.

As is the case in the Nightmare Alley carnival, the “geek” is both pitied and feared by his fellow carnival workers, not least by Stanton, “Stan,” Carlisle, played by Tyrone Power, a carnival barker. Carlisle has other things on his mind, though: he is intrigued by how much money is being made through the carnival’s fortune teller. Soon Carlisle has embarked upon a new career as a clairvoyant, fortune-telling for a price. It has disastrous consequences for all who come into contact with him, and, inevitably, for Carlisle too. Events quickly spiral out of control as the descent into a bleak tomorrow begins for the man who claimed he had the power to see into the future. By the end, Carlisle has become that thing he feared most: the “geek.” Nightmare Alley has one of the scenes portraying one of the most complete annihilations of the human spirit ever presented on screen. Even watching it today, many decades after its making, it is disturbing.

With hindsight, the casting of Power as the lead character was an inspired choice. Largely unfamiliar to today’s audiences, the Irish-American Power was one of Hollywood’s most popular male leads of the 1930s and 40s. Although not quite as talented an actor as James Stewart or Errol Flynn, Power’s Irish charm and wholesome All-American good looks made him just as much a matinee idol as other more gifted actors.

By the late 1940s, however, Power was looking for a change of direction in his acting career. During the war, he had served, and been decorated, in the United States Air Force, flying missions in the Pacific. Like many of his fellow countrymen, he had left for war while still relatively young, only to return now seemingly much older than his years. His first film role on leaving the military was the 1946 screen adaptation of Somerset Maughan’s The Razor’s Edge. It is the story of an idealistic veteran of the Great War who, dissatisfied with life, seeks refuge and peace in Tibetan mysticism. The movie’s themes fitted the Post-War longing for some sort of escape into a better world. Power’s next movie project was Nightmare Alley. This, too, was about longings, if darker ones.

Doubtless, the somber plotline of Nightmare Alley suited the mood of many of those working on the picture. Looking down the cast list, most of its actors were in the throes of a divorce. Tyrone Power was no exception. He was in the midst of a messy separation from his first wife. Some of the actors’ marital strife doubtless stemmed from the stresses and strains of Hollywood. Other divorces, though, were on account of the recent war. Many had left home, heading for the front with a smile, only to return sullen men. There is something of this grimness in Power’s role in Nightmare Alley. Many critics praised Power’s performance as Carlisle. Some said Power’s fraudulent fortune-teller was, to date, his greatest achievement. Maybe that was because the story of a disillusioned man on the make now fitted the movie star perfectly.

The carefree matinee idol of the pre-war movies in which Power had starred now seemed to belong to a different world. His performances in the 1950s would recall something of his earlier triumphs prior to the war, but even in these films there is an air of jadedness about Power that he cannot seem to shake. At times, it is a look in his eyes, a look that becomes ever more pronounced no matter what the role, no matter what the line spoken, no matter how pretty the leading lady embraced. It is a look that has seen more than it cares to remember, or rather a look that sees through what the world has to offer.

The movie Nightmare Alley had mixed reviews upon release. Soon after, it disappeared from view. Legal wrangles kept it from a video release for many decades. Nevertheless, its reputation grew among cinephiles. Today, watching the film, it appears to have a strange forcefulness, a dark energy. The fake medium’s predictions of wealth and fame sound hollow, even more so now, perhaps, than when spoken decades earlier.

But there is here on screen something else. The darkness that permeates the film, the despair and the rage within its frames, would not seem out of place in today’s world. Perhaps the reason for the 2022 remake? For Nightmare Alley presents a world where there is no salvation, only retribution. There is no truth here, only lies, and with it a punishment coming that cannot be escaped, no matter how hard one tries to evade or rage against it.

There is also an implicit warning within the film. The New York Times film critic noted this when he said, “If one can take any moral value out of Nightmare Alley, it would seem to be that a terrible retribution is the inevitable consequence for him who would mockingly attempt to play God.”

Aged 44, Power died, less than a decade after making Nightmare Alley. A Catholic, he was denied burial in consecrated ground due to his very public divorce.

Sixty years ago, in 1962, aged 53, William Lindsay Gresham, the original novel’s author, killed himself in a Times Square hotel room. A printed business card was found beside him. It read: No Address, No Phone, Retired, No Business, No Money.