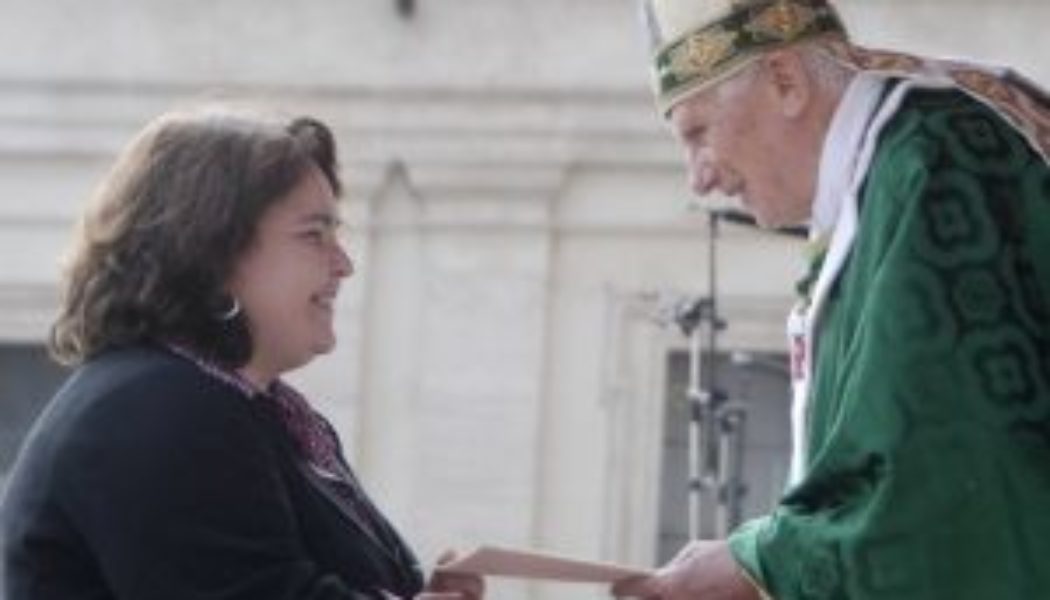 “I’m calling on behalf of the Holy Father.”

The priest from New Jersey working in the Vatican prefaced his words with a plea: “Please don’t hang up on me when I say what I’m about to say.”

He had learned from experience that day. Someone else thought his call was a prank.

It was just a week before the opening Mass of the Year of Faith at St. Peter’s Basilica, also the 50th anniversary of the closing of the Second Vatican Council. I was being invited to receive a message for all the women in the world (I kid you not).

As the official invite from the Pontifical Council for Promoting the New Evangelization put it: “The Holy Father has invited you to be present … in order to receive from him a copy of the message as the representative of women throughout the world.”

The message was a repeat. In 1965, at the end of the council, Pope Paul VI issued “Messages to the People of God” from the Church. Rulers, artists, laborers, and women were among those addressed.

As it was explained to me, Pope Benedict XVI, at the last minute, had the idea to reissue the messages. I didn’t ask him, but I assumed it was because they really hadn’t been communicated the first time around — both because of the fog of the times and a lack of receptivity in the culture.

The message to women he handed me is beautiful and powerful. Some excerpts:

This message is a game changer, and is begging to be convened in Catholic education, in Catholic homes, and to the world. Women don’t need to be anything other than what they are naturally and supernaturally made to be.

In the years since I received that message from Pope Benedict, I’ve thought a lot about how Pope Francis talks about the Church as mother. The Church can’t be mother without women impregnated with the spirit of the Gospel — yes, in leadership roles in the Church, but also as mothers. Being a mother is a critical leadership role in the Church and the world!

I’ll always be grateful to a priest friend who asked me before I headed to Rome, “So, what are you going to say to the Holy Father?”

I hadn’t even considered small talk as a possibility, but sure enough, there was. I thanked him for his triptych — that felt more appropriate than “trilogy” — on Jesus of Nazareth.

Kathryn Jean Lopez meets Pope Benedict XVI and receives a message for all the women in the world. (Courtesy image)

And then, Pope Benedict asked me where I was from. When I told him New York, he was exuberant. With his arms he celebrated the capital of the world — that’s the only way a New Yorker could interpret it. He must have been fondly remembering his 2008 trip there as pontiff. I thanked him for making our archbishop, Timothy Dolan, a cardinal.

Pope Benedict offered some kind, fatherly words in response. But more than any word that was exchanged, I remember his gaze. We cannot know on this earth what it’s like to be met by the gaze of our heavenly Father.

But if the way Pope Benedict looked at me that day is even one inkling of an indication of the magnificence of his love for us … we just have no idea how much we are loved! Pope Benedict didn’t know anything about me, but he knew the Father’s love for me, and his gaze was in union with that reality. What if we looked at others in such a way every day of our lives?

I almost didn’t make it to meet him that day. I had travel hiccups like I’d never experienced before and never have since. I can’t even begin to tell you the travails: an angel changed my flight as I sat in traffic between two Queens airports. When I finally landed at Fiumicino Airport, that priest from New Jersey and I nearly died in a car accident on the way into the city. Few times in my life have I felt: God, you must have me here for a reason.

My late friend, Kate O’Beirne, would tease me from then on about not sharing the message as much as “the representative of all the women of the world” ought to. At this time of his passing, I thank God for Pope Benedict giving me the opportunity to share it again.

May he come to intercede for us women so that we can be everything God made us to be in this present moment with all its confusion and chaos. We are called to be beacons of hope in a way only women can be, and to encourage men who want us to work together in complementarity. Pope Benedict knew. May we live it.

Alan here, your hosting expert with a review of a web hosting company called scalahosting. As a live chat support agent, you can work from anywhere as long as you have an internet connection. Top 10 wordpress plugins for real estate websites + beginner & advanced hacks [infographic].