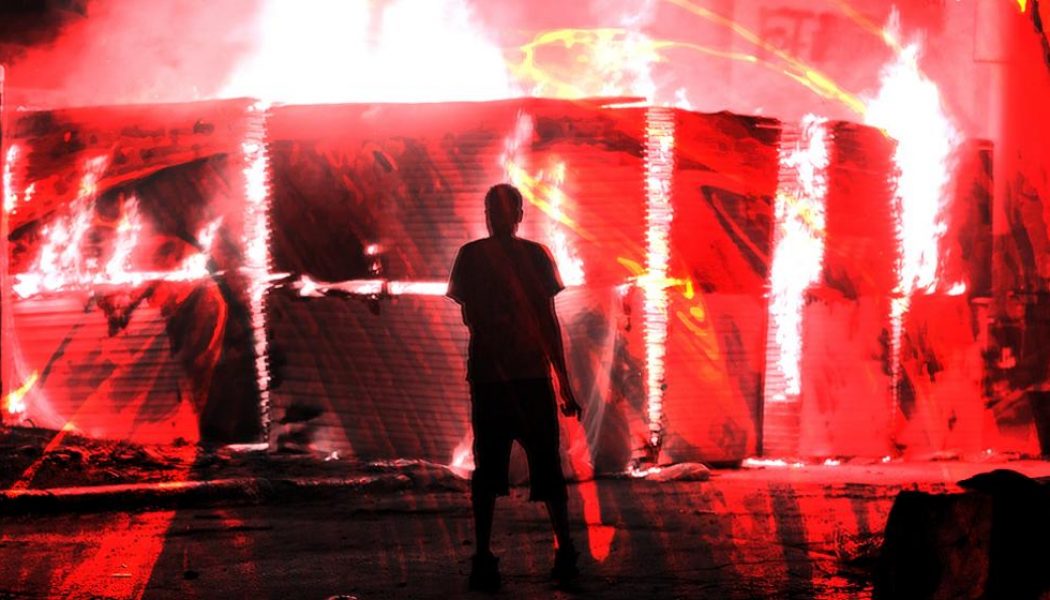 Another indelible image. Or rather a series of them: night fires, masked faces running in and out of burned storefronts, a wheelchair overturned; the burned uniforms, the white teenagers in parodies of revolutionary attire photographing themselves, the journalists arrested; and, simultaneously at the edge and the center of memory, a vivid nightmare: the snuff film of a man held down by the most grimly appropriate choice of appendage until he could breathe only with difficulty and then not at all. The curiously relaxed face of the officer. Intoxicated, but not with authority; a child who smashes a bird’s nest or stomps upon a turtle does not have authority: he has power, brutally and thoughtlessly wielded for its own sake.

I cannot be the only observer for whom the killing of George Floyd in Minneapolis has elicited feelings of despair. Something like this was going to happen. It was going to happen because it is, simply put, the sort of thing that happens in this country: a brute fact, an unremarkable feature of American life. “The habit-forming pain, mismanagement, and grief / We must suffer them all again.”

This grim resignation extends beyond the killing itself to the equally inevitable consequences: protests, rioting, looting; a lunatic cycle of online recrimination and tone policing; the finger-wagging talk about “peaceful protest” from the same quarters in which it was confidently maintained that kneeling during a 19th-century drinking song posed an existential threat to our republic. The conflagration, metaphorical and otherwise, has spread to other cities and will continue to do so. Our long hot summer was always coming.

It is worth thinking about why. As far as I am aware, no one has written at meaningful length about Floyd’s killing in the context of the lockdown and the pandemic it was ostensibly meant to contain. The horrifying truth about our unprecedented shuttering of civilization is that it has revealed virtually nothing about American life that was previously unknown. We have appalling levels of racial disparity in wealth and health. We do not simply ignore our most vulnerable citizens, which would confer upon them the dubious benefit of self-reliance; we actively bring about their harm, in nursing homes and dense housing complexes and blighted post-industrial hellscapes. We are addicted to drugs and alcohol and pornography. We have too many guns. We have a political system in which meaningful response to crises is possible in hideously inverse proportion to their immediacy. We do not, as the sophists, economists, and calculators would put it, “select” for prudence, wisdom, or even baseline competence; American public life is meant to reward moral preening and mindless denunciations of vaguely defined enemies, and those things are exactly what we get from our politicians.

The relationship between all of these problems and the prolonged atomizing of the lockdown is the same as that between gunpowder and a match. Two months ago in this space I wrote that social distancing was going to get darker, and it has: studies project as many as 100,000 additional “deaths of despair” in the months and years to come. Extra-judicial killings of black men (including those carried out by uniformed officers) and non-NFL-approved protests in response were likely enough in the absence of a lockdown; under present conditions they are simply inevitable. Subjecting hundreds of millions of people to ultimately unenforceable restrictions upon their conduct is by definition lawlessness; everyone, including police, regard the letter of the law as meaningless, but at any moment its full weight can be brought to bear upon anyone. This is why as I write this across this country black joggers and gym goers are being treated not as conduits of disease but as criminals; the virus has become a pretext for the evil that was always in our hearts.

What conclusions can be drawn from Minneapolis? One is that millions of us no longer believe (if indeed we ever really did) that there is a meaningful risk of outdoor transmission of the virus, even in very large crowds, especially among the young. This, one assumes, is why there are no scaremongering pieces about the protests along the lines of those that appeared after Wisconsin dared to hold an election two months ago, and why support for the protests and (at least tacitly) the rioting have become conventional wisdom in the same circles in which allowing children to play on monkey bars was only recently considered tantamount to murder. Another is that arguments from white Americans about acceptable forms of protest, which were never tenable anyway, should now be dismissed with contempt. It would be far better to make the forthright argument that no form of protest is acceptable in response to statistical anomalies or (perhaps closer to the actual position being argued) non-crimes. Sooner or later, masks will have to come off.

Want more essential commentary and analysis like this delivered straight to your inbox? Sign up for The Week’s “Today’s best articles” newsletter here.

Withhold not thou thy tender mercies from me, O Lord: let thy lovingkindness and thy truth continually preserve me.
Psalm 40:11
DailyVerses.net