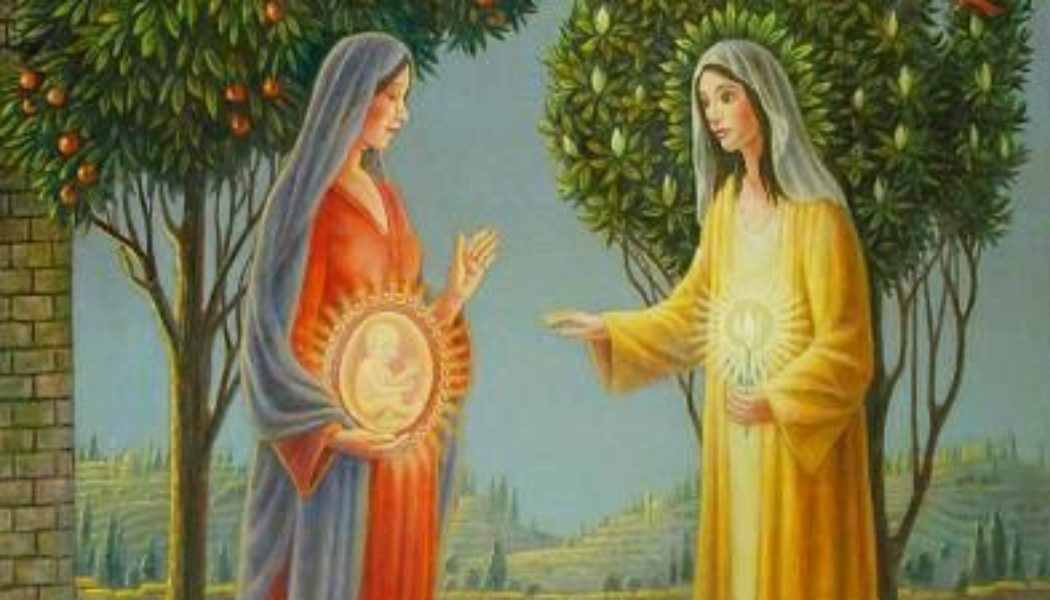 Today’s psalm tells us: “Shout joyfully to God… proclaim his glorious praise. Say to God, ‘How tremendous are your deeds!‘” When the Berlin Wall came down in 1989 and the Soviet Union dissolved two years after, I remember my dad remarking that those were things he thought he would never live to see. It seemed like Russian power would dominate Eastern Europe forever. But then, the Soviet Union suddenly collapsed, something which no one — not even the C.I.A. — saw coming.

At Fatima in 1917, before the Russian Bolshevik Revolution, the Blessed Virgin Mary accurately warned that Russia’s errors spreading throughout the world would cause wars and persecutions of the Church. But Mary said, “In the end, my immaculate heart will triumph.” In 1984, on the Feast of the Annunciation, the day when we celebrate the conception of Jesus in his mother’s womb, Pope St. John Paul the Great consecrated Russia and the whole world to Mary’s immaculate heart. Seven years later in 1991, on Christmas day, when we celebrate Jesus’ birth, Mikhail Gorbachev resigned as leader of the USSR and the Soviet flag was removed from atop the Kremlin forever. The Evil Empire ended, not with millions of deaths from nuclear blasts, but peacefully. This was a great miracle orchestrated by heaven.

“Shout joyfully to God… proclaim his glorious praise. Say to God, ‘How tremendous are your deeds!‘” The Lord has brought about another tremendous victory in our time, and we do right to recognize and joyfully praise his glorious deed.

Once Wisconsin became a state in 1848, we quickly passed laws respecting the sanctity of human life from conception to natural death. In 1849, our state legislature outlawed abortion in all cases (except to preserve the life of the mother) and then, in 1853, our state government abolished capital punishment. Whenever possible, we do not kill people, not even people who are guilty or highly inconvenient, because killing is not the way of Christ and his Kingdom. We are instead to show merciful love for all.

In 1973, Wisconsin was one of thirty U.S. states which prohibited abortion at all stages. But that year, the Supreme Court’s ruling in Roe vs. Wade (a decision which even pro-abortion legal scholars acknowledge lacked constitutional justification) legalized the killing of unborn children everywhere in the United States. In response, for forty-nine years, pro-life people prayed and marched and voted. Through thousands of organizations across the land they provided moms better, holier, more loving options (like adoption) and practical resources (like diapers, formula, cribs, and clothes). Yet, despite their persistent efforts, many pro-lifers doubted they would ever live to see abortion end anywhere in our country. Last month, after seven sets of seven years of prayer and sacrifice, the Supreme Court returned the issue of abortion to the states. Wisconsin abortion laws were never repealed. And so, this Fourth of July weekend, Wisconsin is a pro-life state once again.

Today Isaiah says, “Rejoice with Jerusalem and be glad because of her, all you who love her; exult, exult with her, all you who were mourning over her!” Nurslings shall be carried in her arms and fondled in her lap; they shall now find comfort. “When you see this, your heart shall rejoice… the Lord’s power shall be known to his servants.”

The date on which the Supreme Court overturned Roe vs. Wade (June 24th) is usually the Solemnity of the Nativity of St. John the Baptist. In future years we will mark the anniversary of this victory by celebrating the birth of him who leapt for joy in his mother’s womb in the presence of the newly-conceived Christ. But this year, 2022, St. John’s day was superseded by an even greater feast which is always celebrated on the third Friday after Pentecost. This year, Friday, June 24th was the Solemnity of the Sacred Heart of Jesus. Indeed, in the end, his Sacred Heart has triumphed.

The reversal of Roe is a landmark victory, but of course there remains much work to do. “The harvest is abundant but the laborers are few; so ask the master of the harvest to send out laborers for his harvest,” and be open to being sent yourself. Like the seventy-two in today’s Gospel, Jesus Christ sends us forth to those he seeks to save. Wishing peace on everyone, peace to each house and peace in every household, we shall defend and extend his Kingdom’s Culture of Life throughout this land and around the world. And though literal demons will rage and resist us, we shall not be afraid but prevail, for Jesus, his mother, and the angels are with us for the victory. “When you see this, your heart shall rejoice… the Lord’s power shall be known to his servants.”

This entry was posted on July 2, 2022 at 11:27 pm and is filed under Blessed Virgin Mary, Homily, Human Dignity, Politics, Providence, Sunday Homilies. You can follow any responses to this entry through the RSS 2.0 feed. You can leave a response, or trackback from your own site.

Domain. Offers. How to create real estate business cards that engages prospects and sells your service or product.