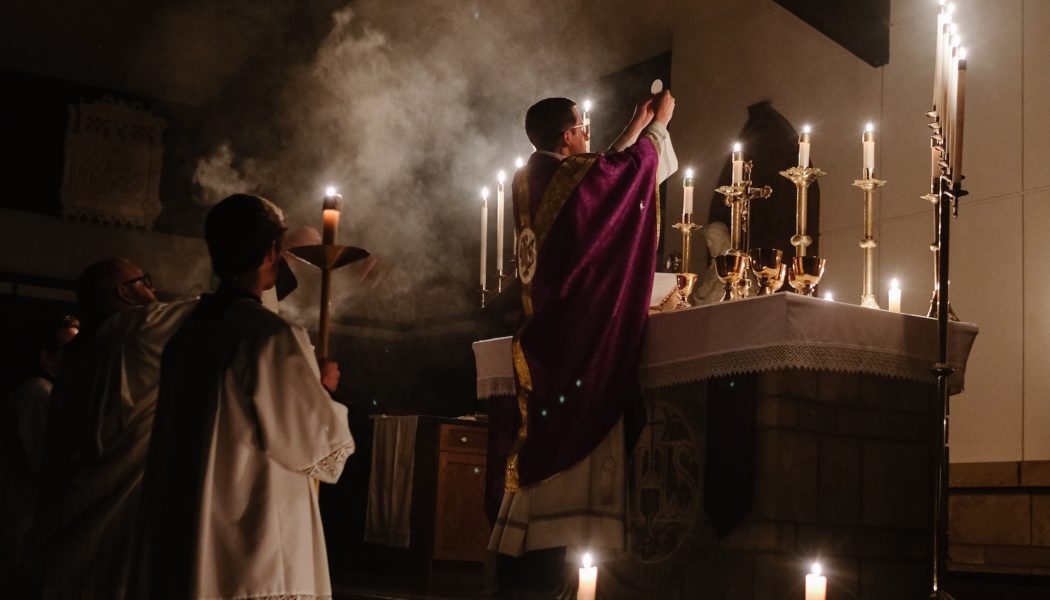 The liturgy has little meaning for people who cannot comprehend its symbolism. Pope Francis laments the modern person, who has “lost the capacity to engage with symbolic action, which is an essential trait of the liturgical act” (Desiderio desideravi, 27).

The materialistic view of secular culture runs contrary to any sort of symbolic understanding of reality or nature. As a result of the eclipse of God, St. John Paul II contends in Evangelium Vitae that the world which was once viewed as mater has become merely matter (22).

In light of the fact that modern culture has lost its sense of symbolism and sacramentality, it seems incomprehensible that Fr. Raymond J. de Souza would argue for a return to the ancient practice of celebrating the liturgy toward the east (ad orientem). Yet as I continue to reflect upon Pope Francis’ call for the need for liturgical formation and greater attention to the ars celebrandi and Joseph Ratzinger’s theology of liturgy, the more I think the time has come for a more generous use of the normative practice of celebrating the liturgy ad orientem.

In their reflection upon the implementation of Vatican II’s liturgical reforms, a well-respected group of theologians, consisting of Fr. Thomas Weinandy, O.F.M., Dr. John Cavadini, and Dr. Mary Healy, maintain the position that the celebration of the liturgy with the priest facing the people (versus populum) is “pastorally and theologically more congruent with the reality of the liturgy as ‘an action of Christ the Priest and of his Body, which is the Church…a sacred action surpassing all others’ (SC §7).”

Contrary to this view, I would contend that the venerable tradition of celebrating the liturgy toward the east (ad orientem) is symbolically and theologically more in keeping with the nature of the liturgy as a cosmic and eschatological sacrifice of Christ the high priest. In a culture that lives only for the present moment and for this world only, there is a need for greater clarity in the cosmological and eschatological nature of the liturgy via the orientation of the priest, the congregation, and the construction of future churches.

Fr. Weinandy et al. contend that celebrating the liturgy versus populum “gives full meaning to what Jesus himself declared and enacted at the Last Supper.” Their position is that the priest, who celebrates the liturgy in persona Christi, “takes the bread and declares to ‘all of’ the faithful that they should ‘take’ and ‘eat of it, for this is my body, which will be given up for you.’” I presume that their emphasis on “all of” and “take” implies that the priest and the people should be facing one another since Christ is addressing the people through His priestly minister. If we were to emphasize the word “for” from the words of consecration, then can we also argue that the focus should be on the sacrifice of the Mass that is offered “for” us?

The Catechism defines the liturgy as the “participation of the People of God in ‘the work of God’” (1069). God’s primary work is the work of redemption, which Jesus Christ the high priest has carried out for our behalf. When the priest offers the liturgy ad orientem, he leads the faithful like Christ the new Moses leading the new Israel in new exodus. When the liturgy is offered ad orientem, the priest is modelling for the rest of the body of Christ what is essential in our Christian exodus: the constant need for conversion—literally a need to turn around (metanoia) toward the Lord.

Throughout his theology of the liturgy, Joseph Ratzinger has added his voice to the arguments of theologians such as Klaus Gamber, Stefan Heid, Louis Bouyer, Albert Gerhards, and Uwe Michael Lang in favor of returning to the ancient practice of liturgy. When Ratzinger presented this thesis in his work The Spirit of the Liturgy, he received much criticism. One of his critics was the prominent liturgist Pierre-Marie Gy, O.P. Ratzinger’s response to Gy offers definitive clarity for his position:

[T]he great tradition of “orientation,” the act of turning toward the “Orient” as the image of the return of Christ, in no way requires that all altars must once again be reversed and that the priest’s place be changed as a consequence…[O]ne can satisfy the internal requirements of this apostolic tradition without undertaking great external transformations, by arranging things such that the Cross…should be the common focal point of the priest and the faithful—such that it is placed in the middle of the altar, and not to the side. The Christ who was crucified and who returns today is the true oriens, the direction of history. He personifies the synthesis of the cosmic and historical orientation of the liturgy, so central in the tradition of prayer towards the Orient.

All of the cosmos is oriented toward Christ, as it awaits the final fruits of the redemption when Christ comes again in the eschaton. Offering the liturgy ad orientem or implementing the compromise of placing a crucifix on the altar (the Benedictine arrangement) can help symbolically reorient the minister and the congregation together toward Christ as the definitive Oriens.

In an article for Homiletic and Pastoral Review (“The Gift of the Liturgical Reform”), Mary Healy has argued that the liturgy versus populum is a more fitting symbol, as Christ the Bridegroom, as represented by the priest acting in persona Christi, faces His bride. It is also fitting that the bridegroom and His bride face the same direction as they turn toward the Lord, who comes to meet them at the altar in the Holy Eucharist. As an eschatological foretaste of the wedding feast of the Lamb, it seems fitting for the Church to face the Lord ad orientem, as He will come again from the east.

St. Thomas Aquinas has also presented various passages from Scripture to remind us of the fittingness of adoration toward the east (See ST, q. 84, a. 3, ad. 3). St. Thomas argues first that the divine majesty is symbolized by the movement of the heavens from the east. Second, Genesis 2:8 indicates that paradise was located in the east, so adoration toward the east is a symbol of our orientation toward our final end. Third, there are various passages from Scripture that emphasize Christ’s return from the east: Zechariah 6:12, Psalm 67:34, and Matthew 24:27. The weight of Scripture and the wisdom of St. Thomas Aquinas should give us more reasons to consider our return to this ancient practice.

If more priests and parishes would consider returning to the practice of offering the liturgy ad orientem or the use of the Benedictine arrangement, then it could provide an ideal opportunity to offer formation on the nature of the liturgy as a cosmic and eschatological sacrifice. The season of Advent is a fitting time to consider the need to face the east:

The act of the priest turning toward the Lord throughout the liturgy also becomes symbolic for the need of all the faithful to constantly reorient themselves back to the Lord in our new exodus. The opportunity for liturgical renewal can begin anew as we reconsider how we can implement ultimate reform: Conversi ad Dominum!—“Turn toward the Lord!”